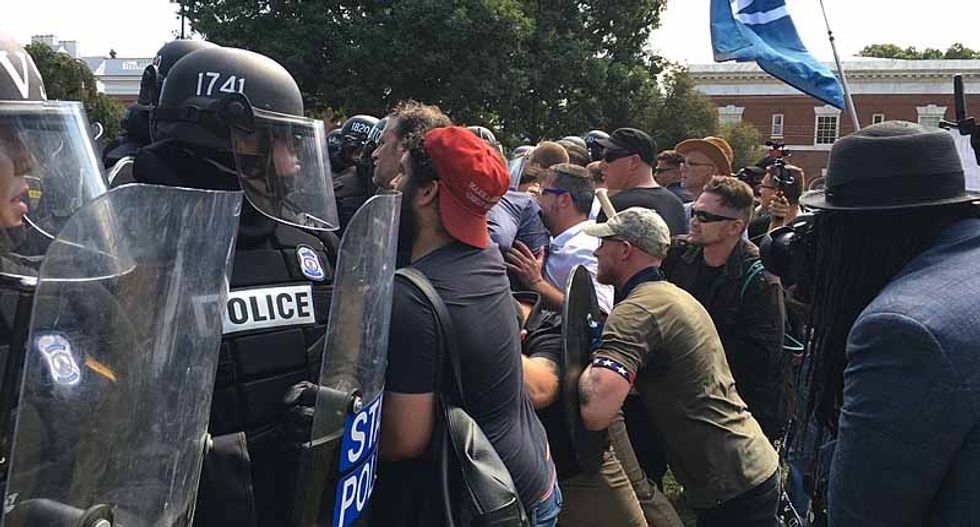 This image was originally posted to Flickr by evannesterak at https://flickr.com/photos/153804281@N02/36421659232. It was reviewed on 16 August 2017 by FlickreviewR and was confirmed to be licensed under the terms of the cc-by-2.0.
Thom Hartmann
and
Independent Media Institute
September 08, 2020Bank

The cover story of the December 2019 edition of The Atlantic magazine, founded itself in the years just before the Civil War, was ominously titled, “How to Stop a Civil War.”

If we are, indeed, on the brink of a second Civil War, it’s already being waged as a “cold war,” with the occasional armed skirmish being provoked by the so-called Alt-Right movement, which, as of summer, 2020, had murdered thousands of Americans since Tim McVeigh kicked off the modern “boogaloo” white supremacy era.

And, as in the past, this would be a war where the very, very rich—the oligarchs—pit Americans against each other, dividing us by class, region, race and religion simply to gain and hold more and more power and wealth.

This is not the first time we’ve faced such a crisis as a nation.

Each time, forces of massive accumulated or inherited wealth have nearly succeeded in taking full control of our nation, replacing a democracy, where the will of the people is accomplished through their elected representatives, with a form of government where most government functions reinforce the power, wealth and control of the morbidly rich.

This system of government is among the most ancient, stretching back 7,000 years, and is known to political scientists as oligarchy. Aristotle put it in context: “Tyranny is a kind of monarchy which has in view the interest of the monarch only; oligarchy has in view the interest of the wealthy; democracy, of the needy…”For oligarchy to totally take down democracy, only three things are initially needed:

The fourth element, when the oligarchy is well established and the transition to tyranny begins, is seizure of the executive branch and the formation of a police state, principally using massive surveillance and selective prosecution against those agitating for a return to democracy.

Arnold Toynbee is said to have noted that “When the last man who remembers the horrors of the last great war dies, the next great war becomes inevitable.”

Most warriors are in their late teens or early twenties; by the time they’ve died, three more 20-year generations have come of age, suggesting, if Toynbee was right, a four-generation (roughly 80 year) gap between terrible, nation-altering events.

In the 1770s-1789 era, foreign-aligned oligarchs controlled what we now call America; believers in democracy fought a war to overthrow that British oligarchy.

Four generations later, in the 1860s, massive wealth was controlled by a few thousand very large plantation oligarchs in the South. The South was politically and police-wise run as a full-blown oligarchy on the verge of total tyranny (which it had been for blacks from the beginning), while the North was still largely democratic (the “Gilded Age” northern oligarchs wouldn’t fully emerge for another 30 years). The Civil War could thus be recast as a war between oligarchy and democracy, where democracy won by a whisker.

Four generations after that, the Republican Great Depression (what they called it until the 1950s) opened the door to Franklin Roosevelt’s “war” against the “economic royalists” (oligarchs), which succeeded in putting them, at least temporarily, in a box despite their explicit efforts, exposed by Marine General Smedley Butler, to overthrow him by force.

Today, four generations after that battle closed with the end of WWII, America’s oligarchs succeeded in getting enough of “their guys” placed on the Supreme Court to legalize political bribery (in 1976/1978) for the first time in American history. That event opened the door to this generation’s oligarchic control of all three branches of government via the Reagan Revolution and the billionaire takeover of the GOP.

All that was left was to get the populace to support a final transition to full-blown oligarchy, a task undertaken by oligarchs who controlled the media, largely through rightwing hate radio, thousands of rightwing websites, and the efforts of billionaire Rupert Murdoch with Fox News and The Wall Street Journal.

As a result, the crisis of oligarchy in America is already upon us; the question is whether it will cement its place, or even morph into tyranny, or whether We, the People will turn it back as we have done twice before in American history.

Are we approaching the end of the great American experiment in representative democracy? Will our children and grandchildren live under a government of, by, and for the People? Or a nation of, by, and for the monopolists and oligarchs, ultimately enforced by a brutal police state?

To answer these questions, it is essential to understand the basic mechanics of the American government.

There are functionally four branches of government in the American model, three explicitly defined in the Constitution and the fourth protected by the First Amendment.

For oligarchy to completely overwhelm and ultimately destroy our democratic republic, turning it into a tyranny, each of these four must be seized by the oligarchs and turned to their service.

The four branches are the legislative, executive, and judicial, followed on by the media, often referred to as “the fourth estate.” The media has always been the initial pivot point, though, both for control of public opinion and, through that, control of the government itself.

Excerpted with permission from The Hidden History of Monopolies: How Big Business Destroyed the American Dream by Thom Hartmann, Berrett-Koehler Publishers 2020. All rights reserved.