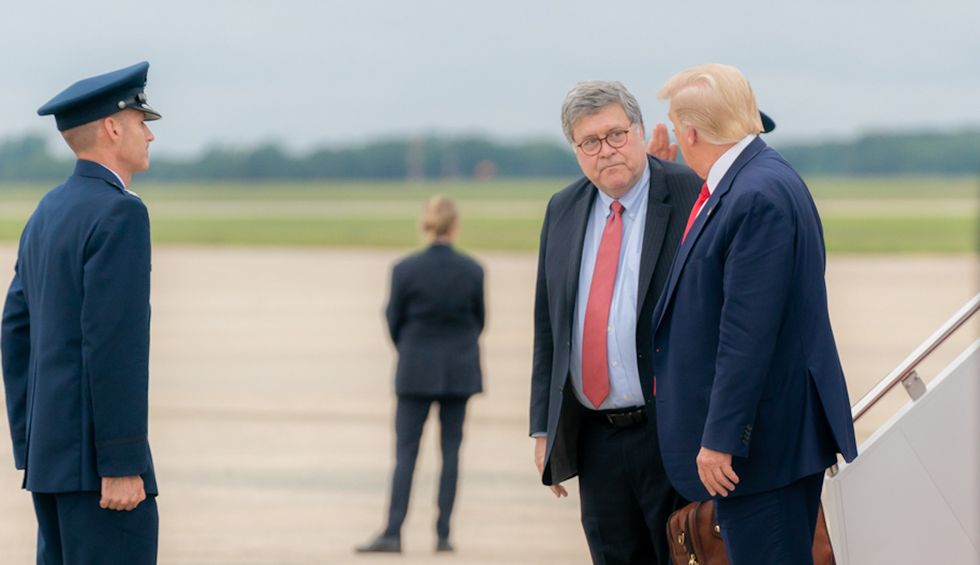 When Attorney General William Barr urged federal prosecutors to charge Black Lives Matter protesters with “sedition;” when he falsely called out American cities such as New York, Portland and Seattle as “anarchist jurisdictions;” when he took the unprecedented step of intervening in the sentencing and criminal conviction of Trump aides Michael Flynn and Roger Stone; and when he dispatched a U.S. attorney named John Durham to “investigate” individuals involved in Special Counsel Robert Mueller’s criminal investigation of the Trump campaign’s dealings with a hostile foreign adversary, it was obvious to even the most dispassionate observers that he was operating the DOJ as an enforcement mechanism for Donald Trump.

But while those actions drew angry accusations that the Department of Justice had been “politicized,” those accusations—while correct-- do not go nearly far enough. In their blatant, arrogant insouciance, Barr’s actions have a much deeper and alarming significance than the simple emergence of Barr as  a corrupt Trump toady at the head of DOJ. In fact, they represent a direct repudiation to this country’s entire system of justice, one that, going forward, threatens to destroy everything that Americans have the right to expect from a nation that supposedly prides itself on following “the rule of law.”

Ankush Zhardori is a former federal prosecutor at the Department of Justice, now based in Washington, D.C. His writing on legal matters has appeared in the Washington Post, the Wall Street Journal, and the New Republic, among others.

In an essay just published in the New York Review of Books, Zhardori explains how the DOJ under the aegis of Barr is undermining what most Americans would consider the “rule of law,” by transforming it into “rule by law,”  in this case, the act of deliberately weaponizing existing law as a vehicle to punish Donald Trump’s political opponents while rewarding his supporters.

In a society nominally dedicated to the “rule of law” (i.e., our society as  Americans commonly understand it), certain assumptions are implicit.  As Zhardori explains:

The concept of the rule of law, developed over centuries, encompasses a variety of principles. Some are formal in nature, like the requirement that the law be publicly available, so that people know what is and is not lawful and can manage their affairs accordingly, while others are procedural, like the right to have legal disputes decided by an independent judiciary... a society governed by the rule of law has general, clear, and accessible rules that apply to everyone, as opposed to one governed by an arbitrary, oppressive power.

In recent years, another, intermediate notion has emerged in academic accounts: rule by law. Jeremy Waldron, a political and legal philosopher at New York University, has summed up the term as referring to “a debased version of the rule of law,” in which a government uses the law as an instrument of the state to achieve its objectives and to control the public, but without being subject itself to legal constraints in the same way. This is not the same exercise of power that an authoritarian regime uses. As Waldron puts it, an authoritarian regime does not really “use law at all,” while a government that rules by law accepts the formal rigor of legality “even if it remains instrumental to the purposes of the law-maker.”

In other words, in order to maintain a veneer of legality, a regime dedicated to “rule by law” selectively applies existing law in order to achieve its political ends and intimidate any opposition, not to reach a “just” result. The distinction is important because of the ramifications it holds not only for its immediate targets and victims, but for the profound damage it does to the public’s perception of “the law” as a system to achieve equal justice. If allowed to continue, as Zhardori notes, this transformation has the potential to result in a despotic, oppressive society, one that is a far cry from what most Americans would expect or want.

In his essay Zhardori details how the “selective deployment” by Barr of actions which are nominally justified by existing law provide clear evidence of this fundamental distortion of the law. In an administration fairly devoid of any serious effort at the federal level in combating the COVID-19 pandemic, for example, Barr ordered the investigation that singled out “blue states” policies (New York, New Jersey, Pennsylvania and Michigan) regarding admission of COVID-19 patients to nursing homes, which, according to the DOJ’s accusatory Press Release, “may have resulted in the deaths of thousands of elderly nursing home residents.”

The nominal basis is a civil rights law that applies to group living facilities, but the department has evinced no interest in the rights of nursing home residents in Republican-run states, let alone inmates in jails and prisons throughout the country—where the same law applies, and where the spread of the virus has been a significant problem.

As applied to corporations, the DOJ under Barr has employed a similar “selective” approach, applying the “law” where it can to the administration’s adversaries, but sparing its allies.  Zhardori notes that while DOJ attorneys effectively quashed an almost certain indictment of WalMart over over-prescribing opioids, it dispatched a small army of DOJ lawyers to investigate Google, whom Trump and other administration officials (including Barr himself) have accused of “censoring” conservative opinions. The breadth of the Google “investigation” also stands in stark contrast to a longstanding investigation into administration-friendly Boeing:

According to The Wall Street Journal, “dozens” of Justice Department lawyers are working on this investigation, while a lean-staffed investigation into misconduct at Boeing over possible regulatory fraud in the development of the 737 MAX—implicated in hundreds of deaths resulting from crashes of the aircraft—is entering its third year with nothing yet to show.

The DOJ’s investigation into alleged “hoarding” of PPE supplies by certain U.S. companies is also, as Zhardori notes, notably devoid of any corresponding effort to investigate the numerous companies with connections to administration officials such as Jared Kushner which were permitted unfettered distribution rights of such PPE, even though the potential for corruption attendant to these relationships would appear blatantly obvious.

But it is the selective application of the law towards individuals whom the Trump administration has vilified, such as the unarmed and mostly peaceful Black Lives matter protests throughout the country, compared to the “hands-off” treatment afforded to armed militia members who actively threatened and even terrorized state capitals over “social distancing” measures imposed in Democratically-controlled states-- or armed pro-Trump protesters threatening peaceful protesters in places like Portland—that Zhardori shows best exemplifies this DOJ’s “weaponization” of the law.  The cringe-inducing, unheard-of-step of assigning DOJ attorneys to Donald Trump’s defense team in the defamation case brought by E. Jean Carroll, who has credibly accused Trump of rape, is also an example.

The corruption of the legal process as a bludgeon to be wielded against Trump’s political enemies sends the tacit signal to individuals and corporations that if they break the law, their support or opposition to the administration will be a defining factor in whether they are prosecuted. That is the very essence of corruption. But from a societal standpoint, in the hands of an ideological fanatic like Barr, the law becomes a threat rather than a protection. As Zhardori states, the system “exploits the public’s faith in institutionalism” even as it is employed to preserve a particular group’s vested interests—in this case, the interests of the Republican Party:

The threat that faces the country, then, is of an increasingly dominant rule by law that could include a more comprehensive deployment of the criminal justice system against perceived opponents of the administration. This selective, skewed use of the law is dangerous precisely because it has the veneer of legal legitimacy that covers a corruption deeply corrosive to the political order. We are seeing versions of this playing out in countries like Poland and Hungary.

In the past, the threat of a police state in this country, with justice selectively meted out in accordance with one’s political allegiance, has been consigned to the realm of speculative fiction. But there has been no other time in this country’s history where staggering social, economic and public health crises have all converged under the aegis of a regime so clearly untethered to—and unmoved by-- the “rule of law.”  With both Trump and the Department of Justice now fully aligned in a last ditch effort to preserve Trump’s political power, the decision Americans face on November 3, 2020 could not be more urgent—or its potential consequences more devastating.