How a dire shortage of poll workers imperils American democracy 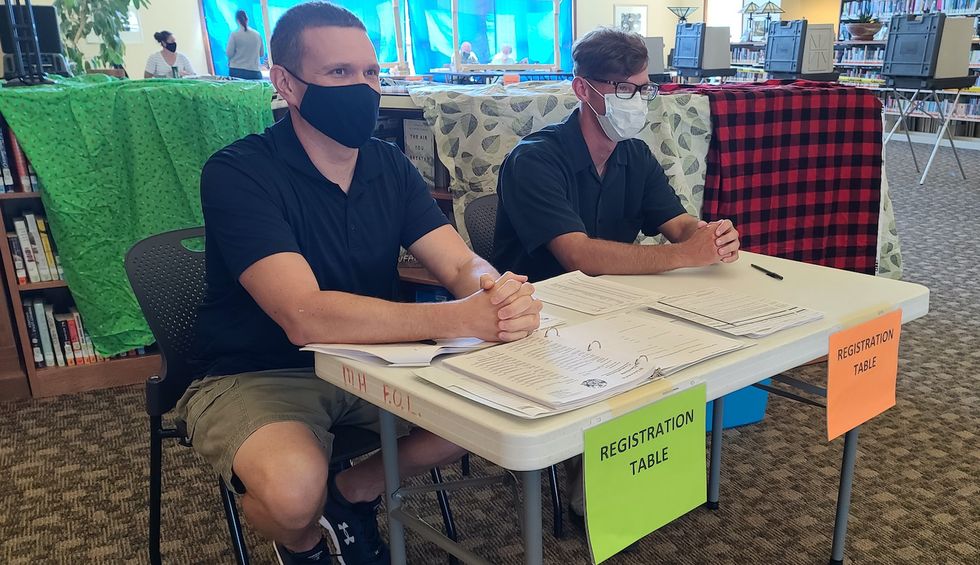 Kristi Serwin knows that Americans clamoring for social justice and decent treatment of working people can correct the nation’s course only with a fair, accessible election.

But she’s also observed the nation’s dire shortages of poll workers result in long lines and force the closure of polling places around the country, depressing the voter turnout needed to drive change.

Serwin refuses to let that plight befall her Ohio community, so she signed up to serve on a precinct election board, ensuring her neighbors have convenient access to the ballot box on November 3.

Without many more volunteers like her, American democracy will hang in the balance this Election Day.

The COVID-19 pandemic decimated the ranks of the nation’s poll workers at the very time Donald Trump’s spurious attacks on the legitimacy of mail-in votes make conveniently located, fully staffed voting places more important than ever.

If they’re confronted with long lines at the polls or forced out of their regular voting places, some Americans will just skip the election, no matter how high the stakes—and no matter how critical it is that their voices be heard—this year. And if America fails to conduct a fair, robust election, democracy dies.

Because this election will shape the nation for years to come, the labor movement urges members across the country to emulate Serwin’s example and perform a patriotic service that will safeguard America’s future.

Poll workers set up voting machines, check in voters, accept completed ballots and transport them to county seats for tabulation. During the primary and general elections, these unsung heroes log long hours so their fellow citizens can exercise an indispensable constitutional right.

“If I can make sure somebody’s line is shorter or give them a convenient place to vote, I’m sure as heck going to do it,” said Serwin, a control room operator at BP-Husky Toledo and member of United Steelworkers (USW) Local 346. “I felt it was something I needed to do.”

Most Americans want to have the option of voting by mail this year because they fear contracting COVID-19 at polling places.

However, Trump falsely claims that mail-in ballots invite voter fraud, and his Republican allies already filed a blizzard of lawsuits aimed at thwarting mail balloting. His shameful efforts to discount mail-in votes and silence Americans’ voices, driven solely by his fear of losing the election, make traditional polling places more essential than ever.

Yet COVID-19 exacerbated the shortages of poll workers that states and counties already face in every election. Many of the volunteers in their 60s and 70s who regularly fulfill this vital role declined to serve this year because they’re in poor health and fear contracting the coronavirus from voters. Other longtime poll workers bowed out because they worry not about their own health but bringing the virus home to fragile loved ones.

Without a wave of younger volunteers to take their places, election officials across the country will find it virtually impossible to keep all of their polling places open.

Ohio remains about 3,500 poll workers short of the bare minimum required to operate polls in all 88 counties. It really needs about 27,000 more volunteers to cover anticipated no-shows and illness-related call-offs on November 3 and to ensure polling places actually open—and remain open—all day.

Concerned about the rising tide of injustice in America and furious with Trump’s attacks on working people, including the rollback of safety regulations protecting refinery workers like her, Serwin recognizes that this is a pivotal election.

And knowing what happens when Americans fail to answer the call to serve as poll workers—the city of Milwaukee, for example, closed all but a handful of its 180 voting places during this past spring’s primary—she vowed to do her part to ensure the honest, inclusive election that Trump opposes.

Serwin, coordinator for Local 346’s Women of Steel program, agreed to serve in a neighboring precinct, Danbury, which needed poll workers so much that the county put her in charge of the election board there even though she’s volunteering for the first time.

She opted to take her floating Juneteenth holiday—provided under the USW’s contract with BP—to make sure she’s available all day.

“What better way to honor that date?” Serwin said, noting Juneteenth commemorates the end of slavery in the United States and also highlights the continuing fight for equality in America.

Poll workers’ service yields dividends for themselves and the public.

Janice Payne, a member of the Steelworkers Organization of Active Retirees (SOAR), began serving as a poll worker in Davenport, Iowa, when she retired from Alcoa about 11 years ago. County elections officials sought her help because of the pressing need for volunteers even then.

“If we don’t participate, we’re as good as saying we don’t care,” Payne explained. “I felt very honored that they would even ask me.”

Like Serwin, Payne took charge of a precinct election board in a nearby community, taking great pride in fairly and efficiently running a polling place where minority voters in prior years had been turned away because their names and addresses ostensibly failed to match the information in election records.

Not only did Payne go to great lengths to help minority residents cast ballots but she also used audible readers—designed for people with vision impairments—to help citizens with reading difficulties vote as well.

Under her leadership of the precinct, she said, turnout increased from fewer than 100 voters per election to more than 300.

But this year, she reluctantly stepped aside. She helps care for a prematurely born granddaughter with many health problems and fears bringing COVID-19, or another ailment, into the house.

“I don’t want to be the one to cause her to become sick,” she said, noting it’s past time for the next generation to step forward and serve as she has.

One day, Serwin wants to be able to tell her own grandchildren that she did her part to safeguard democracy and save an election the president himself tried to sabotage.

She hopes many other Americans also will volunteer to serve as poll workers in coming weeks, embracing a civic duty at a time their country urgently needs their help.

“I feel we all need to step up,” Serwin said. “We have to make sure voting is accessible to everybody.”