'Herd developed': Trump's death cult would rather get COVID-19 than admit they were wrong 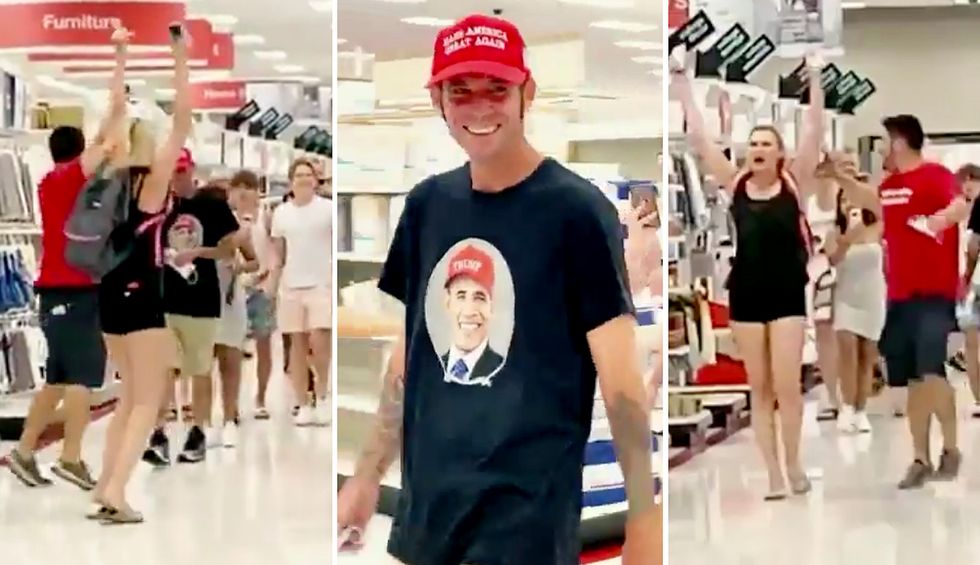 Donald Trump was doing spectacularly bad science again, this time during a town hall in Philadelphia hosted by ABC's George Stephanopoulos on Tuesday night. The event went about as well for the president as anyone who has been awake during the past four years could have predicted, which raises the important question: Wasn't his new campaign manager supposed to be competent?

When asked about an audio clip captured by journalist Bob Woodward in which Trump talks about the coronavirus pandemic and how much he "wanted to always play it down," Trump slid right into his don't-believe-your-lying-ears mode, claiming that he, in fact, "up-played it." Whatever that means. Then the "very stable genius" currently squatting in the Oval Office rolled out his brilliant plan to lick the coronavirus problem (as transcribed by the invaluable Aaron Rupar of Vox):

TRUMP: It is going away.

STEPHANOPOULOS: Without a vaccine?

TRUMP: Sure. Over a period of time.

STEPHANOPOULOS: And many deaths.

TRUMP: It's gonna be herd developed.

Trump's English comprehension is garbled by decades of being unable to listen to anyone speaking about any topic that doesn't directly concern his greatness or his personal finances. But he appeared to be talking about the concept of "herd immunity," which is generally understood to require 70 to 90% of the population to be immune to a given infectious agent. This "let everyone get it" plan has been a favorite of Trump's from the beginning of the pandemic. Recently, he has hired a borderline quack named Dr. Scott Atlas — a radiologist with no expertise in virology or epidemiology — to keep telling him it's a good idea. But even Atlas knows this is a crackpot plan, and has so far refused to admit to reporters that he's the source of Trump's incoherent muttering about "herd impunity" or "herd magnanimity" or "herd it on the grapevine." (To be clear: Kidding! He hasn't said any of those things. At least not yet.)

Right now, somewhere around 2% of Americans have tested positive for the coronavirus — which is still a whopping 6.6 million people, more than any other nation on Earth — and of that group, just over 196,000 have died as of Wednesday afternoon. I leave it to readers — who, unlike Trump, didn't pay someone to take their SATs for them — to figure out how many more people are likely to die if we go with Trump's brilliant plan of infecting perhaps 35 times as many people with the virus as have now tested positive.

(Or, skip the algebra and read this article from the Washington Post, which estimates that Trump's "good brain" plan would kill nearly 3 million people.)

Here I thought that Trump had crammed thousands of his followers, without masks, into an indoor rally in Henderson, Nevada, just because he's a terminal narcissist who prioritizes his insatiable need for applause over the lives of the very swing-state voters he would need to win the election. But hey, it might also be that he's using the bodies of his own supporters — who tend, on average, to be older and likelier to die of COVID-19 — for his grand experiment in "herd development."

Move over, Burning Man: It's time for a new desert festival! Donald Trump's Coronafest 2020: The drugs aren't as good, and you're way likelier to end up dead.

The wild thing is how many people turned up for the dubious pleasures of risking their lives to hear Dr. Bleach-Injector's whiny, singsong cadence for more than an hour. Thousands of people showed up at the Henderson rally, putting it all on the line to show the world that they're willing to get sick or even die rather than admit it was a bad idea to elect a racist reality-TV host with the moral compass of a serial killer to the highest office in the land.

In the first year of Trump's presidency, I wrote a piece warning about the powers of rationalization, and suggesting how far Trump supporters would likely go rather than admit they made a mistake in voting for the man in 2016.

"[T]he answer to the question of when Trump voters will come around is somewhere between 'a long, long time from now' and more likely 'never,'" I wrote in June 2017.

I quote myself only to say that, holy yikes, did I understate the case. No matter how confident I was that Trump supporters would contort themselves into ridiculous pretzels or sign onto outrageous beliefs to justify their 2016 vote, even I had no idea how wacky things could get. Here we are, three years and change later, and this is the lengths Trump voters will go to avoid having to say, "Oops!"

Or check out this rally in the town of St. George, Utah, which happened a few weeks ago but has now gone viral, due to the I-can't-believe-this-isn't-satire aspect of it all. That report doesn't come from a progressive media outlet of any kind, just the local news station. It features a bunch of angry white people comparing having to wear a face mask to George Floyd being killed by police in Minneapolis, or claiming that "most child molesters love" masks.

No doubt it's tempting to dismiss these examples as nut-picking, no different than when right-wingers grab the occasional anarchist-flavored vandal at a Black Lives Matter protest and use him to demonize the whole movement. But the difference is these loons don't actually sound much different than their beloved president.

Trump has also suggested that people only wear masks to spite him. He was clearly coached by his campaign staff to sound vaguely pro-mask during the Tuesday town hall, his true feelings came out when he kept repeating variations of "a lot of people think the masks are not good." (When Trump says "some people" or "a lot of people" are saying something, he is just stating his own opinion and, like the incorrigible coward he is, refusing to own it.) And like that "child molester" lady, who is obviously a QAnon follower, Trump loves pushing Q-friendly conspiracy theories, even retweeting  a QAnon adherent who recently accused former Vice President Joe Biden of being a pedophile.

Despite all this, Trump's approval rating sits right around 42 to 44%, and is apparently immovable. The phrase "in for a penny, in for a pound" has never been more relevant. Apparently, anything is better than admitting that the liberals were right that voting for Trump was a bad idea — even getting COVID-19 is preferable to that. That's why the conspiracy theories must get more baroque all the time, because trying to tell a story in which Trump voters are the good guys is harder than trying to explain to the cops why you have a freezer full of human body parts.

Hell, maybe it was a smart idea for the campaign to throw Trump on TV, thereby guaranteeing that liberals would mock him and the fools who vote for him without mercy. As the past four years have demonstrated, it just makes Trump's supporters more defensive, and more determined than ever to stick it to the libs one more time. Because heaven forbid that Trump's 2016 voters should demonstrate a conscience by acting like real good guys would: Sucking it up, admitting they were wrong and making better choices this November.