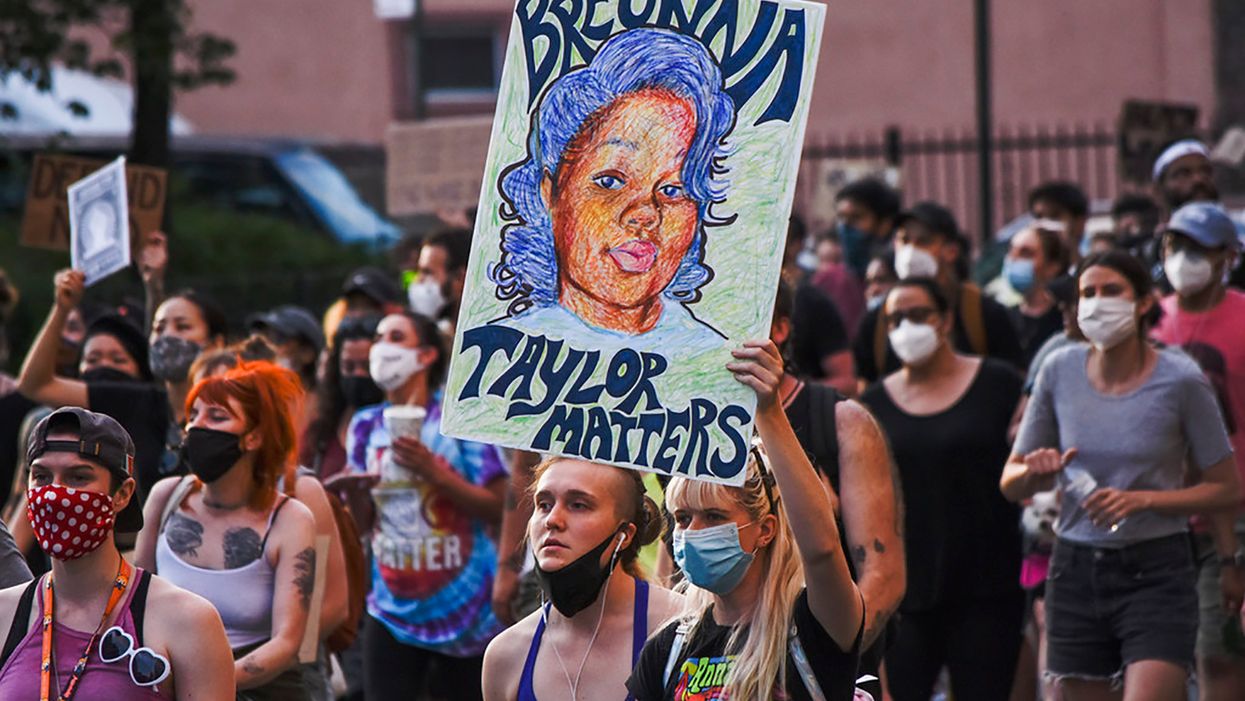 As has been obvious from the beginning, the legal story of the police murder of Breonna Taylor has been badly misreported. In almost every article or news story, journalists have used phrases like "the grand jury failed to charge" or "the grand jury did not return"—phrases that make it seem that the decision not to charge any of the three officers involved for Taylor's death was a exactly that, a decision.

Those reports might seem to be well founded, based on the initial statements of Kentucky Attorney General Daniel Cameron:

Grand jury proceedings are secret. And so I'm not going to get into the specifics of details about that proceeding. What I will say is that we presented all of the information and they ultimately made a determination about whether to charge. In this instance, they decided to indict Detective Hankinson.

But now, one of the members of that grand jury is asking a judge to set aside the usual rules that protect grand jury proceedings and release the transcripts of the proceedings. And there are very good reasons to think that what Cameron called "all the information" did not include the option for the jurors to return any charges related to Breonna Taylor's death. The judge has already agreed with the juror, and the Associated Press is reporting that Cameron will comply with the order to release the transcript.

As The Louisville Courier-Journal reports, an attorney for that juror is saying that, "The full story and absolute truth of how this matter was handled from beginning to end is now an issue of great public interest and has become a large part of the discussion of public trust throughout the country." That motion to the judge also accuses Cameron of using the grand jury "as a shield to deflect accountability and responsibility for those decisions."

That full truth is likely to be related to something Cameron said in his initial statement following Judge Annie O'Connell's announcement of the surprisingly brief grand jury results.

"While there are six possible homicide charges under Kentucky law, these charges are not applicable to the facts before us because our investigation show and the grand jury agreed that Mattingly and Cosgrove were justified in the return of deadly fire after having been fired upon by Kenneth Walker."

Though Cameron slips an "and the grand jury agreed" into the middle of this, the key statement here is his declaration that homicide charges "are not applicable." Cameron repeated that claim a few sentences later.

"Let me state that again. According to Kentucky law, the use of force by Mattingly and Cosgrave was justified to protect themselves. This justification bars us from pursuing criminal charges in Ms. Breonna Taylor's death."

The grand jury doesn't determine charges. It doesn't determine the evidence it gets to hear, which witnesses appear, or what questions they are asked. It seems exceedingly clear that, at best, Cameron worked the grand jury to get them to agree that the indiscriminate gunfire from the three plainclothes officers arriving in the middle of the night was "justified." But whether or not that question was ever put to the jury, it also seems clear that Cameron never offered them the chance to return any charge against Brett Hankison, Jonathan Mattingly, or Myles Cosgrove as it relates to Taylor. As Cameron says straight out, he determined that he was "barred from pursuing criminal charges" in Taylor's death. That's not a grand jury decision. That's a Daniel Cameron decision.

There are also very good reasons to doubt the whole justification that Cameron, and Louisville police, have used from the very first day of this tragedy—the claim that Breonna Taylor's boyfriend, Kenneth Walker, fired first, and shot one of the officers on the scene. A ballistics report by the Kentucky State Police does not support those claims. It was unable to identify Walker's gun as the source of a bullet that struck Mattingly. The Louisville police had previously claimed that the bullet had to come from Walker because none of the officers carried a 9mm handgun, but one of Walker's attorneys noted that police department records showed that Hankinson—the only officer charged for firing shots that went into another apartment—was issued a 9mm weapon.