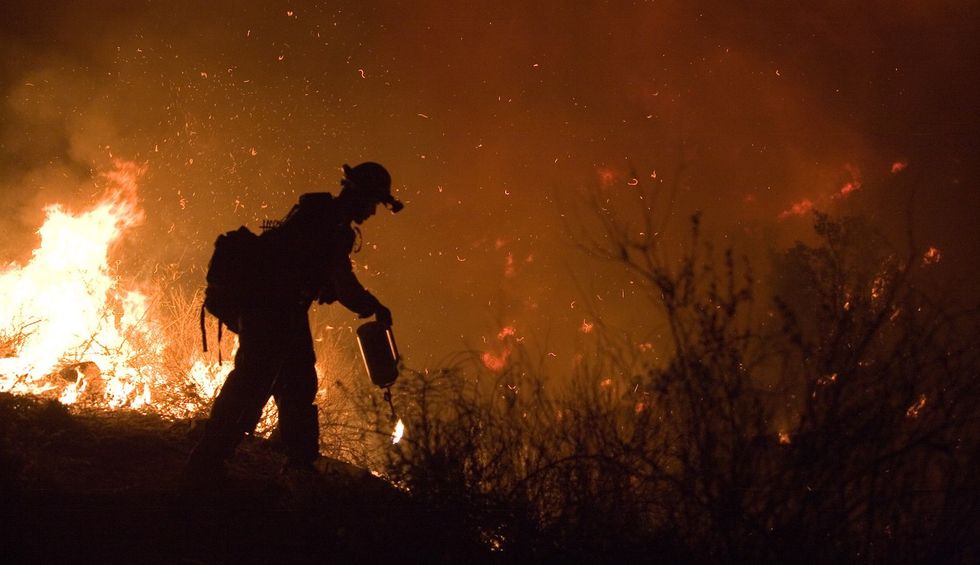 Even as devastating wildfires across the U.S. West Coast and rapidly shrinking Arctic sea ice offer alarming evidence of the reality and immediacy of the climate crisis, the planetary emergency was apparently deemed not worthy of inclusion on the list of official topics for next Tuesday's presidential debate between President Donald Trump and Democratic nominee Joe Biden.

Unveiled Tuesday by the Commission on Presidential Debates, the featured topics of the 90-minute event—moderated by Chris Wallace of Fox News—are expected to be the coronavirus pandemic, the economy, the Supreme Court, the two candidates' records, election integrity, and "race and violence in our cities."

While the topics are subject to change, the initial exclusion of the greatest crisis facing humanity sparked backlash from environmentalists, who characterized the ongoing neglect of the climate emergency as yet another dereliction of duty by the corporate media.

"At a time when wildfires are burning down an entire coast, it's absolutely unconscionable for the media to dismiss climate change as a topic in the first presidential debate," Varshini Prakash, executive director of the youth-led Sunrise Movement, said in a statement late Tuesday. "Poll after poll shows the climate crisis looms large on the minds of voters across the country; an NPR survey released yesterday showed it was the single most important issue among Democrats. Young Republican voters also list climate as their top concern."

Prakash said her organization is "committed to mobilizing our movement to protest at the presidential debates until Chris Wallace and other mainstream reporters address climate head on."

"The American people are crying out for a real solution to the crises we find ourselves," said Prakash continued. "We need to open up conversations around how we can mobilize our government to fight the climate crisis while also creating millions of good jobs in the process of recovering from an economic collapse and global pandemic. It's an abdication of the media's role to keep people informed for climate to be completely erased from the docket."

The West coast is literally on fire yet the climate crisis won't even be addressed in the first presidential debate… https://t.co/ym2AZv2Y78
— Sunrise Movement 🌅 (@Sunrise Movement 🌅)1600804267.0

Throughout his first term, Trump repeatedly dismissed or downplayed the climate emergency and contributed to it by gutting basic environmental protections and rushing to expand domestic fossil fuel production at a time when rapid planetary warming demands an urgent transition away from polluting energy sources.

Biden, for his part, put forth a $2 trillion green energy plan in July that climate groups said is a good first step but ultimately insufficient to deliver the needed transformational change.

Earlier this month, as Common Dreams reported, Biden slammed the president's ongoing climate denial in the face of the catastrophic wildfires in California, Oregon, and Washington state and said that "in the years ahead, there will be no challenge more consequential to our future than meeting and defeating the onrushing climate crisis."

"The science is clear, and deadly signs like these are unmistakable—climate change poses an imminent, existential threat to our way of life," Biden said in a statement. "President Trump can try to deny that reality, but the facts are undeniable. We absolutely must act now to avoid a future defined by an unending barrage of tragedies like the one American families are enduring across the West today."

Despite the marked contrasts between the two candidates on climate policy, it is unclear whether their differences will receive any attention or discussion at next Tuesday's debate, which will come less than 40 days ahead of the November 3 election.

Evan Weber, co-founder and political director of the Sunrise Movement, tweeted Tuesday that if Wallace fails to mention the climate emergency in his questions, Biden must bring up the topic on his own.