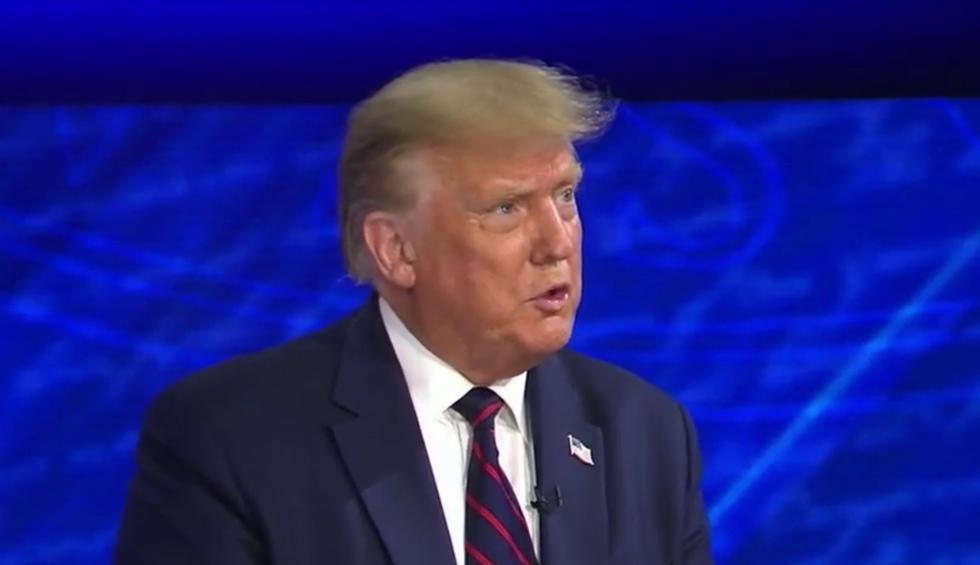 The rally, held in spite of the COVID-19 pandemic, featured a large crowd closely packed together.

Here's some of what people were saying about Trump's speech, which lasted approximately 95 minutes:

The beginning of the line for @realDonaldTrump’s rally tomorrow evening(8pmCDT). These patriots camped out for TWO… https://t.co/VpDrTkZCVt
— RSBN 🇺🇸 (@RSBN 🇺🇸)1600312939.0

While @realDonaldTrump holds a rally in Mosinee, (most of) the @parksandrec cast is raising money for @WisDems (and… https://t.co/SEqPGuFrts
— Jessie Opoien (@Jessie Opoien)1600392922.0

"He did a lousy job. He was a lousy president," says @realDonaldTrump of @BarackObama, complaining his predecessor… https://t.co/ujCAfx10zM
— Steve Herman (@Steve Herman)1600393284.0

Trump: We won so many lawsuits on the wall and we have the military money, I could build like ten walls with all th… https://t.co/mOqyfjdfWV
— Acyn Torabi (@Acyn Torabi)1600393983.0

Tonight Trump now claims “the radical left hates” Joe Biden So they HATE Biden but he’s also their puppet and also… https://t.co/ozhMZbGcEH
— Will Steakin (@Will Steakin)1600394819.0

@realDonaldTrump He then opens a remarkably candid window on his own psychology: that he prefers unsuccessful peopl… https://t.co/1oVZnAHZtF
— Sebastian Smith (@Sebastian Smith)1600395023.0

Trump rants about how he lost all of his friends & no longer goes to dinner with people, where he'd have discussion… https://t.co/pPMI4nR2kL
— Aaron Rupar (@Aaron Rupar)1600396309.0

Trump's side tangent to crowd that's standing in 40-degree weather in Mosinee that he asked for a coat when he arri… https://t.co/qlyXl1GSsp
— Natasha Korecki (@Natasha Korecki)1600396798.0