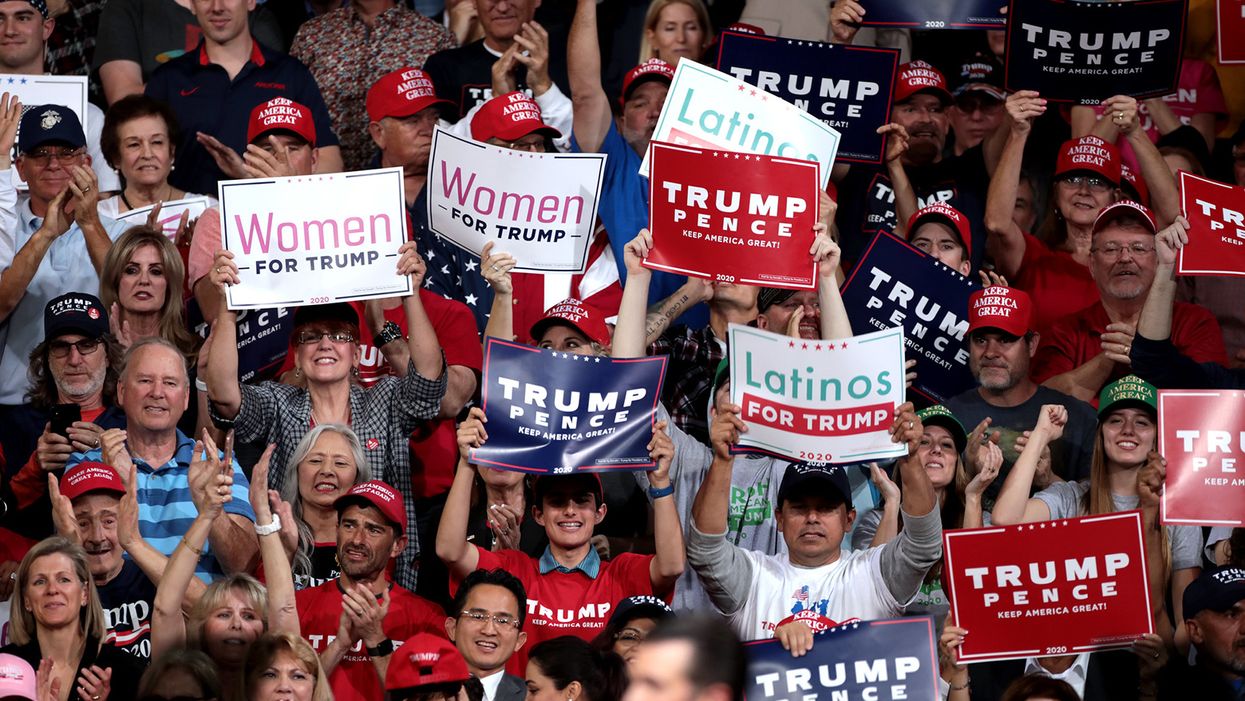 Among the stream of authoritarian remarks President Donald Trump let loose during his disastrous performance at Tuesday night's presidential debate, one of the most alarming to voting rights advocates came at the tail-end of the 90-minute event, when the incumbent openly encouraged his supporters to "go into the polls and watch very carefully."

Though poll watching is authorized in states across the U.S., the activity is restricted by specific rules and guidelines aimed at preventing a candidate's backers from showing up at polling places and intimidating voters attempting to cast their ballots. The president's comments Tuesday night, observers warned, went well beyond a call for legally sanctioned and qualified election observers.

Asked by debate moderator Chris Wallace whether he would pledge to "not declare victory until the election has been independently certified," Trump ignored the question and repeated a lie he first spread on social media ahead of Tuesday night's event.

"As you know, today there was a big problem," the president said. "In Philadelphia, they went in to watch. They're called poll watchers, a very safe, very nice thing. They were thrown out. They weren't allowed to watch. You know why? Because bad things happen in Philadelphia. Bad things. And I am urging my people—I hope it's going to be a fair election."

But as the Philadelphia Inquirer pointed out, "there were several reasons why elections staff did not allow members of the public to arbitrarily enter their offices."

"The Trump campaign has no poll watchers approved to work in Philadelphia at the moment," the Inquirer noted. "There are no actual polling places open in the city right now. And elections officials are following coronavirus safety regulations, such as those limiting the number of people indoors."

In a joint statement following the debate, during which the president also repeated a number of falsehoods about mail-in voting, Eldridge and Indivisible co-executive director Leah Greenberg said that "the confusion and doubt that Donald Trump tried to sow about the election tonight is the behavior of a desperate man and a losing candidate."

"We are building a broad network of people who are working to make sure every vote is counted and preparing to mobilize if Trump attempts to undermine the valid results. The voters will have the last word," said Eldridge and Greenberg. "While we work to resoundingly defeat Donald Trump in this election, preparing to also protect the results of this election isn't just reasonable, it's necessary."

The Inquirer reported that on Tuesday afternoon, as early voting began in Pennsylvania, "a woman approached the supervisor at the entrance of the satellite office at Overbrook Elementary School" claiming that "she was there to monitor 'the integrity of the election'" and asking to be allowed inside the building.

"The woman did not present any sort of certificate of being an official poll watcher, but calmly stated that she had a right to be inside," according to the outlet. "The woman told the Inquirer she was 'hired by the Trump campaign to oversee the integrity of the election.' She said she was paid to monitor the West Philadelphia site. She would not provide her name or any further information, and she left the area shortly afterward."

In a video posted online last week, Donald Trump Jr., the president's eldest son, called on Trump supporters to "enlist" in the campaign's "election security operation" and falsely claimed that the president's opponents "plan to add millions of fraudulent ballots that can cancel your vote and overturn the election."

On the second day of early voting in Virginia on September 19, Trump supporters heeded the campaign's repeated calls to show up at polling places en masse, offering a potential preview of the chaos the president is attempting to provoke across the country. As the New York Times reported, a crowd of Trump supporters gathered near a polling location in Fairfax and formed "a line that voters had to walk around outside the site."

"County election officials eventually were forced to open up a larger portion of the Fairfax County Government Center to allow voters to wait inside away from the Trump enthusiasts," the Times noted.

Bryan Graham, the chairman of the Fairfax County Democrats, tweeted at the time that "Republicans are straight-up attempting to intimidate voters at the Government Center. Circling the parking lots with their Trump flags and horns blaring."