Daniel Ellsberg warns US press freedom is under attack 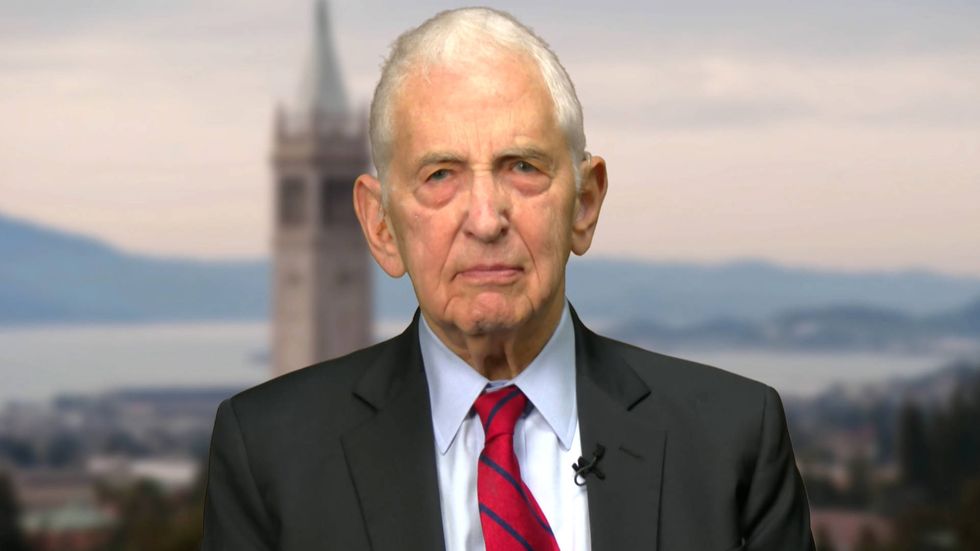 Legendary Pentagon Papers whistleblower Daniel Ellsberg says Julian Assange’s extradition hearing in London could have far-reaching consequences for press freedoms. The WikiLeaks founder faces an ever-evolving array of espionage and hacking charges related to the release of diplomatic cables that revealed war crimes committed by U.S. forces in Iraq and Afghanistan. Assange faces almost certain conviction, if extradited, and 175 years in prison. “The American press has remained in kind of a state of denial for 40 years, really, since my case, that the Espionage Act has wording in it that could be aimed directly at them,” says Ellsberg, who testified in Assange’s defense at his extradition trial via video stream from the United States. “Now the American press is staring right down the barrel at the use of the Espionage Act against American journalists and publishers for doing journalism.”

AMY GOODMAN: This is Democracy Now! I’m Amy Goodman, with Nermeen Shaikh, as we turn now to the press freedom case unfolding in London, where Julian Assange, founder and editor-in-chief of the WikiLeaks, is fighting extradition to the United States over an ever-evolving array of espionage and hacking charges. Assange faces almost certain conviction, if extradited here, and 175 years in prison. U.S. prosecutors allege he conspired with whistleblower Chelsea Manning, who had been private in the U.S. Army, to illegally download hundreds of thousands of war logs from Iraq and Afghanistan, along with a huge trove of classified cables from the U.S. State Department.

Experts have lined up to defend Assange, including the legendary Pentagon Papers whistleblower Dan Ellsberg, who testified Wednesday at the extradition via video stream from his home in California, in Berkeley. In 1971, Ellsberg was a high-level Pentagon analyst when he leaked a top-secret report on U.S. involvement in Vietnam that became known as the Pentagon Papers, which documented how officials had lied to the public about the war. Like Assange, Ellsberg provided the leaked documents to The New York Times. Also like Assange, Ellsberg was charged under the Espionage Act and could have spent the rest of his life behind bars, though a judge threw out his case when it was revealed that President Nixon had ordered criminal break-ins seeking damaging information on him. Dan Ellsberg joins us now from Berkeley.

Welcome back to Democracy Now!, Dan. We don’t have that much time, but talk about why you testified at the extradition hearing, asking that Julian Assange not be sent to the United States — though, we should say, he has basically been in captivity for almost eight years now, having gone into the Ecuadoran Embassy, where he got political refuge, but was there for years, before a new right-wing government in Ecuador revoked that political asylum status and the British authorities came in and ousted him and brought him to the Belmarsh prison, the high-security prison in Britain.

DANIEL ELLSBERG: Yes, I’d like to focus, Amy, on the larger implications of this case, since we only have a minute or two. Really, the American press has remained in kind of a state of denial for 40 years, really, since my case, that the Espionage Act has wording in it that could be aimed directly at them, at the journalists and publishers, although, until this case, it hasn’t done so. So, now the American press is staring right down the barrel at the use of the Espionage Act against American journalists and publishers for doing journalism, for doing what they do best, at their best, every day, of getting information that the government doesn’t want known to the public because of their wrongdoing, their lies, their crimes, whatever — there’s a lot of those. And that’s what is mainly the secrecy system is intended to protect, indefinitely.

Now, it’s not only American journalists here, although the American First Amendment, the core of our form of government, I would say, is at stake at this right now and is being attacked. Actually, if Julian is extradited, as I say, as you said, it will lead to prosecution here, and probably conviction, and he will not be — he will be the first journalist and publisher, but not the last. New York Times probably won’t be the second, either; it might be the third or the fourth — and you, Amy, as well. So, everybody has a stake in this. Meanwhile, if Julian is extradited to the United States to face these charges for doing the journalism that he has, the charges that are made against him, no journalist in the world is safe from life imprisonment in the United States of America. So the stakes here are enormous. And for freedom of the press anywhere — ours is far from perfect, other places have less, a few have more — but the possibility of freedom of the press, and thus of democracy, is at stake all over the world in this. That sounds almost certainly like hyperbole, and it isn’t.

The prosecution proved yesterday that they’re basing a lot of the case, first of all, on — not so much with me, but with other witnesses — on the fact that Chelsea Manning was encouraged by Julian to give this information, and he actually asked for documents. I can’t count the number of times I’ve been asked for documents, as was quite proper for journalists. So that conspiracy is something that every source goes through with every journalist who uses sources.

On the question of what — the damage he has done, the government is seeking to focus on the fact that names, unredacted, were subject, in their minds — and quite understandably, plausibly — to danger in the countries where they were by being published. As I pointed out to the prosecutor, the way to stop that danger from occurring was to stop the publication of those names. And those were not names that either the media or WikiLeaks or Julian Assange wanted to put out. On the contrary, the media and the government was well aware — the media was participating — that they were making enormous efforts to redact from this mass of documents the names of anyone who might be put in a feeling of anxiety or danger or might be in real danger. And, second, they called on the government to supply those names that they could take out. It was in the government’s capability to prevent those people, not of all of whom they could get in touch with, from even being revealed at all, even being in a state of anxiety, and they chose not to do it. They have total responsibility for the anxiety, the fleeing of some of them from their countries — total responsibility, I would say, the government, since they could have prevented that and they chose not to. I can only infer that they preferred to reserve charges, these charges against Julian Assange, eventually, rather than to protect those people from the possible danger that they were put in.

Finally, it’s utmost cynical — as I was listening just now to the reports you were making. We’re talking of people who are refugees from a state of war that the United States initiated, first with attack on Afghanistan, but in particular with its aggression against Iraq. And I did mention this the other day to the prosecutor, that it’s, I can only say, cynical — I could use other words — to say that the government, our government, is worried about 100 or 200 people being made anxious and concerned, and some of them asking to leave the country with U.S. help, to be concerned about those people, when this government has led to the flight of 37 million refugees from American-initiated wars, the plight of some of whom you have just described. It’s a mockery. And if this trial is successful, if the extradition is successful, already that will have an intimidating effect on journalists around the world and be a direct attack on the First Amendment of the United States.

AMY GOODMAN: Daniel Ellsberg, we want to thank you for being with us, again, one of the world’s most famous whistleblowers. He testified at Julian Assange’s extradition hearing on Wednesday. And just to be clear, Julian Assange, from being under house arrest in Britain to holing up in the Ecuadoran Embassy for over seven years to being at Belmarsh, the high-security prison, for a year and a half, has been actually in captivity for more than a decade. That does it for our show. To see our interview with one of his lawyers, Jennifer Robinson, go to democracynow.org.