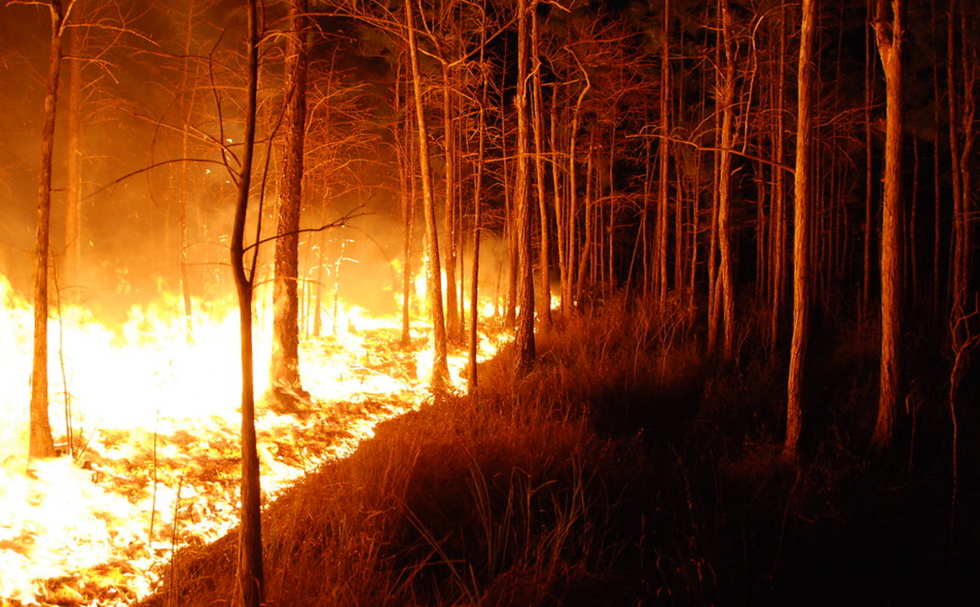 Smoke plumes rising tens of thousands of feet into the air over California could be seen from outer-space overnight and into Sunday as massive wildfires that touched off this weekend amid a statewide heatwave triggered dramatic rescue efforts for hundreds of people trapped in a U.S. national forest and fresh warnings of a "climate emergency" unfolding in real time.

The fast-moving "Creek Fire" in the Sierra National Forest—which has burned at least 36,000 acres and reported as 0% contained as of Sunday—triggered a military-assisted rescue effort of more than 200 people camped at a popular swimming reservoir in the park. The fire was so ferocious, according to the National Weather Service (NWS) Oakland Center Weather Service Unit on Saturday, that the tops of smoke plumes soared to 50,000 feet or more.

Meanwhile, with temperature records "shattered" in areas across the state on Saturday, a number of other wildfires erupted elsewhere. After Tom Dang, a science and operations offices out of the NWS's Tuscon office, shared the following satellite imagery of the multiple fires, meteorologist and journalist Eric Holtaus said: "it cannot be overstated how terrifying this satellite image is."

For climate experts like Holthaus, extreme wildfires like the Creek Fire, matched with the record-setting heat in California, cannot be—and should not be—decoupled from the underlying planetary crisis caused by fossil fuel emissions and other human activity.

The biggest new fire burning in California right now is so powerful it sent smoke 10 miles straight up into the str… https://t.co/ZEg0lEsYQI
— Eric Holthaus (@Eric Holthaus) 1599405171

A Sunday morning alert from the NWS warned: "A dangerous heat wave is underway across much of the Western U.S. this holiday weekend and critical fire weather conditions are forecast through next Tuesday for portions of the West." The NWS said that as "excessive heat" continues in California and across the western region of the U.S., there is potential for new daily temperature records being set—and those soaring temperatures, experts warn, arrive amid already dire fire conditions.

The heat in California is intense--records aren't just being broken, they're being crushed https://t.co/zSCGG0FQrJ
— Bill McKibben (@Bill McKibben) 1599344524

According to the Los Angeles Times:

The forecast prompted Gov. Gavin Newsom to issue an emergency proclamation aimed at shoring up California's energy capacity and staving off the kind of power outages and rolling blackouts that left tens of thousands of residents in the dark during the last big heat wave.

The California Independent System Operator, which runs the power grid for most of the state, has issued a statewide flex alert—calling for residents to voluntarily cut back their electricity consumption from 3 to 9 p.m. Saturday through Monday.

"This is what climate change looks like," lamented Dana Brown, a research professor of history and professor emerita at the University of California, Santa Cruz. in the Guardian on Thursday in a column documenting the recent and widespread destruction caused by this year's fire season in California.

Interviewed by CapRadio this week about the climate connection and what to do about the intensifying wildfire seasons in California and elsewhere, UC Berkeley forest ecologist and climate change scientist Patrick Gonzalez—who says that "outdated policies" combined with human-caused global heating accounts for a 900% increase in areas burned by wildfires since the mid-1980s—said ending the fossil fuel economy should be the chief priority for anyone wanting to address the root cause of the issue.

"Fundamentally, the main solution to a lot of the fire problems that we have [is] taking action on climate change," Gonzalez said of the fires. "To be carbon-free is the ultimate end goal, and the sooner we reach that, the better it will be for nature and for people."