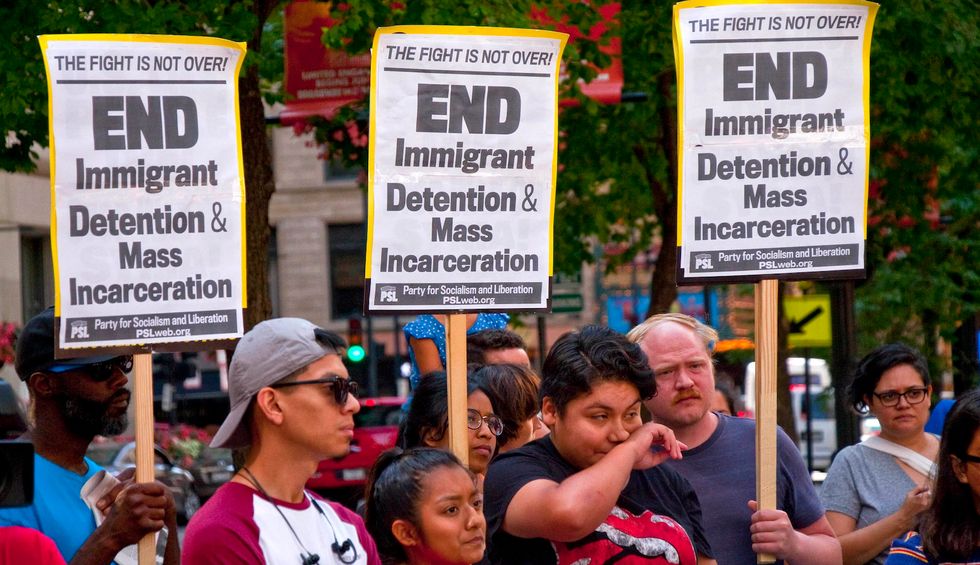 Human rights advocates sounded alarms Monday following a whistleblower complaint that alleges an alarming number of hysterectomies were performed on detainees at an Immigration and Customs Enforcement facility in Georgia. The complaint also alleges "jarring medical neglect" throughout the facility, particularly in relation to Covid-19 safety protocols and procedures.

The whistleblower, Dawn Wooten, a longtime licensed practical nurse who has been working at the facility for three years, described unsanitary practices and little if any regard for containing or controlling the spread of Covid-19 among detainees and staff, as well as an alarming number of hysterectomies performed on detainees, in the complaint.

"For years, advocates in Georgia have raised red flags about the human rights violations occurring inside the Irwin County Detention Center," Priyanka Bhatt, staff attorney for Project South, the group that filed the complaint on behalf of Wooten in conjunction with the Government Accountability Project, said in a statement.

"Ms. Wooten's whistleblowing disclosures confirm what detained immigrants have been reporting for years: gross disregard for health and safety standards, lack of medical care, and unsanitary living conditions at Irwin," Bhatt continued. "We call on DHS [the Department of Homeland Security] to conduct an investigation into the Irwin County Detention Center in order to protect the health and safety of the detained immigrants and the workers there."

In addition to condemning the alleged conditions and disregard for Covid-19 prevention in the facility, civil and human rights organizations, journalists, and lawmakers pointed to the dark history of forced sterilization of minority populations in the United States.

"Everybody's uterus cannot be that bad," Wooten told Project South, as reported in the complaint. "We've questioned among ourselves, like, goodness, he's taking everybody's stuff out... That's his specialty, he's the uterus collector. I know that's ugly... Is he collecting these things or something?... Everybody he sees, he's taking all their uteruses out or he’s taken their tubes out."

According to the report, which cites detainees who came forward to Project South but remain unnamed:

A detained immigrant told Project South that she talked to five different women detained at ICDC between October and December 2019 who had a hysterectomy done. When she talked to them about the surgery, the women 'reacted confused when explaining why they had one done.' The woman told Project South that it was as though the women were 'trying to tell themselves it's going to be OK.' She further said: 'When I met all these women who had had surgeries, I thought this was like an experimental concentration camp. It was like they're experimenting with our bodies.'

"Forced sterilization is a deliberate, systemic, and targeted devaluation of Black, Brown, and Indigenous women, people, and families," IF/When/How, a reproductive justice organization, tweeted in a thread about the complaint Monday. "It is a part of America's history as a country, and it is clearly very much a part of our present."

Journalist Thom Hartmann suggested known racist Stephen Miller, a senior policy advisor to President Donald Trump, might have been involved, tweeting, "We used to call this eugenics in America—the purposeful, medical elimination of the ability of 'undesirable people' to reproduce. We did it to Blacks and Native Americans by the tens of thousands in the 1920s. Stephen Miller's fingerprints must be all over this."

The bulk of Monday's complaint focused on violations related to Covid-19 at the detention facility. According to a statement from the Government Accountability Project:

Following reporting on the complaint, the ACLU Tuesday renewed its call to break up DHS, of which ICE is a part, and progressive lawmakers continued to call for the abolition of ICE entirely.

This detention center, Irwin, is run by for-profit provider LaSalle. We investigated the money-making machinery of… https://t.co/WUxgXFPxFk
— ACLU (@ACLU) 1600118875

"ICE is an agency rotten to its core," Rep. Rashida Tlaib (D-Mich.) tweeted Monday. "That they're now literally removing immigrant women's wombs is sickening and further shows why #AbolishICE is a human rights, reproductive justice, and public health imperative. We can't be silent. We must stop this."