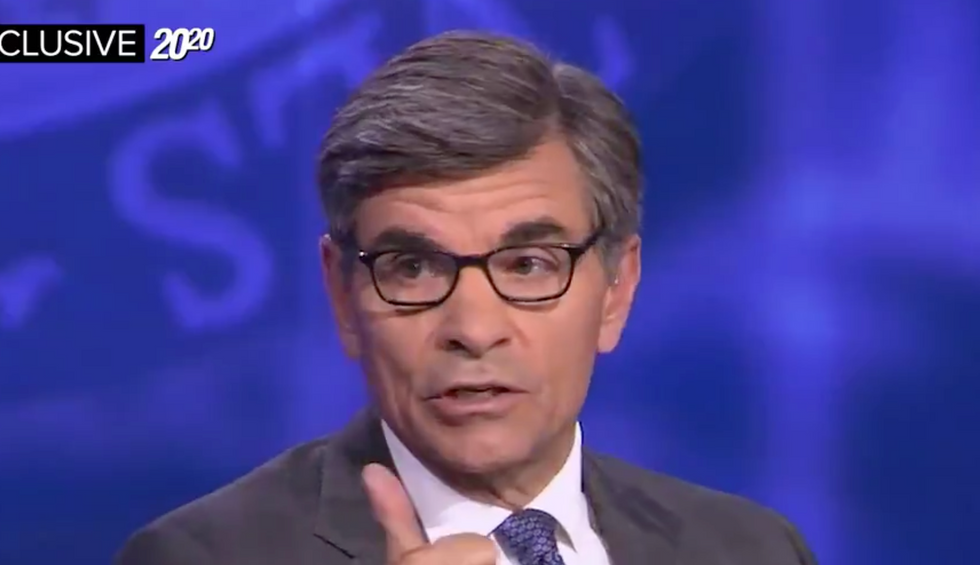 ABC News anchor George Stephanopoulos cut off President Donald Trump on Tuesday during an egregious string of lies about health care at an event with voters.

Trump had been responding to a question about his health care policy. Since he knows almost nothing about health care policy and cares even less, he launched into a meaningless and obfuscatory rant about how his administration will supposedly protect pre-existing conditions.

At that point, Stephanopoulos felt compelled to cut in and correct Trump's lies.

"I have to stop you there—" he began.

"I just have to stop you there just on a couple points," Stephanopoulos said. "Number one, Joe Biden has run against Medicare for All in the primaries. But much more importantly, Obamacare guaranteed people with pre-existing conditions could buy insurance. Guaranteed they could buy it at the same price as everyone else. Guaranteed a package of essential benefits. Guaranteed that insurance companies couldn't put a lifetime limit on those benefits."

He continued: "You fought to appeal Obamacare. You're arguing in the Supreme Court right now to strike it down. That would do away with pre-existing conditions."

"No," Trump said, with irritation in his voice. "So that we can do new health care."

"But you've been trying to strike down pre-existing conditions," the host responded.

Again, he doesn't have a plan.

Trump also tried to interject that he got rid of the individual mandate of Obamacare, which was gutted in the GOP's 2017 tax bill. But that had nothing to do with actually providing coverage to people who need it now and was irrelevant.

Overall, Stephanopoulos's performance was exemplary — he knew the relevant facts, and he challenged Trump when he lied and misled. It's exactly the type of journalism that is needed for voters to make informed decisions in November.