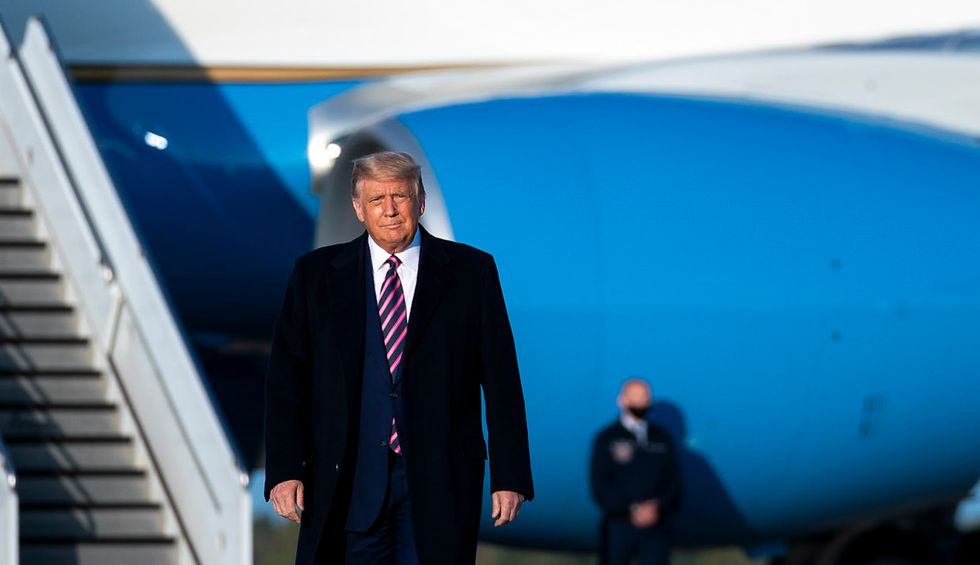 In a recent op-ed for the Washington Post, Republican Danielle Pletka declared that despite the fact that she refused to vote for Donald Trump in 2016, she now feels compelled to support him in 2020. The piece quickly caught fire online, inspiring ridicule and sympathy from differing corners and triggering a surprising amount of discussion.

In one sense, it's hard to see what the big deal was. The Post publishes opinion pieces in support of Trump frequently, and this one was not particularly special. Pletka herself is not a particularly notable figure. Like many op-eds, it was sloppy and unpersuasive, making huge leaps of reasoning and glossing over critical points in the argument. It didn't take seriously any compelling counterarguments. It was, in other words, a mere display of partisan loyalty from a Republican who would prefer to be inside the tent than outside of it.

Pletka decided to push her luck even further though, adding more grist for the partisan discourse by talking with the New Yorker's Isaac Chotiner, one of the most notoriously sharp interviewers.

In the face of incisive questioning, Pletka's defense of her view simply crumbled. The interview revealed that the deficits in her op-ed weren't simply due to a lack of sufficient space or an editor's aggressive cutting; her defense of voting for Trump really was as transparently vapid as it appeared.

Here are some key moments from the interview.

She claimed, for instance, that she worried that support for Biden will further "cancel culture":

[Chotiner:] Trump is probably making cancel culture, however much significance you attribute to it, significantly worse. That’s why I was surprised a little bit by the op-ed, because it seems like his defeat would be good for some of the things you’re worried about.

[Pletka:] Yes, except for the fact that I think the ship has already sailed.

[Chotiner:] And you think Joe Biden is captaining the ship? You mentioned Michelle Obama, and he obviously served the Obama Administration, and has a long history as a moderate Democrat.

[Pletka:] Yes. He does have a long history. I wish I felt more confident that he would be the Joe Biden that I knew, and by that I don’t refer to the Joe Biden of the Obama Administration, because I think he didn’t play a terrific role in the areas that I focussed on in foreign policy. The Joe Biden of the Senate, the Joe Biden who was a ranking member of the Senate Foreign Relations Committee, who was a chairman of the Senate Foreign Relations Committee, was a moderate. I don’t think that he has much to do with that guy anymore. But I would say, more importantly, that the Party left him behind, and he has had to race to catch up. And the argument that people make—that no, no, no, no, no, you are wrong, because we chose him—I think is a little bit irrelevant.

[Chotiner:] Who was nominated is irrelevant, you mean?

[Pletka:] Yes. I think that that choice was irrelevant, because I don’t think that those voters are the people who are steering the direction of the Party.

This makes little sense. She agrees that Trump is making the "cancel culture" — whatever that is — worse, but that "ship has already sailed." But she also acknowledges that Biden is on the moderate side fo the Democratic Party, but that the party left him behind. It's hard to square this with the fact that the party literally just nominated Biden to be its candidate, over many other candidates who presumably represent the "cancel culture" threat that she fears much more. But it's "irrelevant," she says, because the people who chose Biden — the majority of the party — aren't "steering the direction of the Party." (Worth noting: Pletka once claimed during the Democratic primary that the nomination of Elizabeth Warren was the only thing that could get her to vote for Trump.)

It's really hard to reply to this in any way other than scratching your head. She agrees Trump exacerbates a problem, that Biden doesn't, and that the voters chose Biden. But somehow another group of voters who didn't choose biden will exacerbate a problem that Trump is contributing to. And for that reason, she much vote for Trump.

The best response to this argument might just be: What?

It doesn't get any better. The interview continued:

[Chotiner:] You wrote, “I fear that a Congress with Democrats controlling both houses—almost certainly ensured by a Biden victory in November—would begin an assault on the institutions of government that preserve the nation’s small ‘d’ democracy.” You then list things Congress would do and include national health care on the list.

[Pletka:] Because, again, I think that if you have a unitary executive and legislative branch with absolutely no safeguards other than the courts, that they will usher in—like they did Obamacare, like they did the Iran deal—things that are fundamentally anti-democratic, or at least in anti-democratic spirits, things that will be bad for our country.

[Chotiner:] I can understand not liking the Iran deal or not liking Obamacare, but I’m confused about how they violate some democratic spirit of the country. Whereas some of the things that we’ve read about with Trump, about Ukraine, or about saying nice things about the people in Charlottesville, violated something we would hope is the spirit of our country.

[Pletka:] I’m not a huge fan of what-about-isms, since they’re easy to apply to almost everything. On the other hand, just because I didn’t like the Democrats doing it doesn’t mean I do like Trump doing it. And I don’t like the President of the United States calling up his counterpart in Ukraine and saying, “Hey, buddy, got some dirt on my opponent?” You see one as worse. I see them all as dangerous.

[Chotiner:] Obamacare and the Iran deal seem to me like fairly predictable policies of a Democratic Administration, just like tax cuts and the health-care plan Bush tried to get through were features of a Republican Administration. What I was wondering is why these things were threats to democracy, rather than just normal Democratic policies you don’t like?

[Pletka:] Some of them are normal Democratic policies that I don’t like, that I think are dangerous for our country. And some of them I think are anti-democratic. When I say anti-democratic, I mean small-“d” democracy. I think racial prejudice is despicable. I think racial prejudice against Black people, brown people, and white people is despicable. And I don’t want to see a country in which people are told that they are guilty for being white.

Again, her argument just didn't add up in her own terms. She warns that Democrats will do anti-democratic things like the Iran Deal and Obamacare, but she can't explain why those are actually anti-democratic.

It's not clear who is calling her a racist or excommunicating her from society — she appears on TV, publishes in the Washington Post, and gets interviewed by the New Yorker. But being extremely sensitive about charges of racism is extremely common on the right these days, and it's often used to deflect from any serious discussions of racism in the GOP.

And as the interview made clear, Pletka refuses to have those discussions, especially when they implicate her directly.

Chotiner pointed out that she used to work for Sen. Jesse Helms:

[Chotiner:] Saying this now about racial issues, how do you feel in hindsight about your work with Senator Helms? [Helms was known for decades of race-baiting campaign tactics and vehement opposition to the civil-rights movement.]

[Pletka:] I did foreign policy for Senator Helms. I worked for the chairman of the Senate Foreign Relations Committee. As far as I was concerned, in my work with him, he never uttered a racist statement, never betrayed a racial bias. To the contrary. And believed more than many of the people I worked with in human freedom, human rights, equality of opportunity. He fought for people who were disadvantaged. So there may have been a Jesse Helms one day who did things that were wrong.

[Chotiner:] You know things that were wrong. This isn’t a “may.”

[Pletka:] But I worked for him on the Middle East and South Asia, and I was very proud of what we accomplished.

[Chotiner:] You know his record on South Africa, though, correct? [Helms opposed any sanctions against the apartheid regime in South Africa. When Nelson Mandela visited the Capitol in 1994, soon after he was elected South Africa’s first post-apartheid President, Helms turned his back on him.]

[Pletka:] I didn’t work on South Africa. I worked on the Middle East and South Asia.

[Chotiner:] I understand that. But I’m saying you must know about the guy’s career? I mean, the Civil Rights Act, the Martin Luther King holiday, his interactions with Carol Moseley Braun, his ads, his comments about South Africa and African National Congress. This stuff isn’t completely unknown to you.

[Pletka:] I’m not quite sure what this has to do with my article.

[Chotiner:] You said that you were opposed to racism and all its forms. And I was just asking whether you had—

[Pletka:] Are you questioning whether I’m opposed to racism and all its forms?

[Chotiner:] I was questioning whether someone who is opposed to racism in all its forms has any second thoughts about Jesse Helms. Yes, that’s what I was asking.

[Pletka:] I think it’s fair to ask me anything you’d like. I’m assuming you think that it’s fair that I won’t answer certain questions, because you seem to want to trap me and discredit my views. So I’m just going to leave this topic alone, if that’s O.K., Isaac.

It was a revealing moment. She can't even account for her own work for a man whose racism is extremely widely known. She won't even defend it; she just completely shut herself down and became unresponsive. She doesn't seem to consider that a man's racism might have affected his policies in the Middle East.

Other Republicans and former Republicans — Max Boot, Stuart Stevens, Charlie Sykes, and others — have grappled with their own complicity with their party's racists for decades. In turning their backs on Trump, they realized that they had supported strands in their party that made him possible, and they expressed regret. But Pletka can't do that.

Should there be any surprise she's likely to vote for Trump?