9 days from hell: The GOP's dark vision for the US is taking us to the brink — again 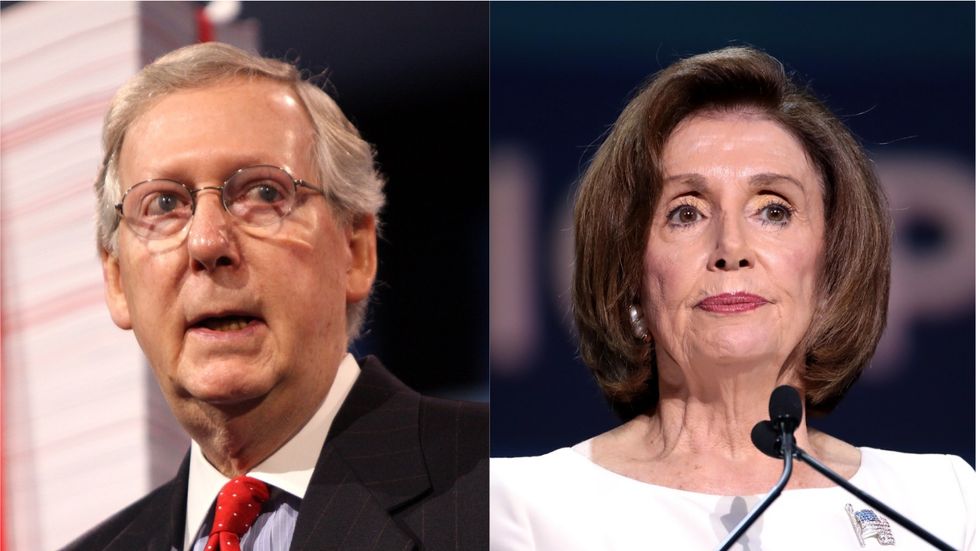 It's been 129 days since the House passed the $3.4 trillion HEROES Act, which Mitch McConnell has refused to take up, and it's 9 days until the government runs out of funding with the end of the fiscal year. Oh, and the election is in 43 days. It's also official: the now-annual September government shutdown clock has started.

House Democrats released their short-term continuing resolution to keep government funded until after the election. Playing with fire, they named December 11 as the next spending deadline, handing a potential time bomb to Trump who might very well still be trying to fight an election outcome in a court he's packed. Setting that aside, Pelosi announced "Democrats are proud to include provisions that save America's seniors from an up to $50 per month Part B premium hike. The CR also includes a one year surface transportation authorization extension, preventing disruption to America's communities." It also extends a bunch of health programs and the National Flood Insurance Program. It does not include $30 billion in agricultural payments for the U.S. Department of Agriculture's Commodity Credit Corp., a government entity that provides funding to stabilize farm incomes. The Republican Senate and White House want that money. Pelosi included it in her HEROES Act and is hanging on to it as leverage for more coronavirus relief.

McConnell put out a perfunctory tweet trashing the proposal, saying the "rough draft of a government funding bill shamefully leaves out key relief and support that American farmers need. This is no time to add insult to injury and defund help for farmers and rural America." He did not say he was opposed to it or that it wouldn't end up on the Senate floor. There is very little stomach among Republicans to add a government shutdown fight to the list of things they're dealing with before the election.

Even Sen. Joni Ernst, the embattled Iowa Republican, didn't say she would vote against the bill. "This is no time for political games," she said in a statement. "I'm calling on all of my farm-state colleagues in the House and the Senate—Republicans and Democrats—to stand with farmers and demand this support be included in the upcoming government funding bill." All of those farm-state colleagues are also aware that their states are nearly as crippled by coronavirus as are all the rest of the nation, and so aid to one sector, even a major one, isn't going to answer the problems their states face.

That and this, from a senior aide to Democrats:  “What the Trump Administration wanted added to the clean CR wasn't help for farmers—it was more than $20 billion more taxpayer dollars that the Trump Administration views as a bottomless, unaccountable political slush fund." Trump views the entire Treasury as a political slush fund, to be honest, so this is a very fair assessment.

If you're really into reading negotiating tea leaves (and what else have we got to do right now?) you can look at the fact that Pelosi also left out $2 billion in child-nutrition assistance for a program that runs out at the end of the month. That could mean the coronavirus relief negotiations with Treasury Secretary Steven Mnuchin are progressing. Could, mind you. They've been at an impasse for weeks with Republicans so far willing to let McConnell's political games be their only contribution.

Republicans are also perfectly willing to let thousands, tens of thousands more people get sick and die from coronavirus, while they completely destroy the institution of the Senate to install a "pro-life" Supreme Court justice.

It's going to be a long, hellish nine days. And just a note here so everyone remembers: this is not normal. This is not how a functioning government operates. There was a time when shutdown threats didn’t happen several times a year. When shutdowns were a thing to be avoided at all costs. This all started back with Newt Gingrich when the Republican party decided to give up on governing and become total nihilists. Theirs is a dark and terrifying vision for the nation, and we’re hanging on by a thread here to avoid it.