Why California’s wildfires keep getting worse 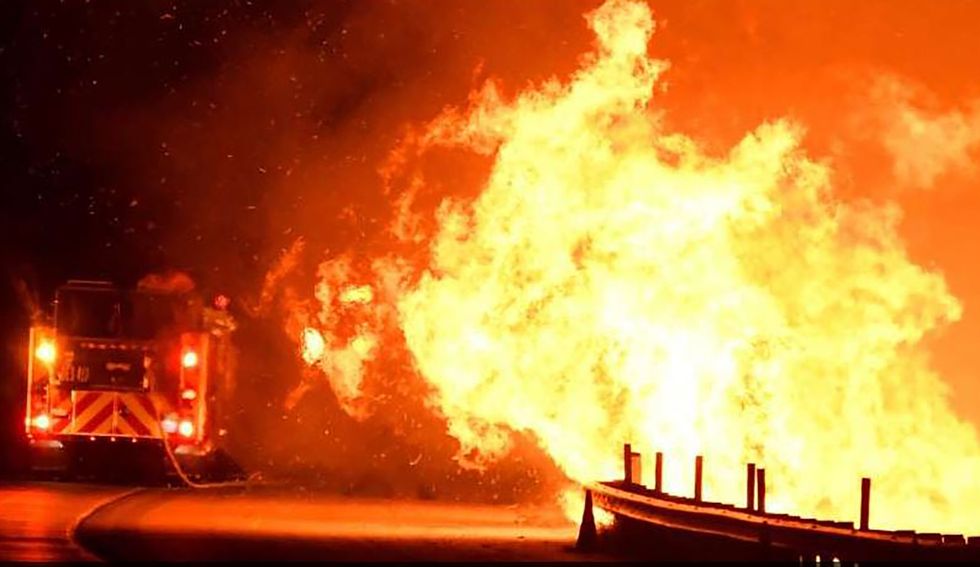 OAKLAND, Calif.— In a normal year, the intensity of the existing wildfires in California would be apocalyptic on their own. Thousands of Californians have had to evacuate their homes due to fire while simultaneously staying wary of social distancing rules to avoid suffering the added respiratory distress caused by coronavirus. But this year's wildfires aren't just distressing for their timing, coming amid the pandemic. They are also literally and physically much worse, in terms of area burned.

On Monday, California Governor Gavin Newsom explained at a briefing that this year's wildfire season is 25 times worse than last year's season in terms of acreage burned. At the moment, the LNU Lightning Complex fire, which is burning north of San Francisco, and the SCU Lightning Complex, which is burning in parts of Santa Clara, Alameda, Contra Costa, San Joaquin and Stanislaus counties, have both become two of the biggest wildfires in the state's history. The past few years have had their share of record-breaking fires: In 2018, the state experienced its deadliest wildfire, the Camp Fire, in Butte County. In 2017, the Tubbs fire became the third deadliest fire in the state.

"They are certainly getting worse over time," Susan Kocher, a forestry advisor at the University of California-Cooperative Extension Central Sierra, told Salon. "We burned fewer acres in wildfires in 2019 than 2018, but overall, yes, the trend is progressing to burning more and more acres at high severity over time and affecting more people through evacuations and damages to homes and communities."

Common culprits for the worsening fire season include climate change and a lack of regular burning due to human development. While both problems factor into why wildfire season is intensifying, experts in the field tell Salon it's more complicated.

"Certainly we see that climate change has made the landscapes more ready to burn for longer times of the year, especially in Northern California, but we also have very, very dense forests due to a century of fire exclusion in many places and this has caused an overabundance of trees that just says 'fuel' for the fires," Chris Dicus, professor of wildland fire and fuels management at California Polytechnic State University and President of the Association for Fire Ecology, told Salon. "Also, sometimes overabundant trees cause all the trees in the forest to be weakened because there is only so much water and nutrients to go around."

Notably, the two largest fires in Northern California were caused by lightning strikes.

Despite being painted as "unprecedented" in various media outlets, Dicus disagreed.

"This is not unprecedented," Dicus said. "This actually happened in 2008, and these fires are different from the fires that we've seen over the last five years or so."

Michael Mann, Distinguished Professor of Atmospheric Science at Pennsylvania State University told Salon via email that the connection between climate change and the severity of California wildfires isn't subtle.

Yana Valachovic, a Forest Advisor and County Director at University of California Cooperative Extension–Humboldt and Del Norte Counties, told Salon that 100 years of fire suppression is catching up to the state as well. Valachovic said before California was settled by white pioneers around the gold rush in the 1850s, Native Americans frequently used fire as a tool —for example, to clean out an infestation of bugs in acorns. When ranchers burned, they usually could be suppressed quickly.

"Fire can be really important for stimulating biodiversity and creating more food sources," Valachovic said. "After years of suppressing those fires, now we get an ignition, whether human-caused or lightning-caused or power lines down, and you have an accumulation of materials that have accumulated over various time periods, but the quantity of fuel is substantially greater than it was historically."

Valachovic added: "The general population felt like these were safety measures of protecting us, but in the action of protecting us, we haven't been developing a similar strategy to manage accumulation of dead material over time."

In other words, the problem is three-fold, and much more complicated than President Trump's claim that California has got to "get rid of the leaves."

"However, almost all of the ecosystems in California are fire-dependent and like to burn including shrub and grassland systems, so obviously forest management will not help in those areas," Kocher said.

So, what's California to do? Valachovic said there are opportunities for the state legislature to strategize how to make California more resilient year-round, not when there's just smoke in the air.

"I think we have lots of room for improvement, and there's some opportunity for the legislature this year to try and rethink how we approach defensible space," Valachovic said. "I think we need to really strategize our alert systems and perhaps standardize them uniformly across the state so that we get information and can move quickly and get people out; I think we need to practice evacuation, and I think we need to value our open space and value our agriculture."

Valachovic said it's going to take a change in mindset to not try and fight the fires, but rather be better prepared to adapt to them.

"I think it's going to take a fundamental sea change for us to begin to pivot towards thinking about resiliency," Valachovic said.