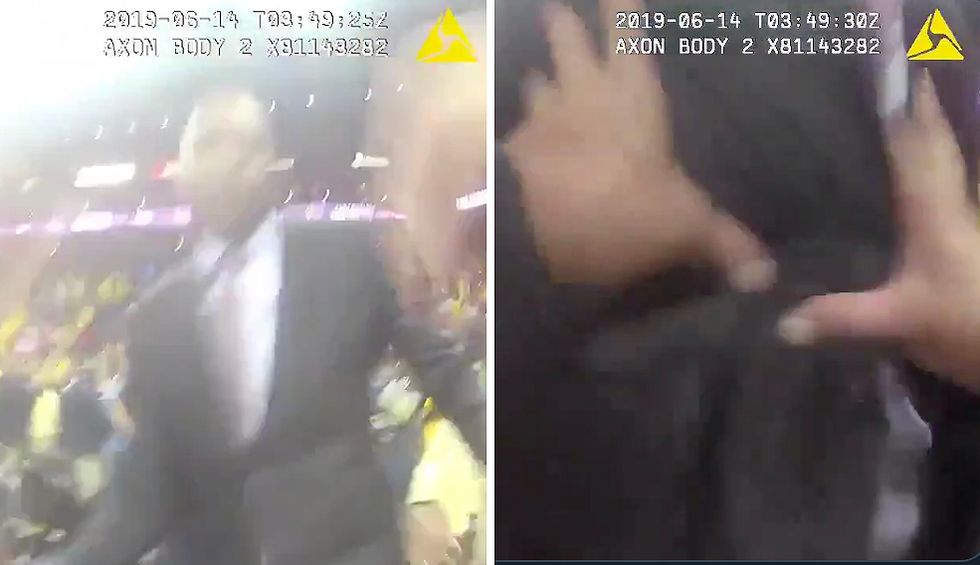 On June 13, 2019 — after the Toronto Raptors defeated the Golden State Warriors in a basketball game in Northern California — Raptors President Masai Ujiri got into a shoving match with Alameda County Sheriff’s Deputy Alan Strickland. And a newly released video, according to KTVU-TV in the Bay Area, makes it abundantly clear that Strickland was the initial aggressor in that incident.

Ujiri walked onto the court after the game to congratulate the Raptors, and Strickland put up his arm to stop him and make sure he had his security credentials. The video, according to KTVU’s Lisa Fernandez, shows that Ujiri “did have credentials out; he was seen on the video tucking his badge into his suit pocket. He was thrilled, and he was trying to rush down to congratulate his victorious team.”

The video, Fernandez reports, shows that Strickland was the first to shove.

“Strickland is seen in the high-definition security video pushing Ujiri in the chest, as an onlooker grabs at the deputy’s shoulder to calm him down,” Fernandez explains. “Strickland pushes him a second time. Strickland is heard on his own body camera telling Ujiri to ‘back the fuck up.’ At that point, Ujiri shoves the deputy back.”

Masai Ujiri's legal team has released this body camera footage of his encounter with a sheriff's deputy as he tried… https://t.co/ov4YNh9Gvl
— Bleacher Report (@Bleacher Report)1597804538.0

Before this video was released, Fernandez notes, “The public had to rely on witness accounts of the encounter and a shaky cell phone video taken from several feet away, which circulated on social media. Witness accounts mostly corroborate what the video shows: a brief, heated altercation between the two men.”

In February, Strickland filed a lawsuit, in federal court, against Ujiri, the Toronto Raptors, Maple Leaf Entertainment and the National Basketball Association and alleged that Ujiri shoved him so hard that he suffered head, jaw, chin and dental injuries. Strickland also filed a worker’s compensation lawsuit, claiming that Ujiri tried to “storm” the court, did not respect security measures and “hit him in the face and chest with both fists.”

Alameda County Sheriff Greg Ahern sided with Strickland, calling for Ujiri to be charged with battery of a peace officer. But Ujiri, in a counterclaim against Strickland, maintained that Strickland was the aggressor — saying, “Mr. Strickland used unnecessary and excessive force. There was no reason to view Mr. Ujiri as a threat to anyone and no reason for Mr. Strickland to curse at Mr. Ujiri and forcefully shove him as numerous witnesses observed.” And the video bears out Ujiri’s line of defense, showing that Strickland shoved the Raptors president first.

And Alameda County Sheriff Greg Ahern asked for Ujiri to be charged with battery of a peace officer. The sheriff's… https://t.co/Tid6PMuvQ1
— Bruce Arthur (@Bruce Arthur)1597804377.0

Ujiri’s attorneys have described Strickland’s account of the incident as a “complete fabrication” and “dishonest” and stressed that Strickland was “undeniably the initial aggressor.” And they described it as an example of the type of “narrative that has become somewhat familiar: a law enforcement officer, using their position, engages in unjustified violence against a peaceful individual, then lies about the encounter by characterizing the victim as the aggressor.”