Tucker Carlson: It’s 'probably illegal' for Biden to only consider women of color for vice president 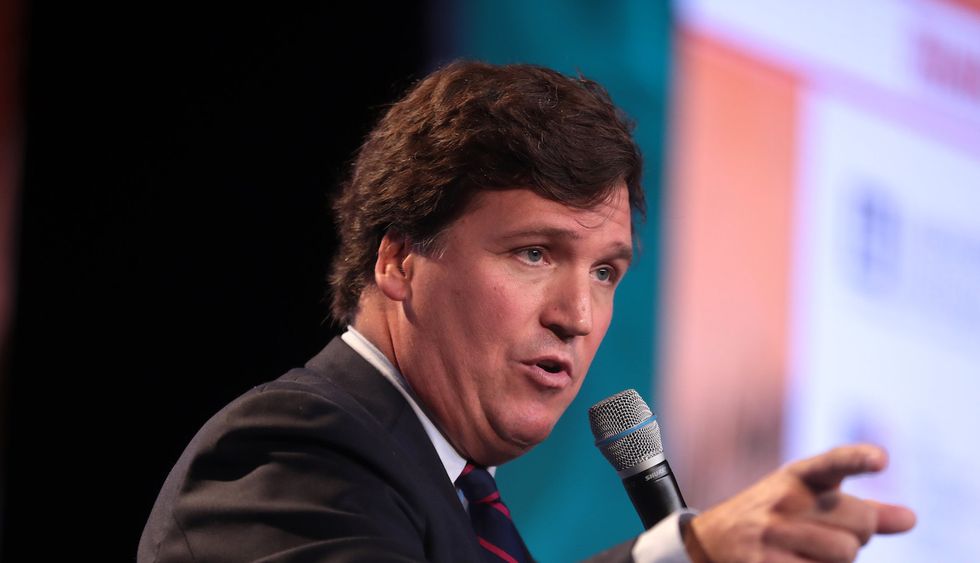 Fox News host Tucker Carlson, who once dismissed white supremacy as a "hoax" and "not a real problem," falsely claimed on Monday that it was "probably illegal" for presumptive Democratic presidential nominee Joe Biden to only consider women of color for the vice presidency.

Biden has since said he would pick a woman of color, but his list is not limited to Black women, with Sen. Tammy Duckworth, D-Ill., who is of Asian descent, and Gov. Michelle Lujan Grisham, D-N.M., who is Latinx, reportedly under consideration.

But Carlson — who presumably has a new head writer after the last one was ousted for posting racist and sexist diatribes online — singled out Sen. Kamala Harris, D-Calif., Rep. Karen Bass, D-Calif., and former Georgia gubernatorial candidate Stacey Abrams for criticism on Monday.

The Fox News host argued that "in a normal year, no mainstream candidate would consider any of these people," all of whom "would be disqualified without debate." He described Abrams as "delusional," Bass as a "lunatic Fidel Castro acolyte who praised Scientology" and Harris as "transparently transactional."

"Even Democratic primary voters who have a strong stomach found her repulsive," Carlson said of the senator from California. "Pretty much no one who knows Kamala Harris likes her."

Carlson, who has repeatedly claimed to his viewers that white people in the U.S. are under "attack," then floated that it was "probably illegal" for Biden to limit his short-list to women of color.

"Biden has decided to hire exclusively on the basis of qualities that are both immutable and completely irrelevant — race and gender — and that's it," the Fox News host insisted. "'But wait a second,' you ask. 'Isn't that insulting? Isn't it wrong? Isn't it probably illegal?' 'Yes, it is,' all three of those things. But no one's pushing back against it, so Biden is doing it."

The false attack was par for the course for Carlson, who earlier this month attempted to argue that Duckworth, an Iraq veteran who was awarded a Purple Heart after losing both her legs when her helicopter was shot down in 2014, "hates America." He later doubled down, calling her a "coward" and a "fraud" after she expressed support for a national dialogue about removing certain statues.

"But what I actually said isn't the reason Mr. Carlson and Mr. Trump are questioning my patriotism, nor is it why they're using the same racist insults against me that have been slung my way time and again in years past, though they have never worked on me," she wrote in a New York Times op-ed. "They're doing it because they're desperate for America's attention to be on anything other than Donald Trump's failure to lead our nation, and because they think that Mr. Trump's electoral prospects will be better if they can turn us against one another."

But the attacks on Biden's potential running mates have not been limited to Trump and Fox News. Recently, Biden's own advisers have come under fire for their remarks about Harris and fellow contender Susan Rice, who served as national security adviser under former President Barack Obama.

Former Democratic Party chair Ed Rendell, a close Biden ally, told CNN last week that Harris can "rub people the wrong the way." Rendell later observed that Rice had smiled during a television appearance, which was "something that she doesn't do all that readily." He added that he found her "actually somewhat charming."

Former Sen. Chris Dodd, D-Conn., who is leading Biden's vice presidential search, was quoted by Politico as complaining that Harris "had no remorse" for hitting out at Biden during the primary debates.

"Dodd felt it was a gimmick — that it was cheap," a donor who spoke to Dodd about the exchange told the outlet.

Other Biden allies argued to CNBC that Harris was "too ambitious" to be vice president.

Harris appeared to hit out at those attacks during her Friday appearance at Black Girls Lead 2020, a virtual conference for young Black women.

"There will be a resistance to your ambition," she said. "There will be people who say to you, 'You are out of your lane,' because they are burdened by only having the capacity to see what has always been instead of what can be. But don't you let that burden you."

Abrams, who has also been criticized as being ambitious, pushed back in an interview with MSNBC on Sunday, arguing it would be a disservice to woman of color and "women of ambition" not to tout their credentials for vice president.

"When you do something different — when you meet the standards that are normative for men with a behavior that they don't expect from you — either as a woman or person of color, then you're going to get critiqued," she said.

"It's been relentless. It's been unfortunate, but I must say it's been predictable," she told The Washington Post. "It's extremely disappointing, because many of these attacks . . . are being made by Democratic men who should know better. I would hope that in this selection process, we are mindful that Black women — and women of color — deserve respect."