Trump's support in the military has plunged 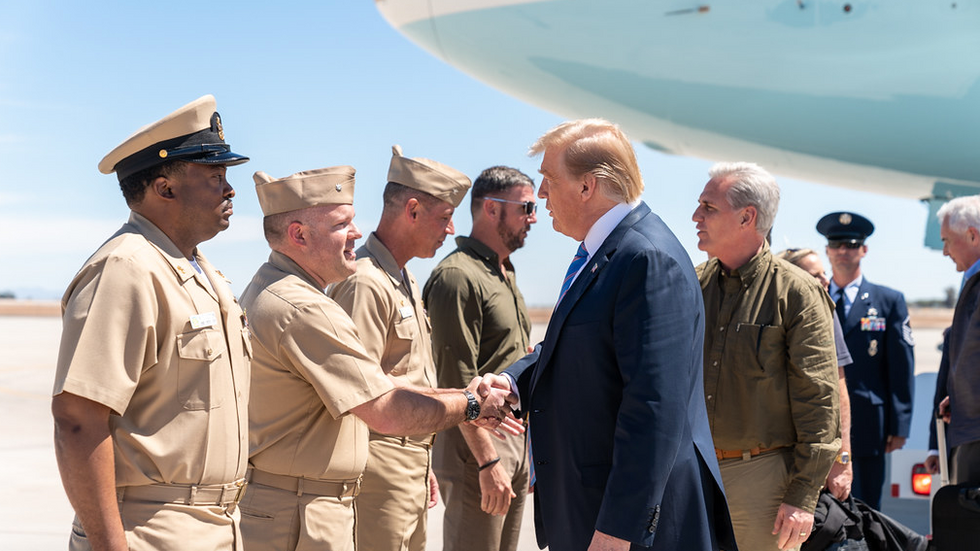 President Donald Trump’s sycophants in the right-wing media continue to insist that he is more pro-military than his Democratic opponent, former Vice President Joe Biden. But according to a new Military Times poll, Biden enjoys more support among active-duty members of the U.S. military.

The Military Times, conducting the poll with the help of the Institute for Veterans and Military Families at Syracuse University, asked troops: if the election were held today, who would you vote for? And 43% favored Biden, while 37% favored Trump — and 12.8% said they would vote for a third party.

Leo Shane III reports that the poll showed a “slight but significant preference” for Biden “among troops surveyed.”

“The results, collected before the political conventions earlier this month, appear to undercut claims from the president that his support among military members is strong thanks to big defense budget increases in recent years and promised moves to draw down troops from overseas conflict zones,” Shane explains.

The poll, Shane adds, shows that 49.9% — almost half — of active-duty U.S. troops surveyed had an unfavorable view of Trump, while only 38% had a favorable view. And 42% of respondents said they “strongly” disapprove of Trump’s performance.

Shane notes that at the start of Trump’s presidency back in early 2017, 46% of troops had a favorable view of him. Nonetheless, Shane notes, Trump still fares better among troops in Military Times polling than his predecessor, former President Barack Obama, did at the time he left office.

“Even with the steady decline, Trump’s popularity in the poll remains better than former President Barack Obama,” Shane observes. “Obama had a 36% favorable rating and a 52% unfavorable rating in a January 2017 Military Times poll. Still, the dipping popularity among troops — considered by Republican Party leaders to be part of the base of Trump’s support — could prove problematic for the president in the upcoming election.”