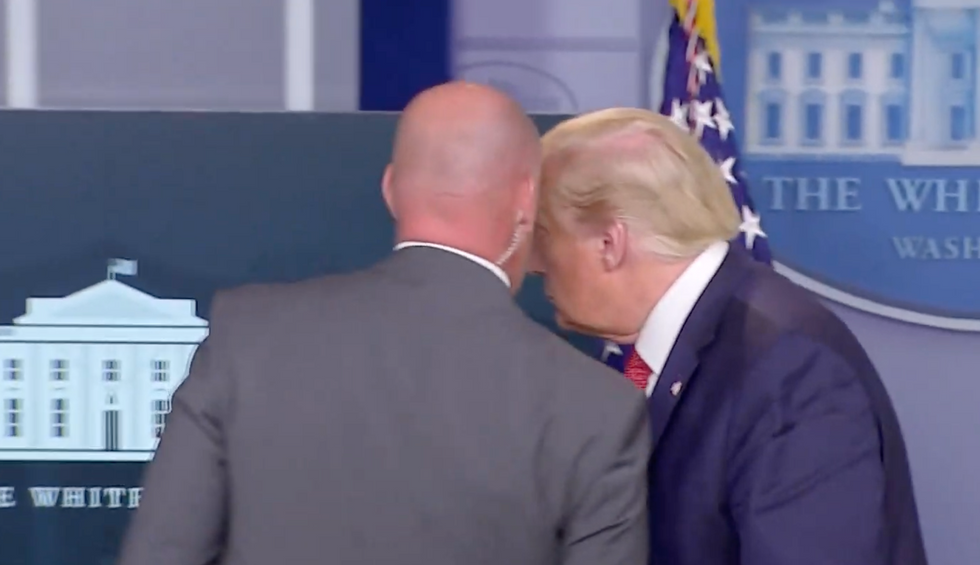 President Donald Trump was suddenly evacuated from the White House press briefing Monday evening after an aide whispered in his ear. Shortly thereafter, he returned to the briefing room and said there had been a shooting outside.

The president had only been speaking for a few minutes before he was interrupted, presumably by a member of the Secret Service. Reporters were not immediately told the reason for his exit.

"There was a shooting outside of the White House," Trump said upon returning. "And seems to be very well under control. I'd like to thank Secret Service for doing their always quick and very effective work. But there was an actual shooting. Somebody's been taken to the hospital. I don't know the condition of the person. Seems like the person was shot by the Secret Service. So we'll see what happens."

He said he had no more details at the moment, but he added that Chief Justice John Roberts heard the shots.

He said he was taken to the Oval Office by the Secret Service.

Trump said he "understood" that the "suspect" was armed, but he said that others would clarify the facts later.

Asked if he was rattled, he said: "I don't know. Do I seem rattled? It's unfortunate that this is a world. But the world had always been a dangerous place. It's not something that's unique."