Trump openly defends the violence of his supporters 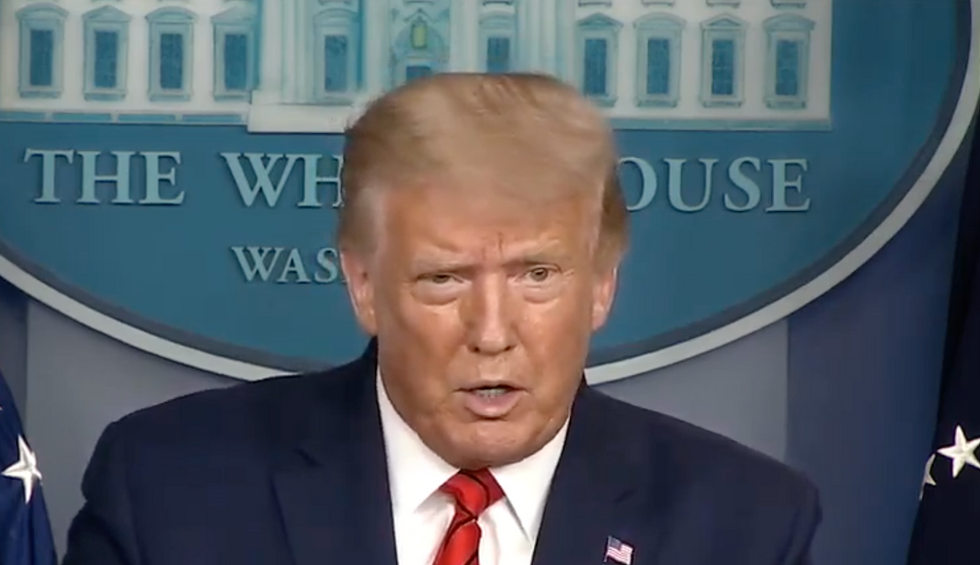 President Donald Trump openly defended the violence of his own supporters during a press briefing on Monday, diminishing the recent attacks in Portland and Kenosha while condemning what he called "this horrible left-wing ideology that seems to be permeating our country."

Asked about his caravan of supporters who drove the streets of Portland, at times shooting paintballs and pepper spray at counter-protesters, Trump refused to condemn the violence.

"Do you want to take this opportunity to condemn your supporters who were shooting paintball guns in Portland?" asked CNN's Kaitlan Collins.

"I understand they had large numbers of people that were supporters, but that was a peaceful protest," Trump said, showing his narcissistic need to boast about the supposed size of his support. The videos, on the other hand, showed that they were not at all peaceful:

Trump continued: "And paint, paint as a defensive mechanism, paint is not bullets." He then went on to discuss the case of one of his supporters who was shot and killed in Portland, though a suspect has not yet been publicly identified. He claimed the shooter was a supporter of the media.

The video above shows, despite Trump's claim, little indication that the pepper spray and the paintballs were used "defensively." And while paintballs are certainly not bullets, they can be painful and cause injury; their use against other people can constitute criminal assault. Trump's comments were particularly ironic because he had already criticized Joe Biden and the media for supposedly labeling violent riots as "peaceful protests." While this idea has become a popular meme on the right, the truth is that the term "peaceful protests" has been used to distinguish the majority of nonviolent demonstrators from the smaller groups who have carried out violence.

And when the subject matter turned to another Trump supporter who did use bullets, the president once again defended his side.

"Are you going to condemn the actions of vigilantes like Kyle Rittenhouse?" another reporter asked, referring to the 17-year-old charged with murder after shooting three people and killing two in Kenosha.

Rittenhouse's lawyers have signaled that they will claim self-defense for his actions. And in his comments, Trump offered support for this theory.

"That was an interesting situation," Trump said. "He was trying to get away from them, I guess, it looks like. And he fell, and then they very violently attacked him. And it's something that we're looking at right now, and it's under investigation. But I guess he was in very big trouble — he probably would have been killed. But it's under investigation."

Trump defends Kyle Rittenhouse, the 17-year-old supporter of his who is charged with murdering two protesters in Ke… https://t.co/AdYkJKPM5U
— Aaron Rupar (@Aaron Rupar)1598912136.0

Trump didn't note that the video showing Rittenhouse falling and being attacked by a group came after he had already shot someone in the head, according to the official reports. The group was apparently trying to disarm Rittenhouse.

The president's remarks reflect an increasingly worrying trend on the right. Many conservative media commentators have defended and even heaped praise on Rittenhouse for his violence. They may well be encouraging others to follow in his footsteps to counter Black Lives Matter protests. It's easy to imagine how this kind of escalation can spiral out of control, and it's the president's responsibility to encourage calm and discourage violence Instead, his words could inspire more conflict.