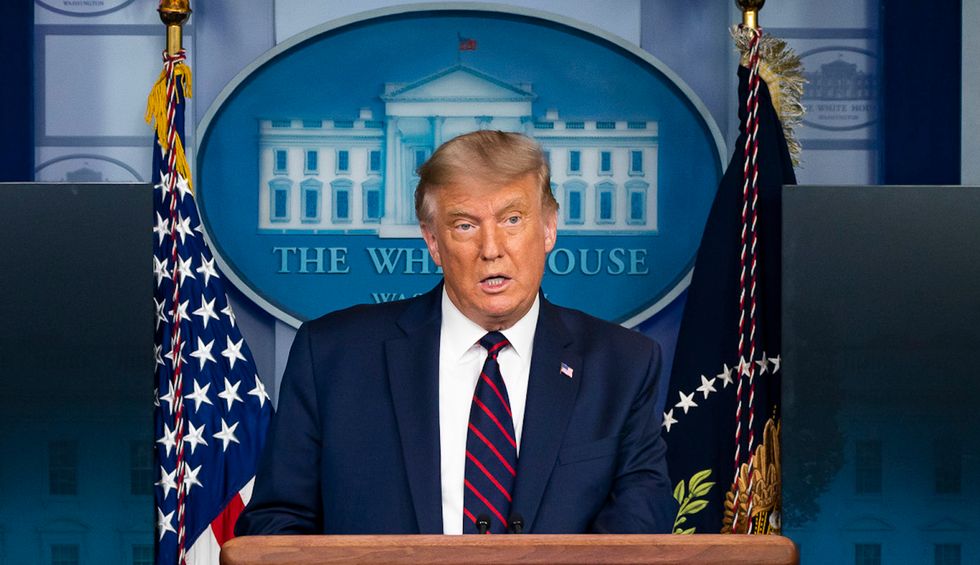 On Sunday, Donald Trump held a press conference to announce a "therapeutic breakthrough" that was anything but. Trump said that his FDA had issued an Emergency Use Authorization (EUA) for antibody-rich plasma to treat Covid-19 patients, and claimed that he had overcome resistance from members of the "deep state" embedded at the agency to deliver it. Scientists were quick to point out that while plasma therapy has shown promise in some patients, its efficacy hasn't been established in controlled trials and added that the authorization would have limited impact anyway given that tens of thousands of patients have already received the treatment.

On its face, this seemed like Trump trying to grab some overly credulous headlines heading into the GOP convention. Last week, it was reported that White House Trade Advisor Peter Navarro "had aggressively confronted FDA officials" during a meeting to discuss Covid-19, saying, "You are all Deep State and you need to get on Trump Time.'" According to Axios, "Navarro has been venting at the FDA for weeks at what he perceives as its slowness to approve therapeutics" to combat the pandemic.

But Peter Hotez, a pediatrician and vaccine scientist at Baylor University, suggested that there might be more to it than that. "I think the reason why the White House got involved has less to do with an EUA for plasma therapy (although maybe it's a way they can appear to be doing something substantive) and more to do with getting the public feeling comfortable with EUAs," he wrote on Twitter. Hotez speculated that their "ulterior motive" was to "lower the bar for EUAs in general, in order to push what they really want - an EUA for a COVID19 vaccine."

That's consistent with a report in The Financial Times that "the Trump administration is considering bypassing normal US regulatory standards to fast-track an experimental coronavirus vaccine from the UK for use in America ahead of the presidential election."

That should come as no surprise. It's been widely reported that Trump's campaign staff are pinning their hopes on the public health crisis at least beginning to fade and some economic recovery beginning by the election. And if they can't have that, a rosy prediction that they'll soon begin distributing a vaccine and a promise that we could return to some sort of normal in the near future might be good enough.

But if Team Trump is planning to pressure the FDA to authorize the use of a vaccine that hasn't been adequately tested as an "October surprise," it won't work, for a couple of reasons.

First, there's Trump's credibility problem. A Pew poll conducted in June found that only 30 percent of respondents said that Trump and his administration "get the facts right" about the pandemic "all" or "most of the time," while 65 percent said the regime gets it right "only some of the time" or "hardly ever." It's worth noting that Trump's approval rate and support in head-to-head polls against Joe Biden are significantly higher than 30 percent, so even a lot of Republicans aren't buying what the White House is selling about Covid-19.

As of this writing, Biden leads Trump by 9 points in FiveThirtyEight'saverage, and a Yahoo News poll released today found that only 3 percent of Biden supporters say there is any chance that they will change their minds "between now and the election.”

Second, nobody will be taken by surprise given how clearly Trump is projecting that he's likely to make this move. The media's response to Trump's Sunday presser suggests that they're becoming more skeptical about Covid-related information coming out of the White House than they have been about Trump's happy pronouncements about "historic" trade deals with China or nuclear agreements with North Korea before their chimeric nature became clear. You can't have an October surprise if everyone sees it coming.

But even if a rushed emergency approval for a new vaccine wouldn't help Trump politically, it could have some real negative consequences. In 1976, Gerald Ford was faced with a more modest infectious disease outbreak than what we're experiencing today in the lead-up to his election. According to Discover Magazine, "while the World Health Organization adopted a cautious 'wait and see' policy to monitor the virus’s pattern of disease and to track the number of emerging infections, President Gerald Ford’s administration embarked on a zealous campaign to vaccinate every American with brisk efficiency."

With President Ford’s reelection campaign looming on the horizon, the campaign increasingly appeared politically motivated. The rationale for mass vaccination seemed to stem from only the barest of biological reasoning... those who were infected with the flu only suffered from a mild illness while the vaccine... resulted in over four-hundred and fifty people developing the paralyzing Guillain-Barré syndrome. Meanwhile, outside the United States’ borders, the flu never mushroomed into the anticipated public health disaster. It was the pandemic that never was.

Not only did hundreds of people develop debilitating illness from the vaccinations, but more significantly, Gerald Ford's "fiasco," as The New York Times characterized it, is believed to have contributed to the rise of the anti-vaccine movement in the 1980s and 1990s. Expect to see plenty of stories on that bit of largely forgotten history if Trump announces a game-changing vaccine breakthrough in October.