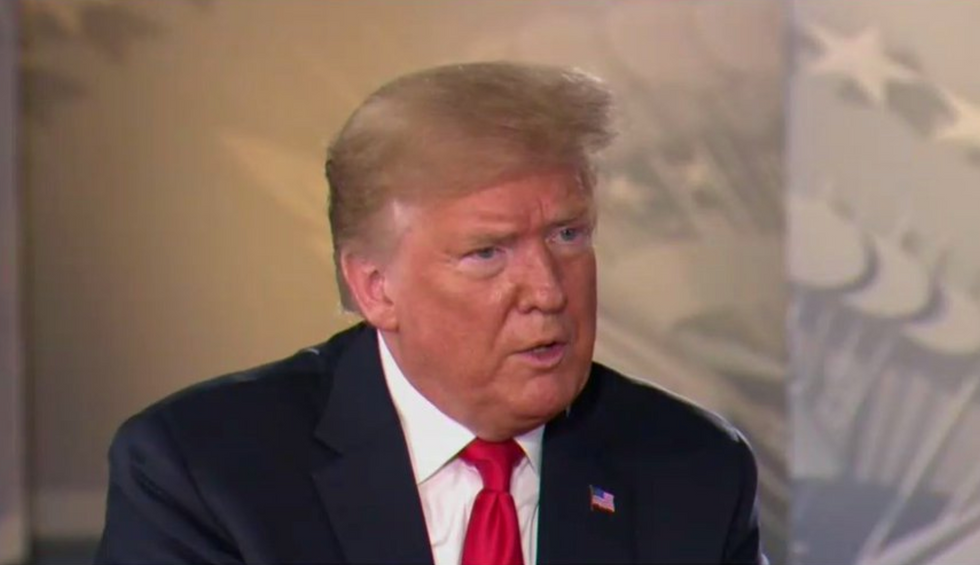 President Donald Trump on Thursday told Fox Business that he will continue to block aid to the U.S. Postal Service (USPS), publicly acknowledging that doing so would undermine states' plans to expand mail-in voting for Election Day.

House Democrats have pushed to include $25 billion in aid to the USPS and $3.5 billion in supplemental election funding as part of the next phase of coronavirus relief, but Trump has vowed not to approve the emergency funds.

"They need that money in order to have the Post Office work, so it can take all of these millions of ballots," he told Fox Business host Maria Bartiromo on Thursday. "If they don't get those two items, that means you can't have universal mail-in voting. Because they're not equipped."

Trump made a similar comment during his Wednesday news briefing on the coronavirus pandemic.

The remarks sparked alarm among journalists.

Trump, trailing significantly in the polls, has railed against mail-in voting for months, falsely alleging the practice is rife with fraud and baselessly arguing it would hurt Republicans. In fact, mail ballot fraud is virtually non-existent, and some states already have all-mail elections, including deep-red Utah.

Trump similarly threatened to veto the $2.2 trillion CARES Act back in April over the inclusion of funding for the USPS. The White House and the Democrats ultimately compromised, agreeing to provide the cash-strapped agency a $10 billion loan with administration-friendly terms set by Treasury Secretary Steven Mnuchin.

Trump's comments come as Democrats worry that cost-cutting moves by recently-installed Postmaster General Louis DeJoy, a major donor to the president and the Republican Party, will impact the expected surge in voting by mail this fall. Since DeJoy took over, the agency has cut overtime and changed other policies, which have slowed down mail delivery across the country. The USPS has additionally removed mail sorting equipment from some post offices, leaving mail to "pile up," according to the head of the Iowa Postal Workers Union.

Speaker of the House Nancy Pelosi, D-Calif., and Senate Minority Leader Chuck Schumer, D-N.Y., said last week that DeJoy had "confirmed that contrary to prior denials and statements minimizing these changes, the Postal Service recently instituted operational changes" shortly after he assumed office.

The agency has also moved forward on a proposal to nearly triple states' postage cost to send mail ballots. USPS General Counsel Thomas Marshall told state election chiefs that they should use high-priority first-class postage, which costs 55 cents per ballot, instead of third-class postage, which costs 20 cents per ballot, because third class may cause voters to miss voting deadlines, The Washington Post reported.

But postal workers have long treated election mail as first-class items, the outlet noted. Democrats expressed worry that the USPS might direct postal workers to stop doing so under DeJoy's cost-cutting agenda.

"If any changes are made to long-standing practices of moving election mail just months ahead of the 2020 general election, it will cause further delays to election mail that will disenfranchise voters and put significant financial pressure on election jurisdictions," Schumer and Sens. Amy Klobuchar, D-Minn., Gary Paters, D-Mich., Tom Carper, D-Del., wrote in a letter to DeJoy signed by all 47 Senate Democrats.

"Many state deadlines allow voters to request absentee ballot applications and absentee ballots within a few days of Election Day, so it is vital that standard delivery times remain low and pricing remain consistent with past practices to which election officials and voters are accustomed," the senators added.

House Democrats also warned that such a move would disenfranchise voters.

"The House is seriously concerned that you are implementing policies that accelerate the crisis at the Postal Service, including directing post offices to no longer treat all election mail as first class," Pelosi and Oversight Chairwoman Carolyn Maloney, D-N.Y., said in a letter signed by more than 170 House Democrats. "If implemented now, as the election approaches, this policy will cause further delays to election mail that will disenfranchise voters and put significant financial pressure on election jurisdictions."

The USPS said in a statement to The Post that it had long based delivery times on the class of postage used, including election mail, and "consistently recommended" that first-class mail be used. It also urged officials to clearly label election mail to help postal workers identify those items.

"To ensure that voters who wish to use the mail to vote can do so successfully, it is critical that election officials and voters are mindful of the time that it takes for us to deliver ballots, whether it is a blank ballot going to a voter or a completed ballot going back to election officials," the agency said. "In other words, the time required for both legs of a ballot's delivery through the mail must be taken into account.

"In many cases, certain deadlines concerning mail-in ballots may be incompatible with the Postal Service's delivery standards, especially if election officials use marketing mail to send blank ballots to voters," it added. "Using marketing mail will result in slower delivery times and will increase the risk that voters will not receive their ballots in time to return them by mail."

However, a Michigan postal worker rejected the agency's claim.

You can watch Trump's interview with Fox Business below via Twitter:

Trump admits he's sabotaging the Postal Service so universal mail voting will be impossible during an election that… https://t.co/mmtpWAhTO9
— Aaron Rupar (@Aaron Rupar)1597326131.0