This election will be decided by whether Trump can steal it 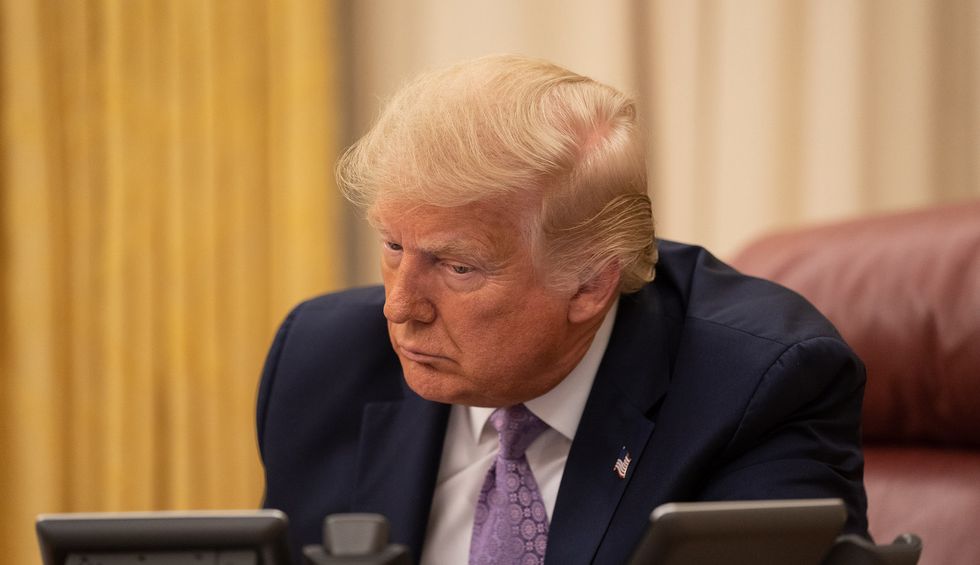 I'm as big a political junkie as they come. I love reading polls, monitoring their day-to-day fluctuations, like a fantasy sports bettor studying blocks of player stats. I not only watch politicians give speeches, I engage in blow-by-blow commentary by my fellow junkies on Twitter. I got caught up in this election's "veepstakes" and debating the various women under consideration by former Vice President Joe Biden as his future vice president, and it was satisfying to share my thoughts on the final choice, Sen. Kamala Harris of California. I've faithfully watched every episode of Crooked Media's YouTube series.

God help me, I even like the Lincoln Project ads.

But indulging my desires these days always comes with a side dose of existential dread. Ads, speeches, campaign strategy — all the usual detritus of a normal political cycle — are minor concerns in the face of the only story that really matters right now: Donald Trump is trying to destroying the U.S. Postal Service in order to keep votes by mail from being delivered on time and counted.

This election, at the end of the day, is coming down to one single question: Will Trump be able to steal it?

Or will the voters rally and find a way to keep Trump from destroying our ability to vote?

The bad news right now is so bad that it's hard to look at it directly. Trump's efforts to undermine the Postal Service, so Americans can't reliably or effectively vote by mail, are working. They could very well be sufficient to steal an election, especially since Biden's healthy national lead in the polls is much tighter in swing states like Florida, Pennsylvania and Wisconsin.

There are already slowdowns in mail delivery, caused by the "reforms" of Postmaster General Louis DeJoy, a major Trump donor. Things are expected to get much worse in the coming weeks, as Trump and the White House focus on the fact that sabotaging the post office could very well be the key to tanking an election that is expected to be primarily conducted by mail, due to the coronavirus pandemic. The postal workers' union in Iowa reports that mail sorting machines are being removed from some post offices, which will slow things down more.

On Thursday, it was reported that the post office outright told the state of Pennsylvania, which was critical in the 2016 election and will be again this year, that mail-in voting simply won't work, due to funding cuts and slowdowns. The state is suing to get the ballot deadline extended by three days, but even that might not be enough to ensure that ballots mailed before Election Day are delivered on time and counted. If it's happening in Pennsylvania, we can be assured it's happening elsewhere, and likely in other swing states that will determine this election.

The usual political punditry feels like decadence in this environment. It's hard to care about how an ad or a campaign slogan "plays" in swing states, when the real question is whether people will even get to vote at all.

But it's also not a time to wallow in despair. The situation is not hopeless. The good news is that there's a real opportunity for voters to rally and take real action to make sure their vote is counted. Organizers and journalists, thankfully, have considerable resources when it comes to convincing voters that this threat is real and must be taken seriously.

For one thing, like a hokey Hollywood supervillain who has a scenery-chewing monologue where he lays out all his dastardly plans, Trump has outright confessed to what he's doing.

In a Fox Business interview on Thursday, Trump explained that he's blocking emergency coronavirus funds to the USPS because "they need that money in order to have the post office work, so it can take all of these millions of ballots" and without it, "you can't have universal mail-in voting. Because they're not equipped."

Hard as it may be to believe at this late date, there are still plenty of people who struggle to imagine that Trump is really as bad as his critics say. Having him confess to his nefarious plan on TV helps circumvent that reluctance to believe that, yes, he really is trying to steal the election.

For another thing, postal slowdowns are the sort of thing even low-information voters tend to notice. That, coupled with the fact that the two major postal unions are speaking out about this problem, means that the story about mail slowdowns has a real chance to break into the consciousness of the millions of regular people who typically tune out election coverage. This isn't just a cable news story, but is getting covered in local newspapers and discussed on community forums like NextDoor. This is no longer about "politics," but about the mail — which people rely on for all kinds of personal needs besides voting, especially amid a pandemic.

A lot of Americans, including politically aware liberals who ought to know better, still have an abiding faith that everything is going to be OK and our institutions will save us. But watching the mail slow to a crawl may serve as a cold-shower reminder that the U.S. is not immune to the same kinds of authoritarian machinations that have corrupted other liberal democracies.

As Jamelle Bouie of the New York Times wrote this week, "if you plan to vote against Trump and can take appropriate precautions, then some kind of hand delivery — going to the polls or bringing your mail-in ballot to a 'drop box' — will be the best way to protect your vote from the president's concerted attempt to undermine the election for his benefit."

Right now there are 11 weeks and change to get the word out, thanks to Trump's supervillain-style confession. It's an organizing problem, but not an insurmountable one. There's enough time to educate people on how to get their vote in safely, and to recruit poll workers so that people who have to vote in person (or who choose to) don't have to spend hours standing in line.

The biggest remaining obstacle to convincing people this is really happening is the persistent insistence in some liberal corners that Trump is "too stupid" to pull off a plan this sinister.

It's an argument that's mostly about the ego of those making it, since it's painful to imagine that someone like Trump, who can barely read and who thinks bleach injections might be the miracle cure for COVID-19, could still be clever enough to get one over on us.

I beg my fellow liberals to stop putting their own egos before the need to save our democracy. Trump is a dum-dum, but he doesn't need to be smart to pull off a conspiracy like this. He just needs to have the power (which he does) and the ability to hire people who are smarter than him to work out the logistics (which he has done). This is the same man who managed to cheat both the tax system and the bankruptcy system for decades, not because he's a "stable genius", but because he hired people to do it for him. And that's exactly what is happening here.

For journalists and pundits, the most important thing is to break long-standing habits of viewing everything in electoral politics through the filter of standard horse-race analysis. That stuff just doesn't matter as much in an election where there's only one way Donald Trump can possibly win: by cheating.

Basically all of American political punditry (including myself) is struggling to get our heads around this right now, so I don't mean to single out Sam Stein of the Daily Beast, only to use him as an example. This tweet from Stein on Friday morning captures the way horse-race analysis is inadequate to these circumstances:

How something will "play" with voters doesn't much matter if voters can't vote. And that's what this election will come down to: Whether people get a chance to vote at all.

I want things to go back to normal just as badly as everyone else. I can't wait to return to a country where we can sit around talking about campaign ads and donation numbers and speeches and gaffes and polling data, and not have to worry about things like a stolen election. But we cannot get back to normal by wishful thinking.

The only way we get back to normal is by facing this problem head on: The president is trying to steal the election, he has the means to do it, and he very well may succeed unless he's met with massive, organized resistance.

The only way out of this is to go straight through it. So it's time to open our eyes, get to work and make sure Trump can't use an evil, stupid and blatantly obvious bureaucratic scheme to take away our right to vote.