'They have nowhere to run': Inmate families push for release as California wildfires threaten safety 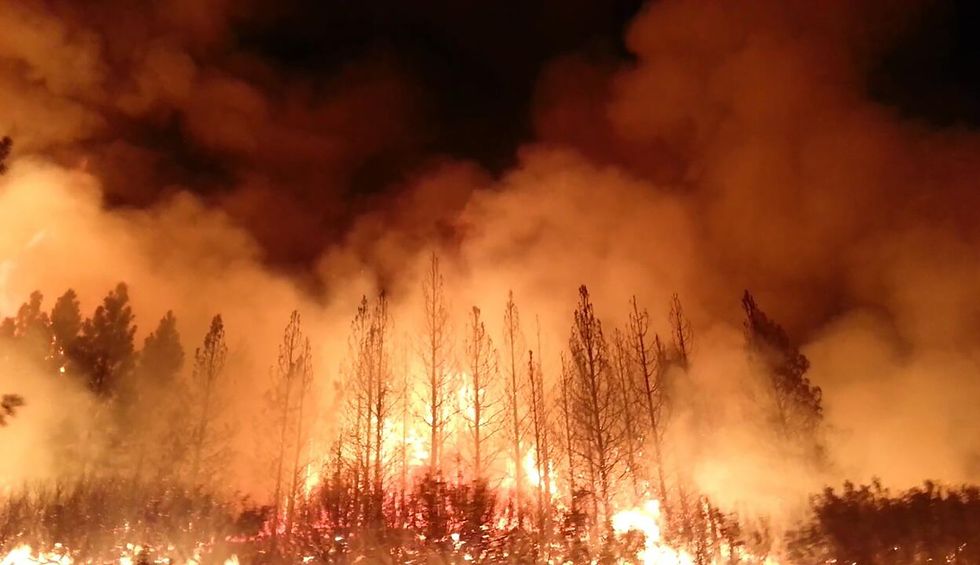 The Rim Fire in the Stanislaus National Forest near in California began on Aug. 17, 2013 and is under investigation. The fire has consumed approximately 149, 780 acres and is 15% contained. U.S. Forest Service photo.
Lisa Newcomb
,
Common Dreams
and
Lisa Newcomb
August 21, 2020

As wildfires rage in California, advocates are pushing for Gov. Gavin Newsom to evacuate prisons in the line of the fires.

The 2020 wildfire season is especially difficult for multiple reasons, including record high temperatures and extreme weather and, of course, Covid-19.

Flames burned through more than 770,000 acres in the Golden State within just one week, the Washington Post reported Friday, leaving five people dead and air quality continually decreasing. Some of the state's prisons are located in areas under evacuation orders, including the California Medical Facility (CMF) and Solano State Prison, which are outside of Vacaville, California.

"They are breathing in fire and smoke, and they have nowhere to run," Sophia Murillo, 39, whose brother is incarcerated at CMF in Vacaville told The Guardian. "Everyone has evacuated but they were left there in prison. Are they going to wait until the last minute to get them out?"

Civil rights advocates have called on the governor to release offenders since the Covid-19 outbreak began ravaging prison populations and staff throughout the United States. Newsom and other governors have released thousands of prisoners in light of the pandemic, but with the fires raging closer and closer to physical prison structures, the calls for more action are growing.

In Vacaville, instead of releasing the nonviolent inmates, officials moved 80 prisoners "to sleep in outdoor tents instead of indoor cells" in a move meant to mitigate the spread of Covid-19 in its facility, The Guardian reported. But the wildfires have damaged air quality, prompting authorities to move the inmates back inside.

"I'm furious at the incompetence and severe inhumanity of this," Kate Chatfield, policy director with the Justice Collaborative, a group that fights mass incarceration, told The Guardian. "Covid is allowed to rage through the prison system and kill people, and then they have tent hospitals set up … and now with wildfires, they take down the tents and put these people back in the Covid-infected building?"

In lieu of evacuating the Solano State Prison, authorities Thursday issued N95 masks to inmates and staff. Aaron Francis, a spokesman for the California Department of Corrections and Rehabilitation (CDCR), told the Guardian Thursday that officials were monitoring the Vacaville fires but that the two prisons were "not in immediate danger" and had no current orders to evacuate.

"It shouldn't come down to [Covid-19], uncontrollable fires, earthquakes, or other major crises for us to start releasing people," Adbab Khan, a formerly incarcerated founder of Re:Store Justice, a prisoner advocacy organization tweeted Friday. "Mass incarceration is the disaster."