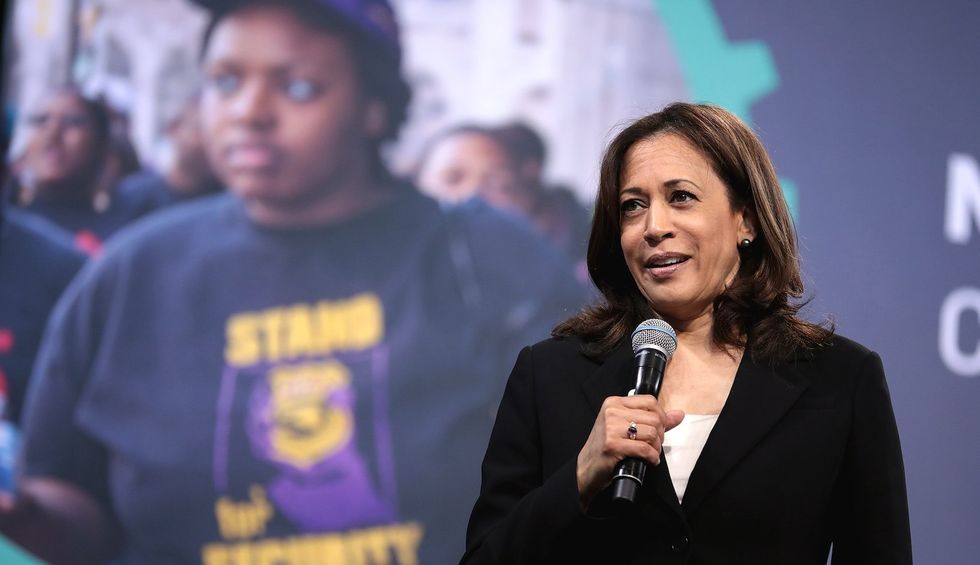 U.S. Senator Kamala Harris speaking with attendees at the 2019 National Forum on Wages and Working People hosted by the Center for the American Progress Action Fund and the SEIU at the Enclave in Las Vegas, Nevada. Credit: Gage Skidmore
Sonali Kolhatkar
and
Independent Media Institute
August 14, 2020Election '20

Joe Biden’s pick of Senator Kamala Harris (D-CA) as his running mate for the 2020 Democratic presidential ticket has generated strong responses. While many Democrats are elated at the idea of seeing a brown-skinned woman of Indian and Jamaican heritage in such a position, progressives are debating one another about Harris’ mixed record on bread-and-butter issues such as criminal justice reform, foreign policy, and health care. In many ways, Harris is not unlike Barack Obama: charismatic, intellectually brilliant, telegenic, and with just the kind of racially diverse background that symbolizes an America that most liberal-minded people want to live in. But far more hopeful than Harris’ achievement is the new crop of staunchly progressive young people of color that is chipping away at the Democratic Party establishment through electoral politics.

In Harris and Obama we find the sort of “blank slate” figures on whom liberals can project their hopes and dreams. Both figures are adept politicians who are willing to be swayed on issues—a critical aspect of the executive branch—and who have a strong veneer of progressivism about them. The reason why there is a robust debate about whether or not Harris is truly progressive is because she has been tough to pin down.

As California’s attorney general, Harris was hardly the “progressive prosecutor” she claimed to be later on. But when she ran for president, her platform included “ending mass incarceration,” including ending the “war on drugs.” In fact, the New York Times pointed out that, “Ms. Harris sometimes struggled to clearly define her stances during her unsuccessful presidential campaign. But in recent months, she has emerged as a leading voice on racial justice and inequality.” It is more than likely that Harris’ evolution is based on the changing tide in American attitudes toward race and policing. And while that is indeed what we want in a politician, it is apparent that Harris has been a cautious player.

On the one hand it shows that she—and by extension Biden too—is willing to grow and evolve with the times. On the other hand, a Biden-Harris administration is likely to be to the right of their own campaign platform once in office. But framed against the prospect of four more years of Donald Trump’s administration, such conundrums are quite welcome. While Biden did not choose a strong progressive such as Representative Karen Bass (D-CA) or Senator Elizabeth Warren (D-MA), he could have easily picked a running mate much more to the right than Harris, such as Susan Rice. And a Biden-Rice ticket would have still been far more preferable to the horror show that Trump unleashes on a daily basis. Judging by the unimaginably low bar that Trump has created for the White House, nearly anybody would be preferable to the incumbent. While a return to the Obama years (which is essentially what Biden promises) would be a massive step up from Trump, progressives can and should aspire for even more.

While many supporters of Senator Bernie Sanders (I-VT) were stung by his 2016 and 2020 losses in the race for the Democratic presidential nomination, there is reason to be very optimistic. In fact, there are many reasons, and some of their names are Alexandria Ocasio-Cortez, Ilhan Omar, Ayanna Pressley, Rashida Tlaib, Jamaal Bowman, and Cori Bush. The so-called “squad” of four progressive young women of color who first emerged into electoral politics in 2018 beating Republicans and centrist Democrats have all easily beaten their primary challengers this year and are sailing toward reelection in November.

Ocasio-Cortez, whose eloquence and strong progressive principles have earned her national admiration, remarked on Twitter that the primary challenges that she, Omar, and Tlaib faced from their own party cost, “Tens of millions in big money… to unseat 3 of us as ‘safe’ Dems – almost unheard of.” She explained that, “This is what happens [when] you deeply challenge systems of power and corruption.” Ultimately, “the people triumphed.”

Most importantly, the squad is growing. Bowman and Bush, who are part of the latest crop of young progressives of color to oust powerful Democrats in primary challenges, are likely to win their seats in November in their strongly Democratic districts. Together with veteran progressives of color in Congress such as Maxine Waters, Barbara Lee, Karen Bass, and newer stalwarts like Pramila Jayapal and Ro Khanna, a powerful coalition is set to emerge and change American politics under a potential Biden-Harris presidency. Like Harris, these elected officials look like the diverse America that Trump and his supporters despise. Unlike Harris, they have a clear progressive agenda that is not debatable.

As an Indian woman, I am expected to rejoice in Harris’ political stardom. And while there is a modicum of excitement in seeing a woman whose mother could have been one of my own relatives, it is the sort of limited pride one feels at seeing Indian-origin actors Mindy Kaling or Aziz Ansari on-screen playing roles that are palatable to white audiences. While I may share Harris’ heritage, I identify far more strongly with the politics of the “squad” and their ilk.

For years, the corporate media have defined the vague notion of “electability,” claiming that in order to win over a broad swath of the American electorate, political candidates need to appease conservatives and cautiously liberal-minded independents. After Biden’s announcement, CNN gushed, “The Kamala Harris pick isn’t about 2020. It’s about the future.” Media outlets like CNN and the New York Times who would like Harris to represent America’s future rather than figures like Ocasio-Cortez have unabashedly put their thumb on the scale of presidential races. They have shaped our national discourse to ensure there are no serious challenges to the prevailing established order. In politicians like Biden, Harris, and Obama, they have found satisfaction and stability. But in local races where the corporate media either lack the resources to set the agenda or have been caught unaware after failing to notice an upset-in-the-making, there has been real, small-d democratic progress.

No longer do progressives have to accept older white progressives as their only representation in the halls of power. The nation is getting younger, more diverse, and more keen on transformative politics. A new crop of elected officials is rising who don’t look or sound like traditional politicians. They look and sound like America. And in the long term, that’s even more exciting than Biden-Harris 2020.