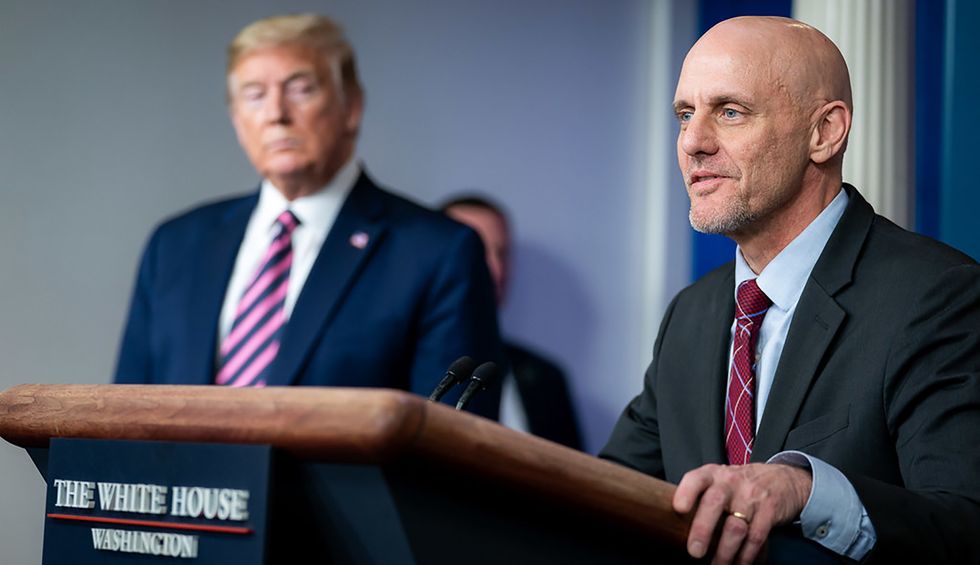 The New York Times has a long look questioning whether Food and Drug Administration head Stephen Hahn is being forced into giving the nation subpar advice on the demand of the anti-science, anti-reality narcissistic idiot manchild posing as the current president. It is full of the usual back and forth, both-siding quotes while laying out reams of evidence that actually this is not a question at all. The plain history shows that Dr. Hahn has absolutely been mealymouthing FDA pandemic advice to dodge contradicting Donald Trump's most egregiously ignorant and magic-minded proclamations. It's the sort of piece where you get the subject, Hahn, assuring the reporter that he is absolutely not feeling "squeezed" before the reporter casually throws in:

"On the line as he spoke was Michael Caputo, a deputy to Dr. Hahn’s boss, Alex M. Azar II, the secretary of the Department of Health and Human Services. [...] Dr. Hahn is not allowed to speak to the press without Mr. Caputo or another official on the phone."

There you go, America. Question answered. The head of the Food and Drug Administration is forbidden from talking to the press about the pandemic, period, unless an administration minder is present.

Another of global authoritarianism's most consistent policies gets plunked down into the federal government, and we learn of it in a piece questioning whether everything is fine or is maybe something odd and disturbing going on here.

While the FDA gives rush approval to a supposed Trump miracle drug, sans evidence, only to have to warn later that oops it may turn out that the drug not only doesn't work but may result in the dangerous side effects already known and printed on the packaging.

Oh, and we also learn that Hahn was discouraged from reaching out to private companies to develop COVID-19 tests back in January, according to four administration sources. That was back when the Trump administration, meaning Donald, was absolutely determined to ignore the pandemic away from the United States and absolutely did not want health officials giving dire warnings or taking drastic actions to actually prepare for the pandemic when it arrived.

Don't worry, though. Trump's Health and Human Services head Alex Azar said that never happened. Those other four sources must have imagined it.

We really are just unimaginably slow on the draw, here. There are 160,000 Americans dead, and it's going to be next to impossible to limit it to anything else than a quarter million dead by the end of the year. And the most aggressive action to date by the Trump clan is to make sure minders are minding any federal expert whose expertise might publicly contradict whatever Typhoid Hitler's fevered brain has pushed out his mouth on any particular morning. Is this unusual? Yeah, it's pretty damn unusual. Is this damaging the nation's response to a pandemic? Look around the planet: It's the defining feature of our nation's response to the pandemic.

We are supposed to feel sympathy for Dr. Hahn, because if he wants to retain his position he is absolutely forbidden from getting on Donald Trump's bad side—and contradicting Donald Trump under any circumstances will immediately put him on Trump's bad side. We are supposed to be begrudgingly grateful that Dr. Hahn and others are doing their best to dodge massive, murderous incompetence to keep more Americans alive than Trump's core team have shown interest in, because if they resigned their posts in disgust Trump, Kushner, Meadows and the rest would simply ignore whatever laws were necessary to put a loyalist in with no such moral qualms.

We have to phrase all of this delicately, with a touch of both sides do it and a large dose of yes, this is all unusual in the extreme but far be it from us to say this is any better or worse than the old way of running the country, because doing otherwise would send Americans into a panic. It would cause politicians supporting the New Way to get very, very angry.

It may be brazenly obvious that Trump's incompetence is killing people and his staff is primarily devoted to making sure nobody in the federal government suggests anything better, but there are still no editorial pages demanding he step down. None asking that the 25th Amendment be invoked despite his obvious forays into delusion.

Nothing about this is normal. A great deal of it was previously presumed to be illegal. There is an overwhelming push to normalize it down to mere partisan controversy, though, so nobody has to too deeply consider the underlying implications.