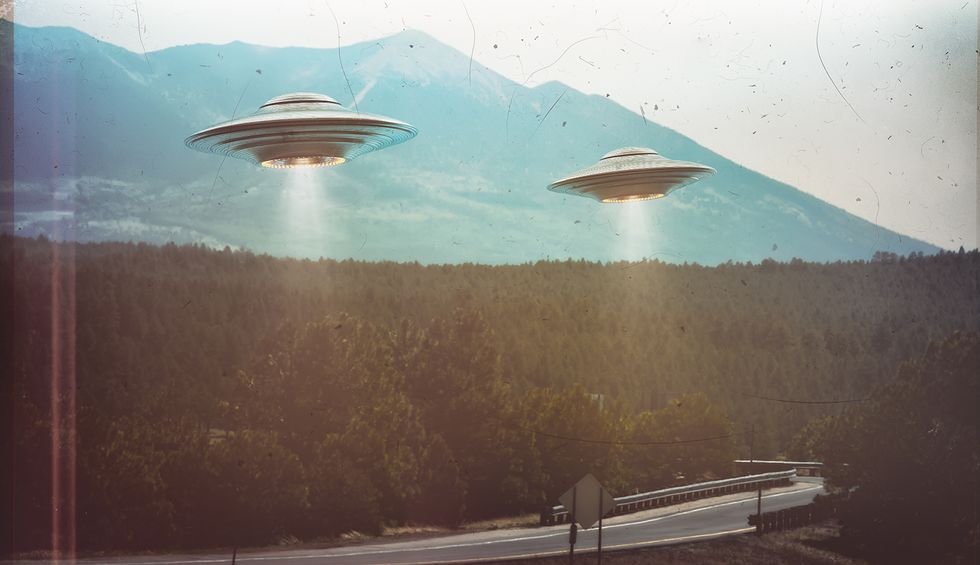 The Pentagon announced Thursday that it is creating a task force to investigate UFO sightings. Though the notion that the military is investigating UFOs sounds like a fringe conspiracy theorist's ultimate redemption, the military's actions are far from preposterous. That's because their own trusted soldiers have credibly encountered UFOs while piloting military aircraft.

The Pentagon's footage from these sightings, which has been made public, depicts objects zooming quickly through the sky, as recorded by military pilots. Though these objects fit the technical definition of a UFO — meaning an unidentified flying object — they may not adhere to the folk understanding of "UFO" as synonymous with an extraterrestrial spacecraft. That's because there isn't exactly any evidence that these objects are of extraterrestrial origin, or that they defy any existing laws of physics that might hint at their development by a more scientifically advanced species.

"To understand the videos, all you need to do is ask any fighter pilot familiar with the FLIR camera system," Brian Dunning, a professional scientific skeptic and podcaster, told Salon by email. "What looks like great speed and wild maneuvers is just a common optical illusion combined with the effects of the FLIR's gimbal and glare filter." FLIR cameras, short for forward-looking infrared cameras, are capable of seeing slightly into the infrared spectrum, meaning that heat sources light up on FLIR camera footage.

Dunning zeroed in on a released video that appears to show a bat-winged shaped craft, noting that "the object you're seeing is a single point of heat from an unidentified plane, probably a distant commercial jet, flying away from the F-18. The camera is looking out the side of the F-18 which is speeding past nearby clouds, making the object appear to be moving relative to the clouds."

He added, "Its bat-wing shape is how the FLIR's glare filter always depicts single bright points (there are plenty of examples of this on YouTube), and whenever the object appears to turn, this is simply the FLIRs gimbal rotating to keep the target in view as the F-18 maneuvers. The other videos also have similarly prosaic explanations."

Timothy Caulfield, a law professor at the University of Alberta who also hosts a TV series that debunks pseudoscience (titled "A User's Guide to Cheating Death"), explained to Salon that there are a number of potentially innocuous explanations — many of them involving military or other highly secretive scientific experiments — that get ignored due to sensationalism.

"I get why people are fascinated by this topic. It's exciting, it's intriguing, it's mysterious," Caulfield said. "But the idea that these things are UFOs and alien sightings, and that there is alien material left on our planet, is scientifically implausible and highly unlikely. It's an Occam's Razor story. I think there is probably a more straightforward explanation, but we will just never know with the deep uncertainty. People want answers."

He drew particular attention to how the pilots that spotted these UFOs may have inadvertently fanned the flames of conspiracy theorists.

"When people look at those kinds of videos and the reaction of the pilots, for example, I think that's often also used to give them more credibility with these expert pilots, often military pilots, commenting on the behavior of the shifts," Caulfield explained. "I'm not a physicist, I'm not an engineer. I can understand what people are intrigued. They don't know what this object is and it's moving in a manner that seems impossible given our current technology."

Alexander Wendt, an international relations professor at Ohio State University who has become a prominent amateur ufologist, pointed to the reactions of the military pilots as a sign that these new UFOs should be taken seriously.

"I challenge anybody to do better than the Navy to explain what's in those videos. If the Navy couldn't do it..." Wendt told Salon, before adding that "they had every reason to want this off their plate."

As Wendt pointed out, "I think what's unique about these Navy videos is that the whole issue arose from the pilots... I think the upset pilots is really a key thing. These guys are the experts on what's in the sky. They have thousands of hours of experience flying up there. You see some of the interviews with these pilots and they think something is going on, and they were the ones that pushed this whole issue to the front."

"If you look at the data on public opinion on this, it is really sort of incredible," Wood explained. (A Gallup poll last year found that 33 percent of Americans believe that some UFO sightings were caused by alien visitation; a YouGov poll last month found that 56 percent of Americans believe that the government would hide UFO evidence from the public.) "The American public fascination with UFOs is one of the very durable conspiracy theories in the American public's imagination. Most conspiracy theories may become popular and then quiet quickly — for instance, the Barack Obama was born in Kenya theory, the American government planned the 9/11 terrorist attack theory. The UFO conspiracy theory is one of those that just sort of stuck around."

Dunning was quite cynical about the reasons for people believing in UFOs.

He added, "Humans are hardwired for anecdotal thinking. Our brains gravitate toward the simple and the desirable, and away from the complicated and the boring. The people in the business of selling TV programming are well aware of this, and that's why we see UFOs, ghosts, psychics, and miracle cures dominating pop culture."

Many famous people claim to have encountered either UFOs or aliens, from singers Elvis Presley and Blink-182's Tom DeLonge and President Jimmy Carter. They were able to have successful careers despite the stigma associated with such an alleged experience, though many other believers were not.

Earlier this year, the TV series "Unsolved Mysteries" devoted an episode to a group of people from a small town in western Massachusetts who claim they encountered a UFO in 1969. They described being socially rejected, viciously bullied, and in one case even harassed to the point where they moved away. it makes sense why they wouldn't go to the police or the local press at the time with their story. Many other reports of UFO sightings and encounters follow the same pattern — those who come forward suffer for doing so. As one of the people in the episode puts it, the town devolved from "Norman Rockwell to Salvador Dali" as public opinion and un-visited citizens turned against the purported witnesses.