Sean Hannity secretly believes Trump is 'crazy' — and gets treated 'like Melania': book 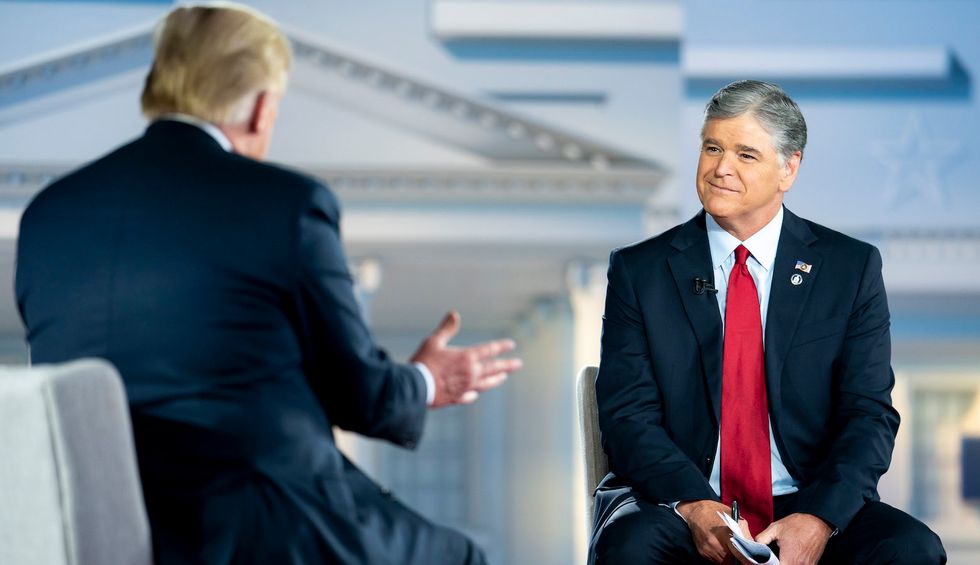 Sean Hannity is among President Donald Trump’s most strident sycophants at Fox News, angrily lambasting anyone who questions anything that Trump says or does. But according to CNN reporter Brian Stelter’s forthcoming book, “Hoax: Donald Trump, Fox News, and the Dangerous Distortion of Truth,” Hannity has privately told colleagues that he believes Trump is “batshit crazy.”

Vanity Fair has published an except from Stelter’s book, which contains interviews with Hannity associates who spoke on condition of anonymity. In that except, Stelter quotes a Hannity associate as saying that the Fox News host “would tell you, off-off-off the record, that Trump is a batshit crazy person.” And a friend of Hannity, similarly, told Stelter, “Hannity has said to me more than once, ‘He’s crazy.’”

But Hannity’s commitment to GOP priorities and to his own business model meant he could never say any of this publicly. If one of his friends went on the record quoting Hannity questioning Trump’s mental fitness, that would be the end of the friendship.

The excerpt describes how close Hannity has become to Trump, and according to Stelter, the relationship has become downright stressful for Hannity. Stelter writes that Hannity has “counseled Trump at all hours of the day” and is treated “like Melania” by the president — “Melania” as in First Lady Melania Trump. The excerpt alleges that “Trump-related stress” might be the reason why Hannity “gained weight and vaped incessantly” and told a colleague: “If you were hearing what I’m hearing, you’d be vaping too.”

Hannity swore that no one knew the truth about his relationship with Trump. He lashed out at people, like yours truly, who reported on it. And he certainly didn’t disclose his role in Trumpworld the way a media ethicist would recommend. But once in a while the curtain slipped and his own colleagues pointed out the extraordinary position he held. As the coronavirus crisis deepened in March, Geraldo Rivera said to Hannity on the air, “I want you to tell the president, when you talk to him tonight, that Geraldo says ‘Mr. President, for the good of the nation, stop shaking hands.’”

Stelter writes that Hannity’s “friends told me he was burnt out for long stretches of the Trump presidency. Being the president’s ‘shadow chief of staff,’ as he was known around the White House, could be a thrill, but it was also a serious burden…. Hannity chose this life; so, no one felt sorry for him. But the stress took its toll.”