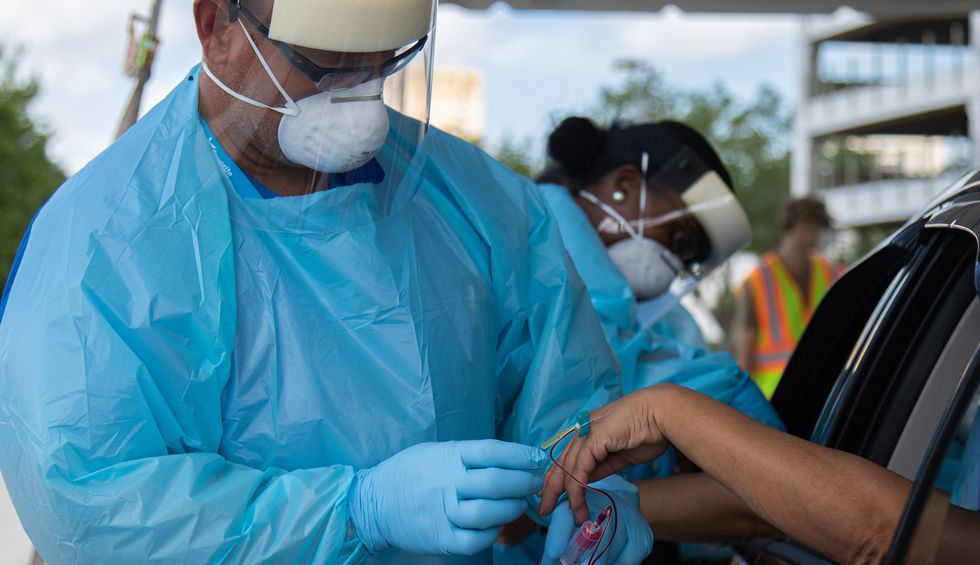 Nurses working alongside Airmen with the 125th Air Expeditionary Squadron begin antibody testing at the Orange County Convention Center Community Based Testing Site on May 9, 2020. The nurses are collecting blood samples to test for antibodies against COVID-19 as the National Guard provides logistical and traffic control support for the Florida Department of Health. (Photo by Pfc. Orion Oettel)
Alex Henderson
August 17, 2020

President Donald Trump’s reelection strategy continues to be a rally-the-base approach, and millions of diehard MAGA voters have not been swayed by the coronavirus pandemic. But journalist Philip Bump, in the Washington Post, notes that support for Trump is not universal among Republican voters — and that according to a new Post/ABC News poll, one in six registered Republicans who are worried about being infected with coronavirus plan to vote for former Vice President Joe Biden.

“About half of Republicans and Republican-leaning independents say they’re worried that they or their families might contract the coronavirus — and a fifth of that group say they plan to vote for Biden,” Bump explains. “Looking only at registered Republican voters, the figure is 1 in 6.”

Not surprisingly, the poll found that Trump enjoys his strongest support among Republicans. But the Republicans who are the most worried about coronavirus, according to Bump, are the most likely to cross party lines and vote for Biden.