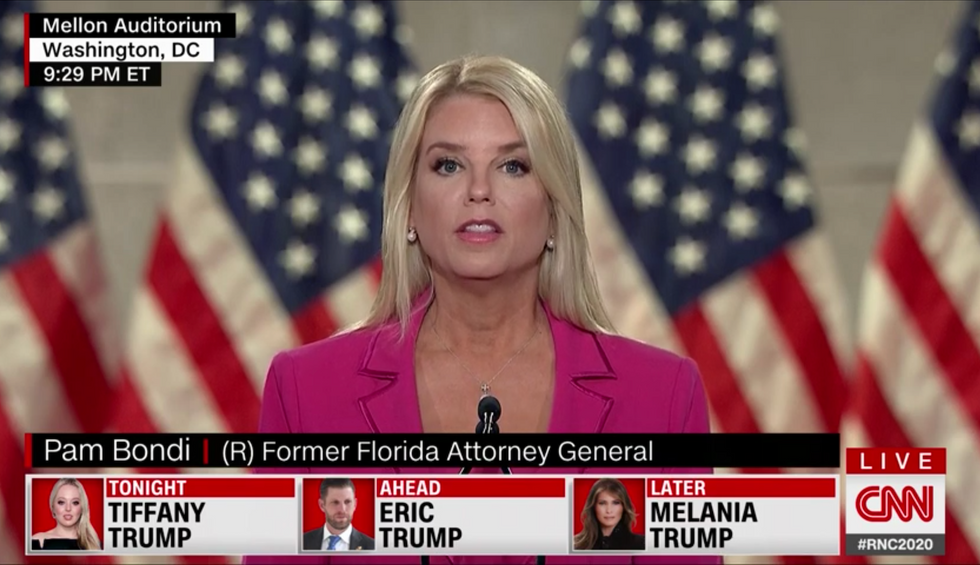 You might have thought it would be hard to outdo the absurdity of Kimberly Guilfoyle screaming at the top of her lungs to an empty auditorium on the opening night of the Republican National Convention. But on Tuesday, former Florida Attorney General Pam Bondi reached new heights of absurdity in the second night of the event in a speech filled with unfettered hypocrisy.

Bondi returned to a theme of the Trump campaign that has largely been absent from the convention thus far: Joe Biden's supposed corruption. As one of Trump's lawyers during the impeachment trial, she tried to press the case against Biden at the center of the president's high crimes. Trump tried to get Ukraine to investigate allegations that Biden, as vice president, corruptly sought to have a Ukrainian prosecutor fired to protect his son, who was working on the board of the energy company Burisma in the region.

The allegations against the Biden's have been repeatedly debunked. It was Trump's demand that Ukraine investigate the matter that was deemed impeachable by the Democratic-led House of Representatives. Even one Senate Republican, Mitt Romney, agreed.

Nevertheless, Bondi had the gall to stand up at the RNC and deliver attacks on Biden that have been thoroughly debunked and scrutinized during the impeachment trial. Much of the information used to attack Biden was false Russian propaganda.

It's even worse than that, though. While she accused the Bidens of corruption, she stands credibly accused of a stark act of corruption herself — one that happens to involve Trump.

Here's what we know: In 2013, Trump donated $25,000 to Bondi's campaign as attorney general. Subsequently, she decided not to join a lawsuit filed by multiple states against Trump University, despite the fact that Florida residents had brought complaints to her office. It also turned out that the donation was illegal because the Trump Foundation cannot donate to political candidates; Trump said he paid $2,500 to the IRS to make up for the error. Trump would later settle that case brought by other states for $25 million.

It is, at the very best, a clear case of the appearance of corruption. It was certainly illegal. It may, in fact, have been the pure pay-for-play, quid pro quo, that it appears to have been. But regardless, the confirmed facts of the matter should be enough to make Bondi ashamed to associate with Trump ever again, and vice versa. Yet both have proved shameless.

But Bondi's performance is worse still. Because while she was railing against Biden for supposedly acting improperly with foreign governments, she has recently registered as a foreign agent of Qatar, a government that has been caught in its own corruption scandals. Under normal circumstances, a foreign agent working so closely for the president would be treated as a major scandal.

“I fought corruption and I know what it looks like, whether it’s done by people wearing pinstripe suits or orange jumpsuits,” she said, without a sense of irony. “But, when you look at Biden's 47-year career in politics, the people who benefited are his family members, not the American people.”

This line was particularly egregious, given the fact that Trump's family members have been deeply involved in his administration. His daughter Ivanka Trump and son-in-law Jared Kushner have high-ranking White House jobs, despite not having any qualifications for the roles. They have made millions on the side while serving in the administration. And while Donald Trump Jr. and Eric Trump were supposedly going to run the Trump Organization separately so as to avoid any conflicts of interest for the president, they have become prominent spokespeople for the Trump campaign. Both have had speaking roles at the RNC; Eric appeared shortly after Bondi.

And on top of all that, the president has been widely denounced for his use of federal government lands and buildings in service of the convention, blurring the lines between the administration and his campaign in a way that likely violates the Hatch Act.

So for Bondi to stand before the GOP and American people and attack Biden with charges of corruption, exploiting his government position, foreign entanglements, and nepotism, while ignoring much more egregious evidence implicating herself and the Trumps, was a startling act chutzpah.