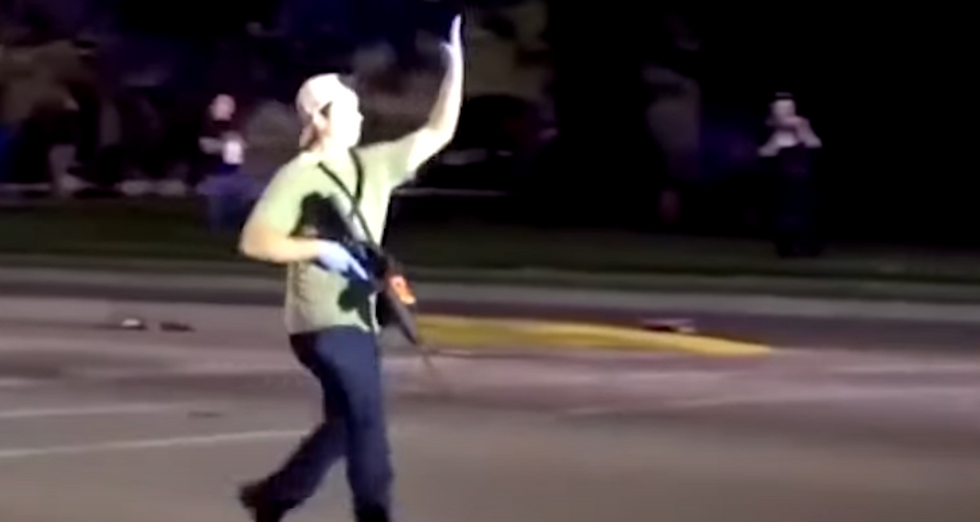 In Kenosha, Wisconsin, large protests have followed the shooting of Jacob Blake — a Black man who was shot seven times in the back by police and is now paralyzed. Two people were shot and killed during one of the protests on Tuesday night, August 25, and the New York Times has analyzed and tracked the activities of the suspect who has been arrested in connection with the shootings: 17-year-old Illinois resident Kyle Rittenhouse — who, according to the Times, was a supporter of the Blue Lives Matter movement.

The Times journalists report that Rittenhouse was “carrying a military-style semi-automatic rifle” at the protest and has been charged with “first-degree intentional homicide in connection with shootings that left two people dead on Tuesday night.” And they explain that the Times “analyzed hours of footage to track Mr. Rittenhouse’s movements in the moments leading up to and during the shootings.”

According to the Times reporters, “Multiple posts on his social media accounts proclaim support for pro-police causes like the Blue Lives Matter movement and Humanize the Badge, a nonprofit that he ran a Facebook fundraiser for on his 16th birthday. His posts also suggest a strong affinity for guns, with videos showing Mr. Rittenhouse taking backyard target practice, posing with guns and assembling an assault rifle.”

The Times has posted a collage of videos of Rittenhouse that were taken before the shootings. In the footage, Rittenhouse is seen in front of a vehicle dealership in Kenosha, where he is holding a semi-automatic weapon and saying, “So, people are getting injured. And our job is to protect this business.”

The Times reporters explain, “About 15 minutes before the first shooting, police officers drive past Mr. Rittenhouse and the other armed civilians who claim to be protecting the dealership and offer water out of appreciation. Mr. Rittenhouse walks up to a police vehicle carrying his rifle and talks with the officers. He eventually leaves the dealership and is barred by the police from returning. Six minutes later, footage shows Mr. Rittenhouse being chased by an unknown group of people into the parking lot of another dealership several blocks away.”

After the two shootings, Kenosha officials announced a  7 p.m. curfew for the Wisconsin city. Wisconsin Gov. Tony Evers, a Democrat, has announced that he is sending hundreds of additional Wisconsin National Guard members to Kenosha.