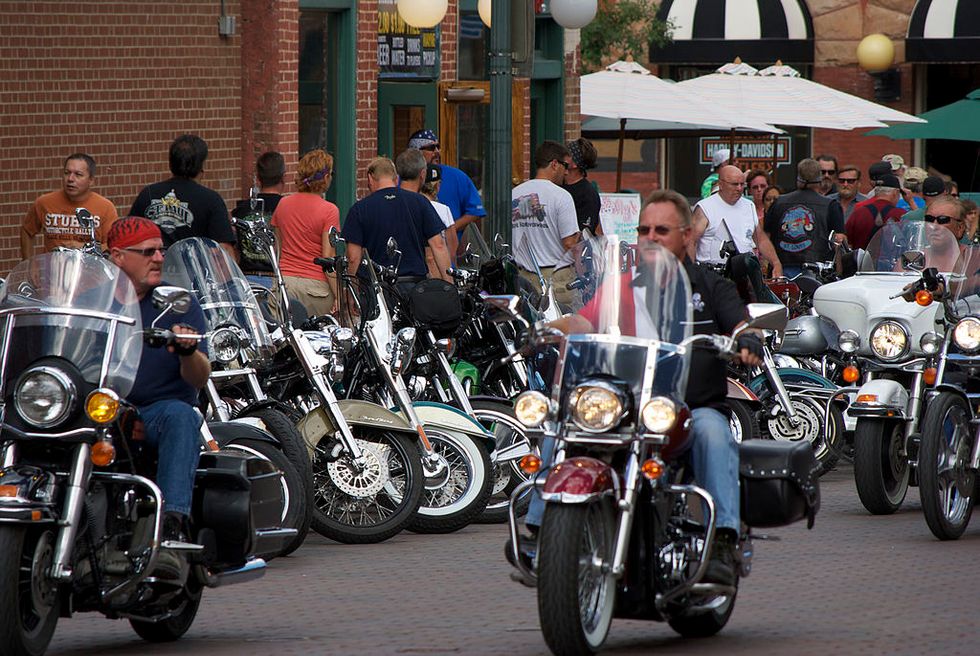 It would be too much to expect the millions of Americans who choose to celebrate their personal identity with intentionally loud and purposely obnoxious, high-polluting machines, operated at speeds in excess of 70 mph on our nation’s highways, with zero protection between themselves and the roadway, all to care equally about potentially infecting other people with an invisible virus.

Still, for at least a discrete subgroup of those folks who claim the “individual freedom” to face a fatality risk 26 times the rate of other motorists, attendance at the annual Sturgis motorcycle rally in Sturgis, South Dakota this year in the midst of the deadliest global pandemic in over a century, signifies a quantum leap of sorts in both irresponsibility and crass disregard not only for their own lives, but for the rest of the people in this country as well.

As reported by Michael Daly, special correspondent to the Daily Beast, starting on Friday, and for the next nine days, nearly a quarter million motorcycle aficionados, many driving thousands of miles from states all across the country, will congregate, backslapping, hugging, drinking, smoking, spitting, shouting, and expelling varied forms of bodily fluids from their orifices in a tiny South Dakota town, before returning home to spread whatever it is they might catch there to those who they interact with—stopping to sleep, eat, and urinate along the way for good measure.

“Nobody is social distancing and none of them are wearing masks,” local psychologist Michael Fellner told The Daily Beast. “None.

The attendees for this event have come to Sturgis with the encouragement of South Dakota’s Republican governor, Kristi Noem, an acolyte of Donald Trump who has taken a highly visible, negative view towards any means of self-protection during the COVID-19 pandemic. For example, Noem has encouraged parents to send their small children back into public schools without masks, which she claims will increase, rather than decrease, the spread of the SARS-CoV-2 virus. Following Trump’s lead, Noem has also advocated and commissioned her state to engage in trials of the anti-malarial drug hydroxychloroquine as a treatment for COVID-19 infections, despite guidance from the FDA warning against its use.

The rally is proceeding in large part to boost the South Dakota economy, as it normally generates several hundred millions of dollars in revenue. As reported by Daly, it is also proceeding despite the opposition of the majority of actual Sturgis residents. According to the The New York Times, over 60% of the town’s 7,000 citizens supported postponing the event. But the same residents believed they could do little to stop it, since the rally itself occurs on state-licensed property and the state, through Noem, has already sanctioned it. A phalanx of businesses, advertisers and “people outside the city,” according to the The Times, pressured the town to proceed, and the town’s City Council on June 15th voted 8-1 to go ahead with the rally, although city-sponsored events related to it were canceled.

As Daly reports, many of these attendee bikers have already expressed their disdain for preventive measures as well as the seriousness of the pandemic itself on social media.

“On my way I ain’t scared of the media flue or as we call it round here election flue see ya soon sd,” J.F. Watson of Ohio said.

The Sturgis rally is being reported as the largest public gathering since the COVID-19 pandemic began. But what particularly distinguishes it is the widespread disregard of the participants for preventative health measures to ward off potential infection, and the risk of broader spread of the virus once participants leave Sturgis. Reuters published an article on Friday describing the attendees as they arrive, through the eyes of Meade County Sheriff, Rob Merwin.

The sheriff's office overlooks Sturgis' Main Street and from Merwin's vantage point, he saw few precautions taken as the town began to fill up Thursday evening.

In fact, it appears that many of them do know “what they’re getting into.” It’s just that they don’t particularly care. Most of these people have been fed six months of science denial and propaganda about the COVID-19 virus, by everyone from Donald Trump to Kristi Noem, down to their enablers on Fox News, all of it geared to stoke their delusions about how their “personal freedom” is being taken away by wearing masks, avoiding large gatherings and practicing social distancing. In Sturgis what we are witnessing is the apotheosis of all that, a toxic blend of ignorance, insouciance, and arrogance in a small but significant subset population that prides itself on being “set apart” from the rest of society.

The problem is that in the context of an equal-opportunity pandemic, no one is set apart. Just as many of the attendees are likely to arrive already infected, and are likely to infect others while there, once they leave for home and parts unknown, millions of other Americans will be forced to deal with the health consequences of their “choices.”

So much for that “freedom.”