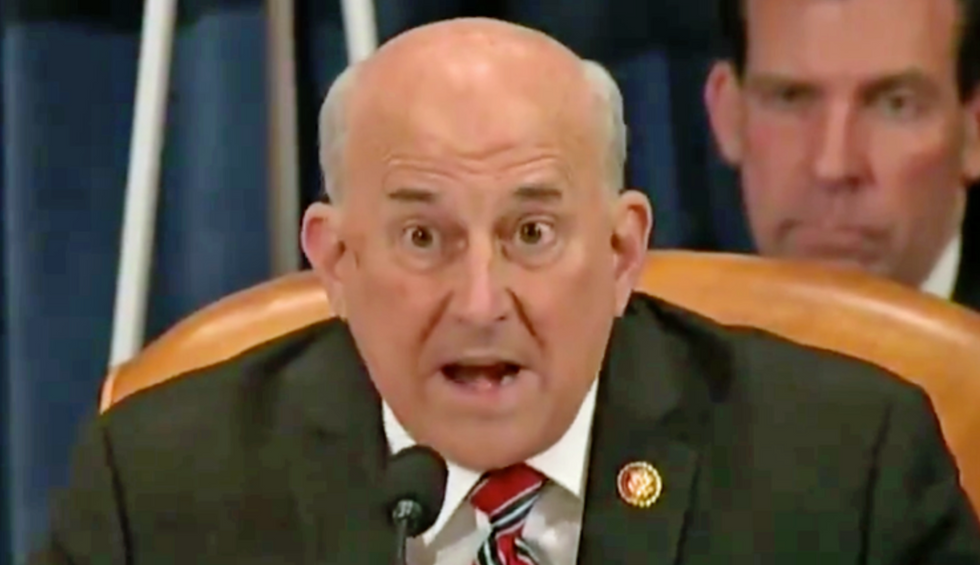 A few years ago, while I was president of the Writers Guild of America, East, several union members and I went down to Washington to hold a midday briefing on Capitol Hill about net neutrality.

We were in the House Judiciary Committee hearing room in the Rayburn office building. To lure an audience, on a table at the back, we provided a pile of free paper bag lunches for the small crowd. As usual with this sort of event, most of the people who showed up were hungry young congressional staffers but at one point, a colleague poked me in the ribs, pointed and said, "Look—an actual congressman is grabbing a couple of our lunches!"

Yes, Louie Gohmert, the man the Lincoln Project's Steve Schmidt described just this week as "America's dumbest and craziest congressman." The man who claimed the Obama White House had been infiltrated by "many Muslim Brotherhood members" and once tried to nominate as Speaker of the House a man who had just been beaten for reelection. The man who once declared that same-sex marriage caused Noah's flood and that Charlottesville was a "false flag" operation, with people posing as KKK and Black Lives Matter protesters bused in to make trouble. The man who outed the alleged whistleblower during the impeachment proceedings and voted against a Federal anti-lynching law. And on and on…

In the latest chapter of the ongoing saga of East Texas US Rep. Gohmert holding onto his title as the biggest blockhead in Congress (admittedly, there are a lot of contenders), it was revealed that Gohmert tested positive for COVID-19 after weeks of walking around the capitol and congressional offices without a mask. His condition was caught when he was prescreened by the White House as he was getting ready to fly to West Texas with Donald Trump on Air Force One. Who knows how long he'd been walking the halls and corridors spreading contagion along with his own innate cheer and charm?

Previously, he had claimed that he didn't needed to wear a mask because he was being tested on a regular basis. The day before his diagnosis was announced, he was sitting maskless at the House Judiciary Committee hearing with Attorney General William Barr and at one point was seen leaving a nearby men's room with Barr. There was minimal social distancing and Barr wasn't wearing a mask, either.

Upon receiving word of Gohmert's positive test, the following occurred:

This all would be funny in a sardonic, blackly humorous sort of way if not for the fact that Gohmert consistently has spread misinformation about the virus, and hails from a state where the governor and other elected Republican officials were in denial about COVID, reopened too early and as of this writing have 436,402 confirmed coronavirus cases and 7,107 deaths.

And then there's this: last Sunday, competing demonstrations were held at a public square in downtown Tyler, Texas, part of Gohmert's district. One was a pro-police protest—with MAGA hats, Trump 2020 signs and tee shirts and at least one Confederate flag—the other a smaller counterprotest in support of Gohmert's Democratic opponent for the House and against the presence of anonymous Federal law enforcement in Portland, Oregon.

Earlier in the week, Esquire's Charlie Pierce gave a heads up as to what happened next. Here's part of an account, as reported by a local news site, The Gilmer Mirror:

Miller was attacked by at least four protesters, some of whom were armed, and sustained blows to the head and other parts of his body, as well as a large gash under his eye. The incident occurred as officers from the Tyler Police Department drove around the square idly, waving at the Blue Lives Matter counter-protesters who had come to support Gilbert's opponent.

Gohmert's supporters disrupted the rally by shouting, 'Louie! Louie! Louie!' repeatedly, including while Miller was being brutally attacked.

A police report has been filed with Tyler police, who showed up on the square after the violence was well-underway.

Tyler police say their investigation is ongoing. But when Louie Gohmert was asked about the incident, he refused to condemn the attack and characteristically, turned the situation on its head. He responded (in part), "[W]hat came to my mind is the violence Democrat leaders paid to create at Trump campaign events in 2016, followed by Democrats then claiming Donald Trump incited violence. They created the mess, then blamed candidate Trump. There are Democrats and Marxists doing the same thing this year, as well.

… It is unfortunate that extremists wanted to bring the violent protests and riots we've seen around the country to our peaceable area here in East Texas. …The goal of the Marxist groups is to destroy this great nation through violence and intimidation, which calls into question why anyone of sound mind would want to support and replicate these violent activities in Tyler. That comes from either terrible judgment or an intent to use Bolshevik or Mao tactics.

Contrast that inflammatory lying nonsense and all his other bloviating rhetoric with the final words left us on Thursday by another congressman, the late John Lewis, laid to rest in Atlanta with bouquets of righteous eloquence from friends and colleagues, among them House Speaker Nancy Pelosi and former Presidents Bush, Clinton and Obama.

"Democracy is not a state," Rep. Lewis wrote in his farewell. "It is an act, and each generation must do its part to help build what we called the Beloved Community, a nation and world society at peace with itself… In my life I have done all I can to demonstrate that the way of peace, the way of love and nonviolence is the more excellent way. Now it is your turn to let freedom ring."

We can make fun of Louie Gohmert; he's an easy target. But for all the buffoonery, he's a very dangerous fellow, an enabler of Donald Trump and the forces that seek to undermine and destroy everything that John Lewis and the speakers at his funeral represent, especially true freedom and patriotism, unity and equal justice under the law.

You can go ahead and laugh at Louie Gohmert but remember, he represents the views of far too many of our fellow Americans—and he's probably heading for re-election to his eighth term in the House.