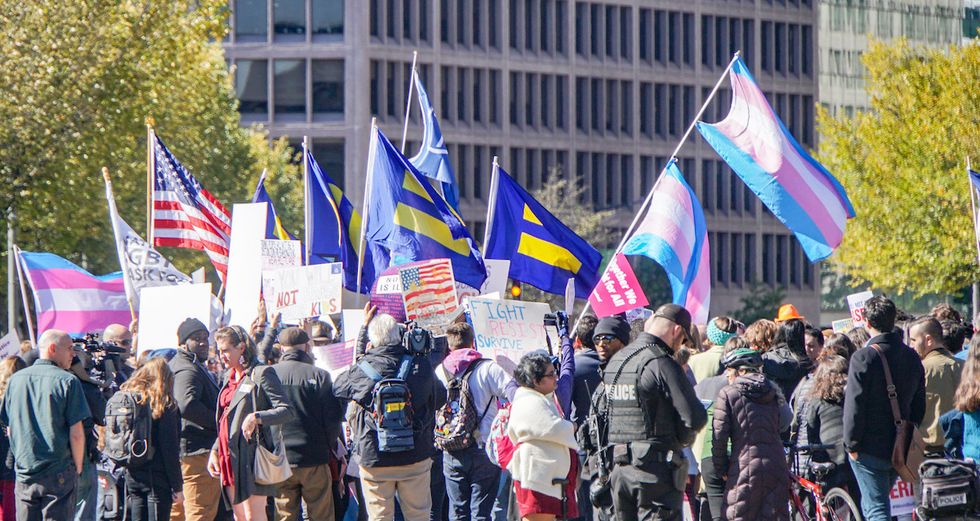 President Trump has once again taken aim at transgender rights - join the National Center for Transgender Equality and partner organizations in front of the White House to tell the administration that we #WontBeErased. We will meet at the corner of Pennsylvania Ave. and Jackson Pl., near the Rochambeau statue. Ted Eytan https://creativecommons.org/licenses/by-sa/2.0/
Gabe Ortiz
and
Daily Kos
August 19, 2020LGBTQ

The Trump administration’s regulation that would have eliminated protections in Obamacare for transgender people has been blocked for now by a federal judge, just hours before it was set to go into effect. NBC News reports the judge “indicated he thought the Trump administration’s so-called transgender rule is invalid in light of the Supreme Court ruling in June on a case involving similar issues in the context of job discrimination.”

“When the Supreme Court announces a major decision, it seems a sensible thing to pause and reflect on the decision’s impact,” U.S. District Court Judge Frederic Block wrote, according to the report. “Since [Health and Human Services] has been unwilling to take that path voluntarily, the Court now imposes it.”

“The injunction comes after the Human Rights Campaign (HRC) sued the Trump-Pence administration for advancing a rule that would have eliminated explicit protections from discrimination based on sex stereotyping and gender identity, thereby sanctioning discrimination against LGBTQ people, particularly transgender people, in health care programs and activities,” the organization said in a statement received by Daily Kos. “The rule was scheduled to take effect on August 18 but will now be precluded from becoming operative.”

The anti-trans policy has been among the most recent bigoted actions taken by an administration that has had the gall to call itself any sort of champion for the LGBT community, writer and activist Michelangelo Signorile has written.

“This, even as the Trump administration asked the Supreme Court to allow employers to discriminate against gay, lesbian, bisexual and transgender people in hiring and firing, and of course destroyed the careers of many transgender people by putting in place a ban on transgender service in the military,” he wrote in June. “The GOP’s touting of Trump as pro-LGBTQ—even though it’s patently false—is actually a measure of how far LGBTQ people have come, and how the GOP is on the run.”

Advocates celebrated this court victory. “This is a crucial early victory for our plaintiffs, Tanya and Cecilia, and for the entire LGBTQ community, particularly those who are multiply marginalized and suffering disproportionately from the impacts of the twin pandemics of COVID-19 and racialized violence,” Alphonso David, the organization’s president, said in the statement. “We are pleased the Court recognized this irrational rule for what it is: discrimination, plain and simple. LGBTQ Americans deserve the health care that they need without fear of mistreatment, harassment, or humiliation.”

The administration is on the losing side of this fight and history, but we already know it’ll nevertheless continue this war even as it shamelessly claims to be a champion on LGBT issues. And, as we’ve seen in the administration’s defiance of the Deferred Action for Childhood Arrivals (DACA) decision, this unaccountable president is willing to ignore court orders in order to keep hurting communities.

Who knows what other kind of hateful policies and actions a second term can produce, and we don’t want to find out. This isn’t just about an election: It’s about survival.