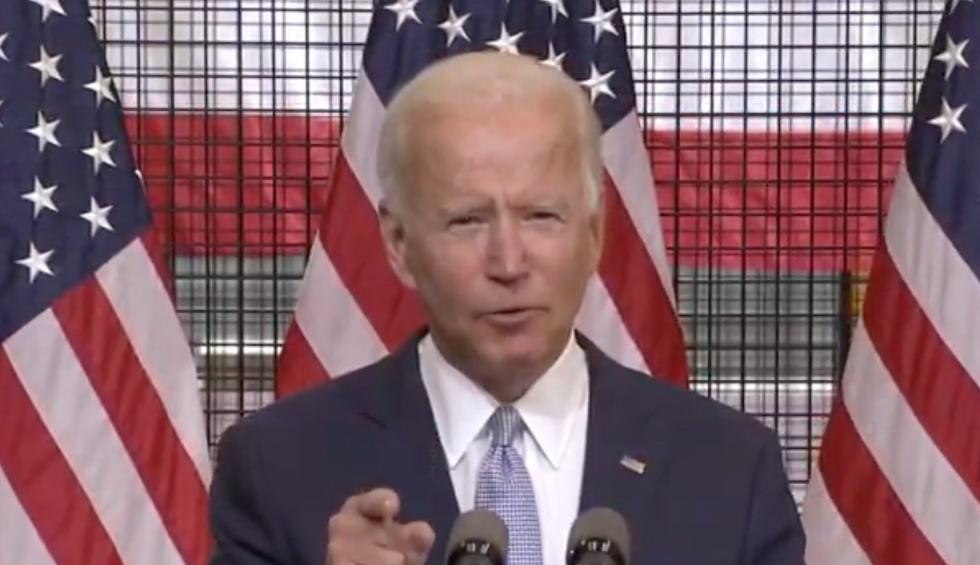 In a speech from Pittsburgh on Monday, former Vice President Joe Biden directly took on recent arguments from the Trump campaign that have attempted to tie him to violence and crime in American cities.

He underlined a simple fact that many critics of President Donald Trump and his campaign have pointed out: It's hard for an incumbent campaign against violence that is happening on their own watch.

"The simple truth is Donald Trump failed to protect America — so now he's trying to scare America," he said. "Trump and Pence are running on this, and I find it fascinating: 'You won't be Biden's America.' And what's their proof? The violence we're seeing in Donald Trump's America. These are not images of some imagined Joe Biden America in the future. These are images of Donald Trump's America today. He keeps telling you if only he was president, it wouldn't happen. He keeps telling us, if he was president you'd feel safe. Well, he is president whether he knows it or not."

He continued: "It's getting worse, and you know why. Because Donald Trump adds fuel to every fire. Because he refuses to even acknowledge that there's a racial justice problem in America. Because he won't stand up to any violence."

Many conservatives have argued that Biden needs to stand up to people carrying out destruction and violence in the streets — even though he has done so repeatedly. It's driven a bizarre media narrative, growing out of the Republican National Convention, that the unrest and violence in Kenosha, Wisconsin, poses a dire threat to Biden's strong lead in the presidential race. Left out of this narrative is any reason why Biden himself, who has also been correctly criticized for being overly supportive of an often oppressive criminal justice system, should plausibly be seen as aligned with crime emerging from protests.

Nevertheless, Biden addressed those concerns directly — though undoubtedly, some cynics will never be satisfied.

He also called out the absurdity of those tying him to the radical left.

"Ask yourself, do I look like a radical socialist with a soft spot for rioters? Really? I want a safe America, safe from COVID, safe from crime and looting. Safer from racially motivated violence, safe from bad cops. Let me be crystal clear. Safe from four more years of Donald Trump," he said.

He added: "He may believe mouthing the words law and order make him strong but his failure to call on his own supporters to stop acting as an armed militia in this country shows how weak he is.

There was so little for the Trump campaign to criticize in the speech that it just ended up lying about it. On Twitter, his campaign shared a 3-second video clip simply of Biden saying, "You won't be safe in Joe Biden's America" — cutting off the context that he was mockingly quoting Mike Pence. Twitter labeled the video as "manipulated media" and many reporters quickly pointed out that it was deceptive. The campaign later said it was a joke. But the ruse was so transparent and unconvincing that it probably did more to undermine the Trump campaign and make it look desperate than to hurt Biden.

At the same time, if the emerging narrative is going to reflect reality, it should focus on the fact that it's Trump who has a hard time denouncing violence when it comes in support of his co-partisans.

When asked for comment about the right-wing Kyle Rittenhouse — accused of murdering people in the Kenosha protests —White House Press Secretary Kayleigh McEnany said Monday that the president wasn't going to comment. Of course, he comments on pending criminal cases all the time when he thinks it's to his advantage. McEnany was eager to comment on the killer of a Trump supporter in Portland, who she claimed was "Antifa." While she said that Trump opposes all violence — a clear lie, given his past comments — this asymmetry was notable. And when asked about a video the president posted showing Trump supporters firing paintballs during protests in Portland, she absurdly claimed the president hadn't seen it. Finally, when asked if the White House opposed vigilantes showing up armed to cities in response to protests, she refused to condemn this activity that has already resulted in killings. Simply telling right-wingers not to bring their guns to protests would probably be the biggest thing the White House could do to calm the unrest, but it won't even take this simple step.