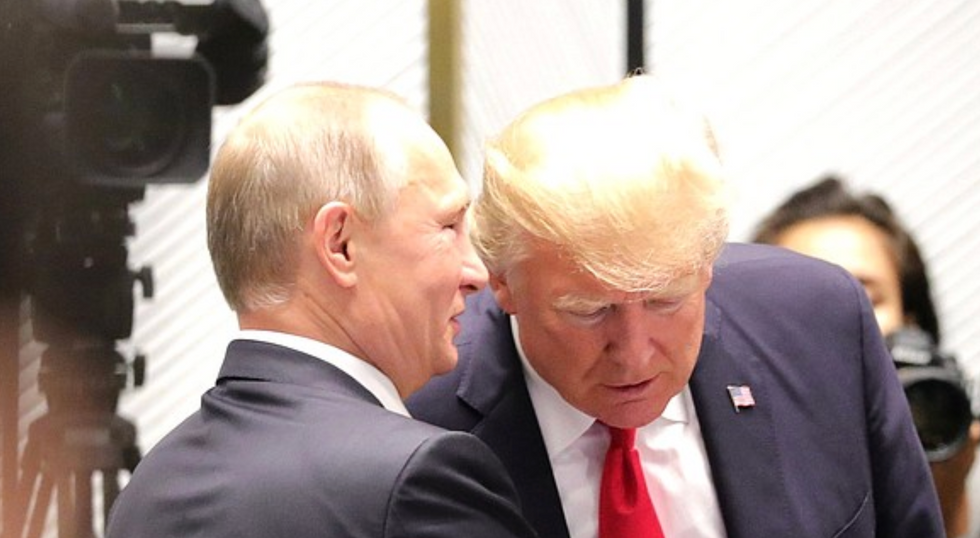 Though former Special Counsel Robert Mueller did not establish that Donald Trump or members of his campaign conspired with the Kremlin in 2016 to influence the election, he famously concluded:

The presidential campaign of Donald J. Trump (“Trump Campaign” or “Campaign") showed interest in WikiLeaks’s releases of documents and welcomed their potential to damage candidate Clinton.

[The] investigation established that the Russian government perceived it would benefit from a Trump presidency and worked to secure that outcome, and that the Campaign expected it would benefit electorally from information stolen and released through Russian efforts...

And this is, undoubtedly, happening again. Despite everything that happened in 2016, the chaos and scandal it unleashed, and all we've learned about the Russian efforts to interfere an American Democracy since then, Trump is welcoming Russia's help once again.

On Sunday, Trump shared a tweet that included audio that U.S. intelligence has determined to be Russian propaganda.

Late Sunday, Trump amplified a tweet that contained audiotapes of a 2016 conversation between Biden and then-Ukrainian President Petro Poroshenko -- material that was released earlier this year by Andriy Derkach, a Ukrainian lawmaker named by the US intelligence community in its August 7 statement about Russia's disinformation campaign against Biden. US authorities labeled Derkach's efforts as disinformation because they are intentionally designed to spread false or misleading information about Biden.

By retweeting material that the US government has already labeled as propaganda -- and doing so with the 2020 Democratic National Convention kicking off on Monday -- Trump demonstrated once again that he is willing to capitalize on foreign election meddling for his own political gain.

The conversation does not actually implicate Biden in any wrongdoing. A voice, purportedly Poroshenko, seems to cast doubt on the claim that the prosecutor Biden pushed out of a top position in Ukraine while he was vice president was corrupt. However, it was the official position of the U.S. government that the prosecutor was corrupt, and his removal was a goal shared by international allies. Additionally, Poroshenko has dismissed the recordings as fake.

By amplifying the recording to his more than 85 million Twitter followers, Trump underscored the ease with which pro-Russian narratives can seep into American public discourse ahead of the 2020 election despite being flagged by intelligence officials as the product of a concerted Russian effort.

Russia has also published disinformation under the guise of legitimate news stories, U.S. officials say, reflecting something of a shift in tactics from 2016, when Russia relied on a social media campaign to sow discord and also orchestrated the release of stolen Democratic emails.

To be clear: Trump has undoubtedly been briefed on what's going on. So either he knows what he's doing or is barely paying attention enough to care.

And he's not the only one. Sen. Ron Johnson (R-WI) has been warned that the investigation he's leading into Biden's past is tainted with Russian disinformation. But he has dismissed these concerns. And despite the obviously opportunistic nature of the inquiry — Republicans had no interest in Biden's actions in Ukraine until he became a candidate for president — he is shamelessly ramping it up. And he has openly admitted that the section of he could use the portion of his probe focused on Trump's "Obamagate" conspiracy theory to have an impact on the election.

"The more that we expose of the corruption of the transition process between Obama and Trump, the more we expose of the corruption within those agencies, I would think it would certainly help Donald Trump win reelection and certainly be pretty good, I would say, evidence about not voting for Vice President Biden," Johnson said in a recent interview, as Politico reported.

More broadly, the GOP has, again and again, rejected Democratic efforts to secure our elections and to forestall further foreign intervention in our politics. While not as overt as Trump and Johnson, the party as a whole has — tacitly or otherwise — become comfortable with letting Russia help the president. What was scandalous in 2016 has now become commonplace.