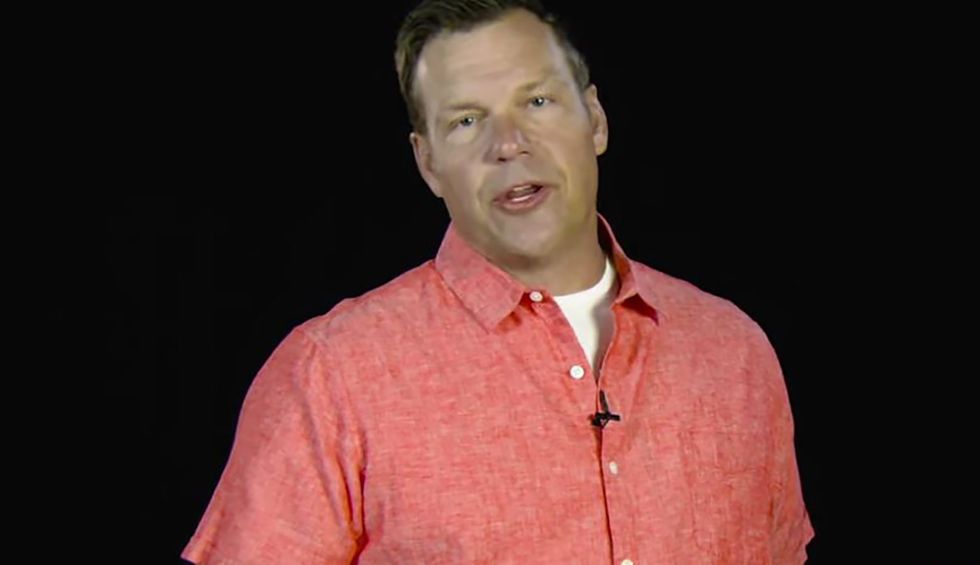 We have a big night on Tuesday with primaries taking place in Arizona, Kansas, Michigan, Missouri, and Washington, with more contests to watch than on any other primary night before the November general election.

However, we may not know all the winners at the end of Tuesday. With the coronavirus pandemic fueling a surge in mail voting, election watchers everywhere should expect that we might not learn the results in every race for some time—perhaps days or even weeks.

Our live coverage will begin at 8 PM ET Tuesday night at Daily Kos Elections when the polls close in Missouri and most of Kansas and Michigan. You can also follow us on Twitter for blow-by-blow updates. And you’ll want to bookmark our primary calendar, which includes the dates of the presidential and down-ballot primaries in all 50 states—many of which have been changed—as well as our separate calendar tracking key contests further down the ballot taking place nationwide this year.

Arpaio’s two intra-party foes are Jerry Sheridan, who served as his chief deputy during his long reign of terror, and Glendale police officer Mike Crawford. Long a favorite of national conservatives, Arpaio has outraised Sheridan $1.2 million to $105,000, while Crawford took in only $5,000. Penzone, by contrast, has hauled in $643,000.

Other Arizona Races to Watch:

Polls close at 8 PM ET / 7 PM local time in the portion of the state located in the Central time zone, where virtually all Kansans live, and an hour later in four sparsely populated counties along the state's western border with Colorado.

• KS-Sen (R) (56-36 Trump, 60-38 Romney): Republicans have a nasty and expensive contest between former Kansas Secretary of State Kris Kobach, Rep. Roger Marshall, and wealthy businessman Bob Hamilton. A few other Republicans are also running to succeed retiring GOP Sen. Pat Roberts, but none of them have attracted much money or attention. The winner will face Democratic state Sen. Barbara Bollier, a former Republican who left the GOP two years ago and has no serious intra-party opposition.

Democrats and Republicans alike all agree that Kobach, who lost the 2018 gubernatorial election to Democrat Laura Kelly, could harm the GOP’s chances in the fall if he wins on Tuesday, and major outside groups from each party are spending millions to secure their desired outcome. A Republican outside group called Plains PAC has dropped $3.3 million on ads to weaken Kobach, while a Democratic-linked organization known as Sunflower State PAC has deployed $5.3 million on commercials meant to boost him and hurt Marshall.

Much of the GOP establishment has consolidated behind Marshall, including Roberts. The congressman has also benefited from positive ads from the U.S. Chamber of Commerce and the Senate Leadership Fund, which is run by allies of Senate Majority Leader Mitch McConnell. Kobach, in turn, has been aided by $1.7 million in spending from Free Forever, a PAC funded by far-right billionaire Peter Thiel and the only group that actually wants to see Kobach in the Senate.

Hamilton, meanwhile, has used his wealth to outspend his primary foes, but while some outside groups have run ads against him, they’ve mostly focused on Marshall and Kobach. However, Hamilton and Marshall have aired several negative ads targeting each other.

• KS-01 (R) (69-26 Trump, 70-38 Romney): Four Republicans are running to succeed Senate candidate Roger Marshall in this safely red western Kansas seat, though only two of them have attracted much money or support. Finney County Commissioner Bill Clifford, who has self-funded most of his campaign, has outspent former Lt. Gov. Tracey Mann, and he’s also benefited from more outside spending.

Watkins has responded to the charges insisting that, like Donald Trump, he’s the victim of a corrupt prosecutor, and by portraying LaTurner as a career politician who has supported higher taxes. LaTurner has in turn run ads highlighting Watkin's scandal and argued that the congressman's weak win in the 2018 general election means that he could cost Team Red this Topeka-area seat in the fall. Despite Watkins' extreme legal woes, however, LaTurner has proven to be a very weak fundraiser.

• KS-03 (R) (47-46 Clinton, 54-44 Romney): Democrat Sharice Davids flipped this suburban Kansas City seat last cycle, and five Republicans are all hoping to retake it. The only two contenders who have brought in much money, though, are former state party chair Amanda Adkins and Sara Hart Weir, the former head of the National Down Syndrome Society. Adkins has outspent Weir and benefited from another $215,000 in spending from a super PAC financed by her father.

Polls close at 8 PM ET in the portion of the state located in the Eastern time zone, where almost all Michiganders live, and an hour later in four small counties in the Upper Peninsula along the state's western border with Wisconsin.

• MI-03 (R) (52-42 Trump, 53-46 Romney): Republican-turned independent-turned Libertarian Rep. Justin Amash is not seeking reelection, and five Republicans are competing to retake this seat in the Grand Rapids area. The winner will face attorney Hillary Scholten, who has no Democratic primary opponent.

The only two Republicans who have spent a credible amount of money are Army veteran Peter Meijer and state Rep. Lynn Afendoulis. Meijer, whose family owns an eponymous retail chain with almost 200 locations across the Midwest, has the backing of House Minority Leader Kevin McCarthy, and he’s outspent Afendoulis.

Wealthy businesswoman Lisa McClain has used her personal resources to massively outspend state Rep. Shane Hernandez and retired Air Force Brig. Gen. Doug Slocum; and a group called the U.S. Future Fund has also deployed $460,000 on ads supporting her and going after Hernandez. However, the extremist anti-tax Club for Growth has spent a hefty $1.5 million on pro-Hernandez and anti-McClain commercials. Mitchell is backing Hernandez, while former Gov. Rick Snyder is pulling for Slocum.

The only poll we’ve seen was a mid-July survey from WPA Intelligence that showed Hernandez leading McClain 33-27, while Slocum was in third with 10%.

• MI-11 (R) (50-45 Trump, 52-47 Romney): National Republicans haven’t shown much interest yet in targeting freshman Democratic Rep. Haley Stevens in this suburban Detroit seat, but five Republicans are running to face her this fall.

The two Republicans who have reported spending a notable amount are self-funding businesswoman Carmelita Greco and attorney Eric Esshaki. However, perhaps the candidate with the most name recognition is former Rep. Kerry Bentivolio, who won the GOP nomination 2012 in an utter fluke (remember Thad McCotter?) and then badly lost it two years later. Bentivolio has waged several failed campaigns since then as both a Republican and an independent; as per usual, he's brought in little money for his latest endeavor. A mid-July WT&S Consulting poll for Bentivolio, though, showed him leading Greco 23-22, with Esshaki at 9%.

• MI-13 (D) (79-18 Clinton, 85-14 Obama): Rep. Rashida Tlaib, who is one of the most high-profile members of the House freshman class, faces a primary rematch with Detroit City Council President Brenda Jones in this safely blue seat.

Each woman defeated the other on the same day in 2018 thanks to some unusual circumstances. Last cycle there were two different primaries here: A six-way contest for the full two-year term, and a four-way special election for the final months of former Rep. John Conyers' term. Tlaib narrowly beat Jones 31-30 in the regular primary, but it was Jones who edged Tlaib 38-36 in the special, though her victory allowed her to serve just a few weeks in the House.

This time, Tlaib and Jones are the only candidates. Tlaib has massively outspent Jones, and a late July Target Insyght poll had the incumbent ahead 52-24.

Other Michigan Races to Watch:

• MO-01 (D) (77-19 Clinton, 80-19 Obama): Longtime Rep. Lacy Clay defeated nurse and activist Cori Bush for the Democratic nomination by a 57-37 spread in 2018—a margin that would be a blowout in a general election but is relatively weak for a primary—and Bush is running again for this safely blue St. Louis seat.

Bush has argued that Clay, who has represented this seat for almost 20 years, has not risen to meet the challenges of this moment in American history. Bush has raised considerably more money for this campaign than her last effort, and she’s benefited from another $240,000 in outside spending from two groups, Fight Corporate Monopolies and the Justice Democrats. Clay seems to be taking Bush’s second bid more seriously, as evidenced by an attack ad he recently launched against her.

• MO Ballot (56-38 Trump, 54-44 Romney): Missourians will also be voting on a statewide ballot initiative called Amendment 2 that would expand Medicaid to 230,000 residents. The measure would amend the state constitution to prevent Republican lawmakers, who have consistently refused to expand Medicaid, from rolling back the expansion should it pass.

Supporters have castigated Republican Gov. Mike Parson for moving the vote from November to the Aug. 4 primary, charging that Parson did so in the hopes that lower turnout would help defeat the amendment. However, a similar move in neighboring Oklahoma failed to prevent a comparable measure from narrowly passing in late June.

There's been no public polling, but ballot measures to expand Medicaid in red states have been successful not only in Oklahoma but also in Idaho, Utah, and Nebraska, all of which voted in favor in 2018. Advocates have argued that Missouri is missing out on its fair share of federal tax dollars (which would pay for most of the expansion), while opponents, who have been heavily bankrolled by billionaire GOP megadonor Rex Sinquefield, have resorted to baseless racist claims that passage would mean "illegal immigrants flooding Missouri hospitals."

Other Missouri Races to Watch:

Washington’s top-two primary requires all candidates to compete on one ballot rather than in separate party primaries. The two contenders with the most votes, regardless of party, advance to the Nov. 3 general election. Candidates cannot win outright in August by taking a majority of the vote.

• WA-10 (51-40 Clinton, 56-41 Obama): A total of 19 candidates are campaigning to succeed retiring Democratic Rep. Denny Heck in this seat located in the Olympia area and Tacoma suburbs. There are eight Democrats and eight Republicans as well as three independents, making it possible that only one party will be represented in the general election.

The three most serious candidates are all Democrats. State Rep. Beth Doglio, former state Rep. Kristine Reeves, and former Tacoma Mayor Marilyn Strickland have all spent comparable amounts of money. Former Heck district director Phil Gardner is also running but was far behind financially. The Congressional Progressive Caucus has spent $336,000 to help Doglio, while the Congressional Hispanic Caucus has deployed $246,000 to aid Reeves. While Strickland doesn’t have much outside support, though, she has former Democratic Govs. Gary Locke and Christine Gregoire in her corner.

Other Washington Races to Watch:

Tuesday will be an exciting night, so we hope you’ll join us for our liveblog at Daily Kos Elections!