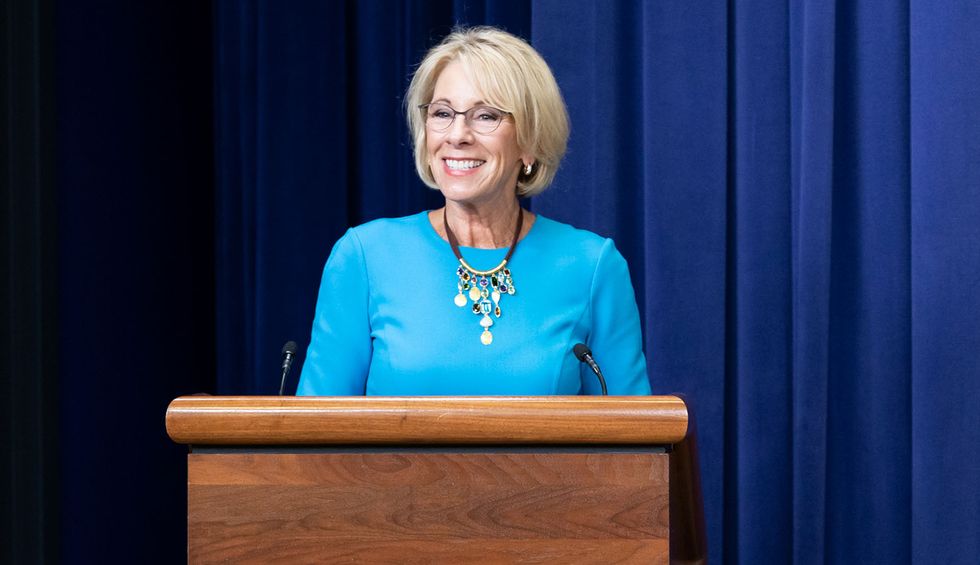 Sen. David Perdue of Georgia, a Republican up for re-election this fall, recently introduced a bill called the ''Safely Creating Healthy Opening Options Locally Act'' (the SCHOOL Act), which would give Education Secretary Betsy DeVos control over $50 billion in federal relief grants to local school districts. In the past, Perdue has repeatedly called for defunding and abolishing the Department of Education.

Perdue, who finds himself in a tight race against Democrat Jon Ossoff, a media executive and former congressional candidate, has pitched the bill as way to incentivize schools to reopen amid the coronavirus outbreak, which he once compared to car crashes.

Under the bill — currently in limbo after negotiations over the second round of pandemic relief fell apart — schools could apply for federal grants by submitting reopening plans to the Department of Education. The grants would help fund protective equipment and other hygienic needs for individual schools.

The bill would also create a federal database for sharing information and best practices nationwide, an apparent departure from Perdue's 2014 campaign position that the department should be dissolved because he didn't "see education in the Constitution."

At a campaign event in 2014, the former Dollar General CEO said he viewed the Department of Education as an underperforming corporate division that should be "defunded," with education spending decisions focused at the local level.

He singled out the Department of Education as an example of one of 480 "redundant" federal agencies. It spends more than $70 billion a year, he said, "and yet the results we're seeing are not acceptable. And this is not partisan. We're talking about both sides here."

Earlier that year Perdue complained that "we can't just throw more money" at education policy to the Marietta Daily Journal. a Georgia newspaper.

"We spent $71 billion in our Department of Education in Washington. In 2009, we only spent $32 billion," he said. "I think we've proven that over 30 years we can't just throw more money at it and expect better results because that hasn't worked," he added.

In a later interview with the Journal, Perdue, whose parents were both teachers, said he wanted to abolish the department entirely.

Today, however, Perdue wants to entrust that same department with allocating $50 billion to schools however DeVos sees fit.

"It's an incentive to do it the right way, according to the CDC," Perdue told Atlanta's 11 Alive last month. "The factors are the qualification for the funding would be compliance with the CDC guidelines."

DeVos, however, has a record of funneling federal coronavirus relief money to schools that might not need it. She unilaterally diverted millions of dollars in relief to private schools, and admitted to using the pandemic as a way to further her private school agenda. She was sued in late July for illegally diverting emergency funds intended for public schools to private schools, and a Salon investigation found that charter schools that received federal money might have double-dipped as much as $1 billion in small business loans.

A group of students sued the Department of Education in May, accusing DeVos of illegally seizing wages from borrowers amid the pandemic to pay down debt, a move she herself later acknowledged in court.

Last October, A. Wayne Johnson, DeVos' deputy in charge of overseeing federal student debt program, resigned in protest, comparing the challenges facing her program to a pandemic — which at the time was a hypothetical scenario.

"If this was a medical problem, it would be a pandemic, and the whole country would be figuring out how to inoculate against it," Johnson told Politico.

Upon resigning, Johnson immediately launched a long-shot Republican campaign for Georgia's other Senate seat, running against appointed GOP Sen. Kelly Loeffler (and various other candidates of both parties) in the Nov. 3 nonpartisan special election that has been described as the "jungle primary." He's running on wiping student debt.

Georgia schools have already begun to reopen, turning Perdue's state into something of a Petri dish for the upcoming school year. The experiment has been mixed: A second-grader tested positive after the first day of class last Wednesday, and nine more people tested positive Monday at one high school after a week of in-person classes, which followed widely reported positive tests among football players and teachers.

"I think quite honestly this week went real well other than a couple of virtual photos," Republican Gov. Brian Kemp told reporters at a Monday news conference with the U.S. surgeon general.

The Secretary shall determine which local educational agencies will receive a grant, and the amount of each such grant, after considering school size, school setting, specific school needs, and timing of in-person classes.

"Both my parents were public schoolteachers, as was my wife, and they always said that the best decisions about a child's education are made between parents, teachers, principals, and local administrators," Perdue said in a statement announcing his bill. "I agree with that."