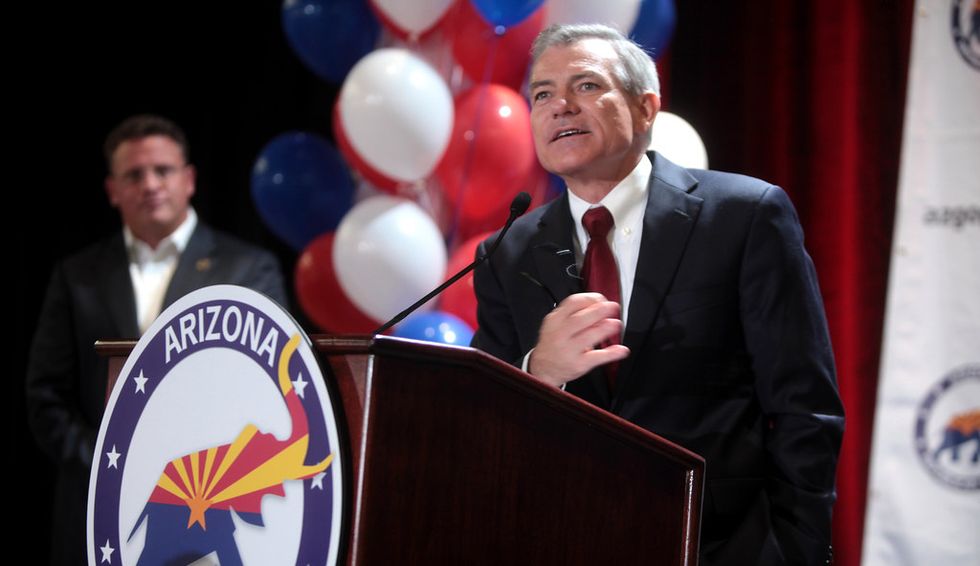 Republican Rep. David Schweikert agreed to pay a $50,000 fine, accept a formal reprimand, and admit to 11 different violations of congressional rules and campaign finance laws in a deal with the bipartisan House Ethics Committee to conclude its two-year-long investigation of the congressman. But while the matter may now officially be closed, Schweikert's already uncertain political future is now only more endangered.

A special subcommittee convened to carry out the inquiry determined in its own lengthy report that Schweikert had failed to disclose at least $370,000 in campaign donations, expenditures, and loans between 2010 and 2017, and had used at least $1,500 in campaign funds for "impermissible personal purposes." It also found that Schweikert had falsely claimed he loaned his campaign $100,000 on Christmas Day in 2011, then later made up five fictitious payments to a consulting firm that wound up totaling the same amount in order to get his books to balance.

Why lie like this? At the time, Schweikert was on a collision course with fellow GOP Rep. Ben Quayle, since redistricting made it likely that both would try to seek reelection in the same district. Schweikert had immediately announced his intention to run in the 6th District as soon as new maps were announced in October of 2011, but Quayle dithered, so Schweikert almost certainly inflated his cash-on-hand figures with his fake loan in order to deter Quayle from opposing him. It didn't work, as Quayle eventually decided to go head-to-head with Schweikert, but Schweikert wound up narrowly winning their primary, 51-49.

This sort of scam was in fact an ongoing occurrence, according to the Ethics Committee. Schweikert's chief of staff, Oliver Schwab, regularly made outlays on behalf of the congressman's campaign committee that ultimately totaled $270,000, and Schweikert would delay reimbursing Schwab in order to again pad his cash balance on his fundraising reports. He later would conceal repayments to his aide by listing the recipient as Schwab's consulting company.

It was Schwab's behavior, in fact, that helped spur the investigation that ultimately led to Thursday's settlement. In the fall of 2017, the conservative Washington Examiner published a report alleging that Schwab had taken a trip from D.C. to Arizona for Super Bowl weekend in 2015 that was paid for by taxpayers but included non-official activities, such as a Schweikert fundraiser. The Ethics Committee agreed the use of public funds for this trip was improper, though Schwab had already repaid the U.S. Treasury, leading the panel to conclude that "no further steps are required."

Schwab was also at the center of investigators' findings of improper pressure placed on congressional staff to assist Schweikert's campaigns. The committee determined that Schweikert himself "regularly pressured" Schwab to perform campaign work, especially fundraising, and that Schwab in turn pushed other aides to help raise money. One unnamed former staffer charged that Schwab had told him he "would need to take a 40 percent pay cut and his performance would be judged on fundraising," an accusation Schwab did not deny. Schweikert's "lax oversight" of his own office, said the committee, was a violation of House rules because of the atmosphere it created.

Schweikert had a similarly laissez-faire attitude about telling the truth during the course of the Ethics Committee's investigation. The subcommittee's report says the congressman made "misleading" statements, took inordinately long to produce documents, and "made statements that could not be reconciled with the evidence" during his interview with investigators, for which he had come "ill-prepared." The full committee's briefer report concluded that Schweikert's dilatory behavior "allowed him to evade the statute of limitations for the most egregious violations of campaign finance laws"—actions that "were themselves sanctionable misconduct."

Perhaps the only good news for Schweikert in all this is that he can finally stop hemorrhaging cash to his attorneys: His campaign had spent at least $1.1 million in legal fees as of mid-July. But now his Democratic opponent in the November general election—likely physician Hiral Tipirneni—will be able to blast out ads reminding voters that their congressman admitted to almost a dozen ethical violation, paid a huge fine, and was formally sanctioned by the House.

And if Tipirneni wins next week's primary, she'll definitely have the funds to do so. While Schweikert's campaign balance stands at a meager $230,000 thanks to all those expensive lawyers, Tipirneni is sitting on a giant stockpile of $1.3 million.

Schweikert is also facing an electorate that's grown increasingly hostile to the GOP: While Mitt Romney carried Arizona's 6th District—well-educated and relatively affluent turf in the Phoenix suburbs—by a hefty 60-39 margin, Donald Trump only won it 52-42, and Republican Martha McSally prevailed just 51-47 in her unsuccessful Senate bid in 2018. Given the district's demographics, it's far more likely than not that this leftward trend is still underway.

It's quite an irony: Schweikert engaged in all of this skulduggery in order to help him win his past elections. Now it can only help him lose his next one.