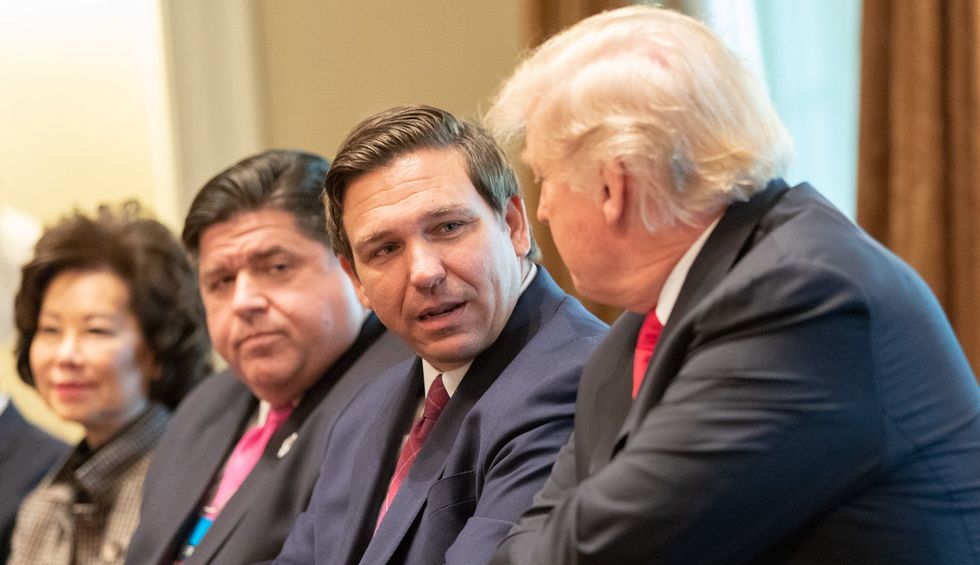 Even a close ally of the president, Florida Gov. Ron DeSantis, admitted on Tuesday that he can't make the White House's plan to extend boosted unemployment insurance benefits work in his state.

When Congress passed the CARES Act in March, it provided people who became unemployed during the pandemic to receive an additional $600 per week on top of the amount their states would typically provide, which is usually a fraction of what their salary had been. And though Democrats passed a bill through the House to extend these benefits past the end of July and into 2021, the Republicans in the Senate dithered and only began working on the problem in the weeks before the program expired. They passed nothing, the program expired, and Trump issued a series of executive actions that were supposedly designed to extend the benefits at $400 a week going forward and take other steps to mitigate the impact of the coronavirus.

But it was quickly pointed out that there was much less to Trump's acts than he had promised. As DeSantis told reporters Tuesday, the plan to boost unemployment insurance in Florida can't get off the ground.

“That’s not an option for us in Florida, because those CARES Act dollars are obligated already,” DeSantis said, according to the Tampa Bay Times.

Trump’s idea is to allow the state to spend emergency pandemic and natural disaster funds to increase benefits by $400 per month. The emergency CARES Act dollars that Trump said would pay for the unemployment relief in his plan have already been assigned to pandemic-related expenses, DeSantis said.

The state has more than $5 billion in CARES Act dollars that haven’t been spent, but DeSantis said the money would not be used on unemployment benefits.

“They haven’t been quote, ‘spent,’ but it’s $4 plus billion that’s been obligated, so we’ve got to do that,” DeSantis said.

The Times also noted that Florida's base-level benefits are among the "stingiest in the nation," with recipients getting a maximum of $275 a week.

It's not just DeSantis that's running into trouble with Trump's plan.  The Hill reported that governors around the country were upset with the president's effort because it pushes them to cover 25 percent of the cost of the boosted unemployment:

The additional costs for states received a frosty reception among governors on a weekly conference call with Vice President Pence, according to a person on the call. Pence at one point acknowledged that the cost-sharing with states was not the administration’s first choice, the person said.

New York Gov. Andrew Cuomo (D) on Monday compared the unemployment burden placed on states to “handing a drowning man an anchor.” He said he expected it would be challenged in court, noting that it could cost his state $4 billion through the end of 2020.

“For the state to absorb $700 million per week ... would create a burden the likes which even a state as large as California can never absorb without, again, massive cuts to important services,” Newsom said in a news briefing.

The burden on the states is particularly egregious because Senate Majority Leader Mitch McConnell, along with Trump, has been fighting the Democrats' efforts to provide budgetary support to state and local governments, which are suffering severely as their tax bases feel the strain of the recession.

Meanwhile, Trump also claimed that he was cutting payroll taxes by deferring collection between September and the end of the year. But as the Wall Street Journal reported, employers are extremely wary of this gambit, because the taxes will still ultimately be owed unless Congress acts:

Employers’ biggest worry: If they stop withholding taxes without any guarantee that Congress will actually forgive any deferred payments, they could find themselves on the hook. That is a particular risk in cases where employees change jobs and employers can’t withhold more taxes from later paychecks to catch up on missed payments.

“The Internal Revenue Service will come to that deep pocket” of employers to collect payroll taxes, said Marianna Dyson, a lawyer at Covington & Burling LLP in Washington who specializes in payroll taxes. “Liability is going to stick to the employer like flies to flypaper.

But while states and employers flounder, the White House is apparently betting that its plan to circumvent Congress will go off without a hitch. Politico's Morning Money reported that Trump's lead negotiator has taken a vacation:

MM spoke with a couple of senior administration officials who both said they see little chance a fiscal stimulus deal comes anytime soon. There are not likely to be any serious talks this week, partly because White House chief of staff Mark Meadows is out for the week but mostly because the administration feels confident they have the upper hand politically following President Donald Trump’s executive actions (more on which below).