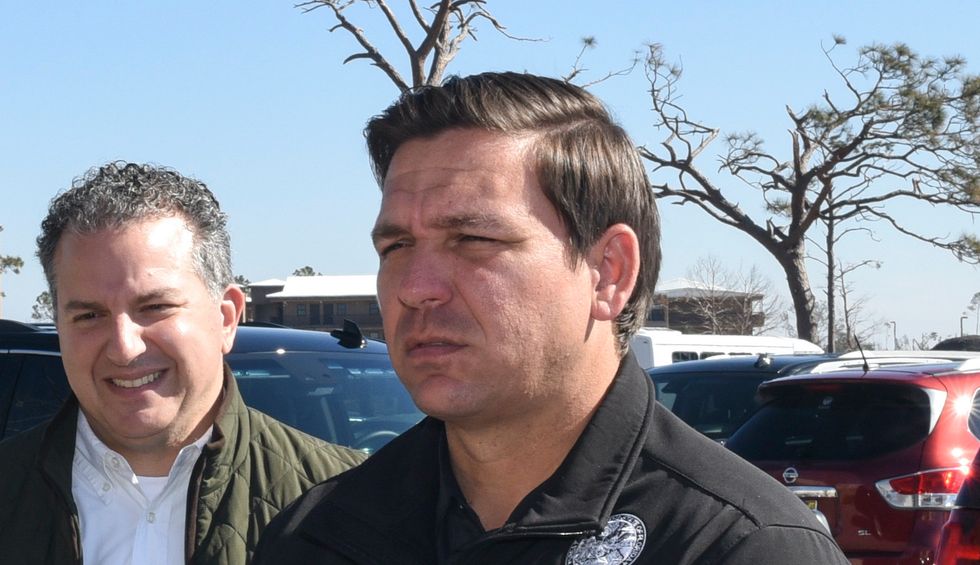 Florida Gov. Ron DeSantis, right, speaks with members of Tyndall Air Force Base, Fla., leadership during the governor’s first visit to the base since becoming governor, Jan. 16, 2019. After an early lunch meeting, DeSantis joined leadership on a windshield tour of the base to view recovery and reconstruction efforts after Hurricane Michael, a category 4 hurricane that made landfall over Tyndall Oct. 10, 2018. (U.S. Air Force photo by Airman 1st Class Solomon Cook)
Laura Clawson
and
Daily Kos
August 05, 2020 News & Politics

Last week, DeSantis attended a Florida Sheriffs Association meeting. As of Monday, five of the attendees of that meeting have tested positive for COVID-19, including Corrections Secretary Mark Inch and Department of Corrections Deputy Secretary Ricky Dixon. Two sheriffs have also tested positive, one of whom got his positive test just hours before he was slated to appear with Trump at an endorsement event. Fifteen sheriffs did do that Trump event, with none of the participants wearing masks.

DeSantis strongly implied but did not say outright that he had recently had a negative test. “I’m tested regularly, and I don’t have or have not had any symptoms,” he said. “The number of times I’ve been tested has been pretty significant, and I’ve had my temperature checked probably 100 times in the last few months.”

Florida Attorney General Ashley Moody and incoming state House Speaker Chris Sprowls also attended the sheriffs meeting. Organizers of the event said strict social distancing procedures were observed, and it’s not known whether the people who have since tested positive were infected there or elsewhere.

Florida’s new cases are trending down after several disastrous weeks, but the state still had 245 deaths reported Tuesday (though reports can come days or even weeks after the death occurred). The state’s positive test rate has been over 10% on all but two days over the past two weeks.