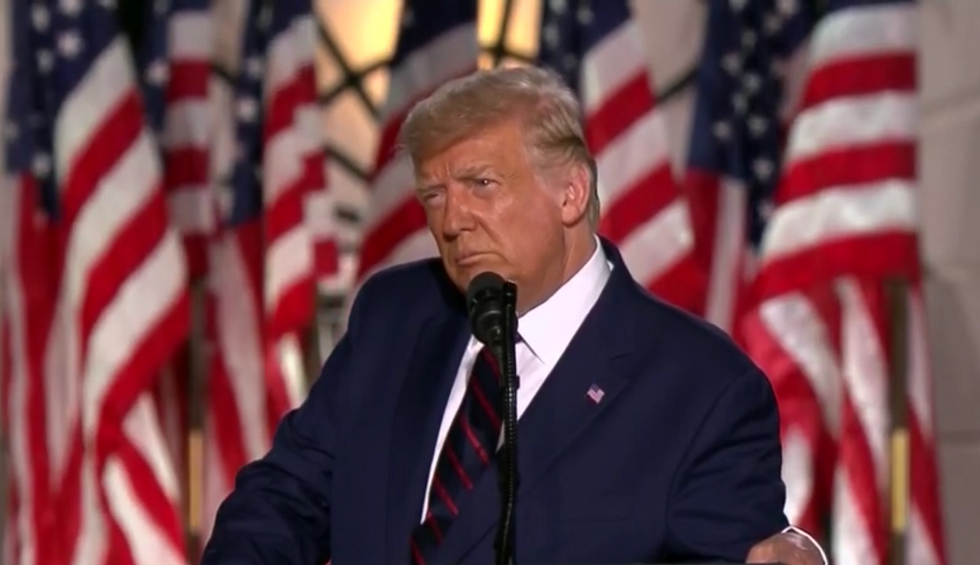 He's been on the job for almost four years, but President Donald Trump still hasn't figured out how to read properly from a teleprompter.

On Thursday night, Trump delivered the final speech of the Republican National Convention, officially accepting his party's nomination to face off against Democratic opponent Joe Biden. But while Biden's closing speech the week before surprised viewers by portraying the candidate as a dynamic, thoughtful, and expressive speaker — arguably even outshining the star power brought by the Obamas in previous nights — Trump's performance was just another half-hearted and labored effort at getting through a text someone else wrote.

Trump is known for his extemporaneous speaking style. He's often longwinded and meandering, jumping from topic to topic without finishing a whole arguments, sentences, and thoughts. But when he speaks like this, he's almost always animated and passionate. The exception is when he's reading from a script. Teleprompter Trump has none of the manic charisma that his freewheeling alter-ego displays. Instead, the president falls into a dull monotone and a repetitious speaking pattern that suggests he knows little about what he's actually saying and cares even less.

He wishes he could just speak off-the-cuff, but he knows it's sometimes better to color within the lines.

That's the way his speech went Thursday night. Don't get me wrong — it was still ludicrous and absurd, filled with lies, demagoguery, distortions, exaggerated attacks on his enemies, and empty boasts about his performance. His speechwriters certainly made the language and content Trumpian.

But you could tell his heart was not in it. The biggest tell is when he goes off-script and ad-libs a phrase or a line or two. His entire demeanor changes, he perks up, his voice sounds excited and engaged. He'll call out to the audience and connect with someone. And then he refocuses his eyes back on the teleprompter, and his voice falls back into it its tedious pattern.

It's noticeable how unfamiliar Trump is with the text. He often mispronounces words or stumbles over phrases, but he never acknowledges a mistake. He'll awkwardly try to act as though his mistake was intentional, though the tactic rarely works.

At one point in the Thursday night speech, he made what appeared to be an ad-libbed joke at Biden's expense — but one that suggested he didn't understand the very words he had just spoken. Here's the section, as printed in NPR's transcript:

Joe Biden may claim he is an ‘ally of the light,’ but when it comes to his agenda, Biden wants to keep us completely in the dark.

He doesn’t have a clue.  He has pledged a $4 trillion tax hike on almost all American families, which will totally collapse our rapidly improving economy.

The first line was a good one, in theory. It took Biden's themes of light and dark from his convention speech, and it tried to twist them around to convey a central attack of the Trump campaign: that Biden has a secret agenda for the country that he's not sharing with the American people.

But then Trump added: "He doesn't have a clue." In context, this doesn't really make sense. If you're arguing Biden has a secret plan for America, he does have a clue. That's the point. He's in on a nefarious plot against the country. That's why the next line is about the trillion-dollar tax hike (which Biden has said won't affect families making less than $400,000 a year.)

What seems to have happened, though, is Trump heard the words "Biden," "completely in the dark," and the crowd's laughter, and his mind immediately leaped to making a joke about Biden being in the dark. It made no sense in the context of the speech, but it was easily triggered in Trump's schoolyard bully brain.

Another moment of the speech demonstrated a similar problem. The speech read:

Millions of jobs will be lost.  And energy prices will soar.  These same policies led to crippling power outages in California just last week, everybody saw that.  Tremendous power outage.  Nobody has seen anything like it.  But we saw that last week in California.

How can Joe Biden claim to be an “ally of the light,” when his own party can’t even keep the lights on.

Again, it was a decently clever way of trying to use Biden's words against him. But Trump, seemingly reading the speech for the first time, didn't seem to realize the punchline was coming. So he just barreled through the words, failing to pause for comic effect, making the quip much less impactful than it could have been for the audience.

Another problem with the speech was that it was long. It clocked in at over an hour, which is particularly difficult to sit through when a speaker is as unengaging as Teleprompter Trump. Biden's speech last week was kept well under 30 minutes and was widely praised as sharp and effective.

It's not the biggest deal in the world that the president couldn't manage to give a decent speech at his convention. There are much bigger problems with his campaign and administration. But it is revealing of a problem that is important and that potentially fuels a lot of the mistakes he has made as president.

As I've said, Trump's inability to read from a prompter well is a consistent failing. So why has no one been able to convince him to practice? Why hasn't the campaign brought in a speech coach to work with him and improve his performance? It's a simple thing, and it wouldn't take much effort at all. But what it would take is humility — for Trump to admit that there's something he's not very good at. And it may take his aides having the courage to say he has a problem he needs to fix.

Trump's lack of humility and lack of aides who will tell him what he doesn't want to hear are two major problems plaguing his presidency. And for that, we are all paying the price.