Don Jr. fears his father will lose — and the Trump family will be prosecuted: report 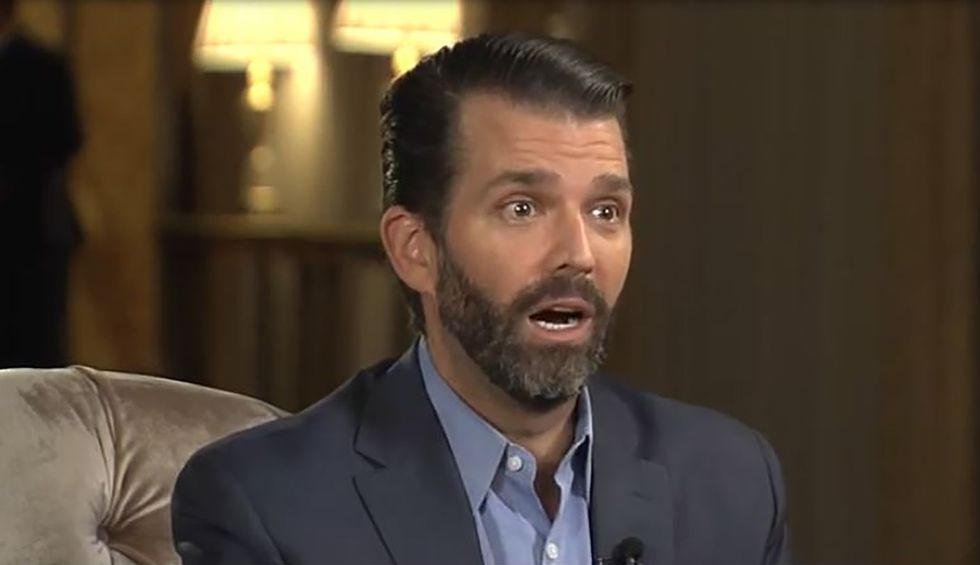 After former Special Counsel Robert Mueller delivered the final report for the Russia investigation in 2019, he noted that the U.S. Department of Justice has a longstanding policy against prosecuting a sitting president. But if former Vice President Joe Biden defeats President Donald Trump this November, he will no longer be a sitting president after Biden is inaugurated in January 2021. And according to a lengthy piece by journalist Jason Zengerle for the New York Times, Donald Trump, Jr. is worried about the possibility of members of his family facing criminal prosecutions if the president loses to Biden.

Zengerle’s article takes an in-depth look at the prominent role that Trump, Jr. is playing in the president’s reelection campaign. And an anonymous source described by Zengerle as a “prominent conservative activist” told the Times, “Don’s the only person who thinks they’re going to lose. He’s like, ‘We’re losing, dude, and we’re going to get really hurt when we lose.’”

Zengerle explains that by “really hurt,” that source means criminal prosecutions. The Times journalist reports, “An electoral defeat in November, Trump Jr. fears, could result in federal prosecutions of Trump, his family and his political allies. He has told the conservative activist that he expects that a Biden administration will not participate in a ‘peaceful transition’ and instead, will ‘shoot the prisoners.’”

“When Trump ran for president in 2016, Trump Jr. — who is now 42 — was involved but hardly central to the effort,” Zengerle notes. “His sister Ivanka and her husband, Jared Kushner, exercised sweeping influence over the campaign. Trump Jr., by contrast, was assigned small, discrete tasks, like putting his outdoorsmanship on display in a pheasant-hunting photo-op with his brother, Eric.”

But Zengerle emphasizes that four years later, Trump, Jr. is by no means a marginal figure in Trumpworld and has “grown into arguably his father’s most valuable political weapon.” Now, according to Jason Miller — a senior adviser on Trump’s reelection campaign — “Don, Jr. represents the emotional center of the MAGA universe.” And Zengerle points out that Trump, Jr.’s girlfriend, Kimberly Guilfoyle, is also a prominent figure in Trumpworld.

“Trump Jr. is now a key player in the Republican Party’s 2020 operation,” Zengerle observes. “He and Guilfoyle have become fund-raising powerhouses, coaxing large donations from high-dollar donors. Guilfoyle is reportedly paid $15,000 a month by the Trump campaign. E-mail solicitations sent out by the National Republican Congressional Committee, the House Republicans’ election arm, under Trump Jr.’s name have so far raised more than $3 million in small-dollar donations.”