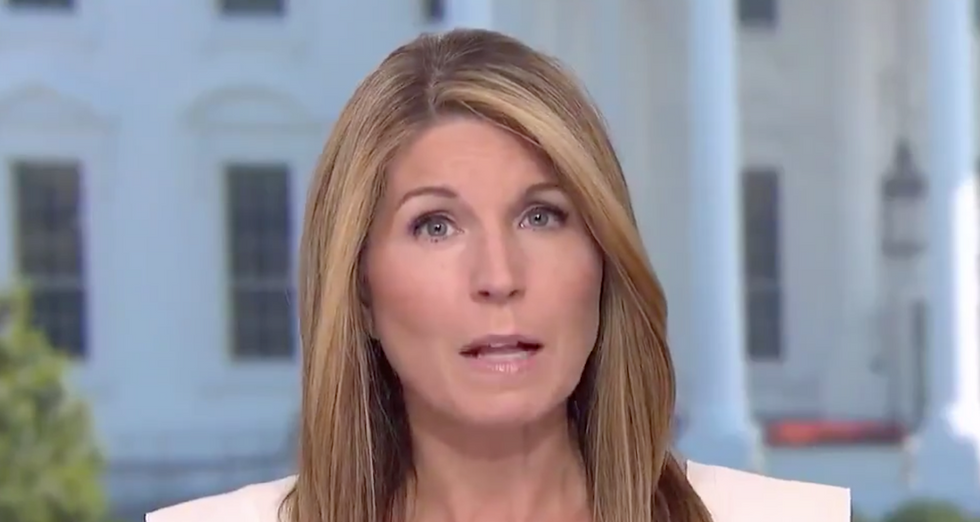 Speaking to MSNBC's Nicolle Wallace on Friday, two foreign policy experts explained the shocking ways in which President Donald Trump has ignored the continued attacks on the American election at the hands of Russia. Trump has spoken to Vladimir Putin five or six times since it was discovered that Moscow was paying bounties for the deaths of Americans. He didn't address any of it; he confessed because he believes the report was a hoax.

But when Wallace turned to the doctor on her panel to ask about the next steps of the coronavirus, things looked even worse.

"President Trump is in a dilapidated political state because of his inactions and failures to lead the country through a global pandemic," Wallace began. "You said, we would stop being America if things got much worse -- you said a few weeks ago. You first raised my attention to the disinformation being spread around the pandemic and vaccines. What strikes you about this intel report that Russia is now actively working to hurt Biden to help Trump with the specter of disinformation spread around the pandemic and vaccines. Facebook and Twitter both took down some of Trump's disinformation as it pertained to infection risks for children. It's probably like whack-a-mole if you had to pull it all down."

"Yes, there's a number of things, we'll call this chaotic Friday, we're projecting a lot of chaos across the country as we head into the fall," said Dr. Peter Hotez, the director of Texas Children's Hospital Center for Vaccine Development. "Look, we're at the U.S. right now, leads the world in the number of new cases and deaths over the last seven days, and this has been true for the last few months. So, our epidemic is still spiraling out of control. The new estimates are 300,000 deaths by December and possibly 400,000 deaths by January. To put that number in perspective, that's the number of Americans that died in World War II. We're dealing with something of that magnitude, and still no plan for control at all."

He went on to say that at the same time, there's no real plan to deal with the virus, there are so many conspiracy theories coming out of the president and the White House.

"Including those put out by the White House, around the Chinese Communist Party or blaming the World Health Organization," Dr. Hotez said of the conspiracies. "Part of this is a larger anti-science disinformation campaign. And we've also learned that the Russians are involved in spreading false information about vaccines, and we have this terrible number now that -- depending on whose survey you want to look at, between 25% and 50% of Americans will refuse COVID-19 vaccines even when they become available next year."

The anti-science movement began as an anti-vaccine movement, he said, and now it has evolved into people who oppose contact tracing, social distancing, and wearing masks. It's further fueling deaths, he explained.

"I wrote an article a few weeks back," he added. "It predicted a chaotic time in the country as the president's poll numbers drop because of COVID-19. And the White House continues to deflect by blaming China, and the World Health Organization. Then scientists, right after that came out, they attacked Dr. Fauci. This will continue the targeting of scientists. So, put your tray-table up in the upright and locked position. It's going to be a tough fall. I'm afraid."

Wallace asked about Jenny McCarthy, who she said has spent years trying to undo the damage she created with her anti-vaccine movement. Using that as a case study, she asked Dr. Hotez how one can predict the impact of an anti-science president on the pandemic.

"Yeah, we could have, and still can, contain this virus," he said. "But it requires leadership at the federal level, and there was never an interest in letting the federal level lead this. It was always put the states out front, and the federal government will provide FEMA support and backup support."

He noted that there was never an attempt by the president to encourage people to wear masks or support contact tracing.

"This is why we have the world's worse COVID-19 epidemic," said Dr. Hotez. "We talk about this like it's in the past, but the worse is yet to come. We're going to double the number of deaths over the next few months and now we know it's not just deaths. We're seeing long-term injury to the lungs, to the vascular system, to the heart, neurological deficits, cognitive deficits. This will plague the country for years and years, even after the vaccine is out."

Wallace closed the panel by thanking them for "scaring the bejesus out of me."

See the segment below: