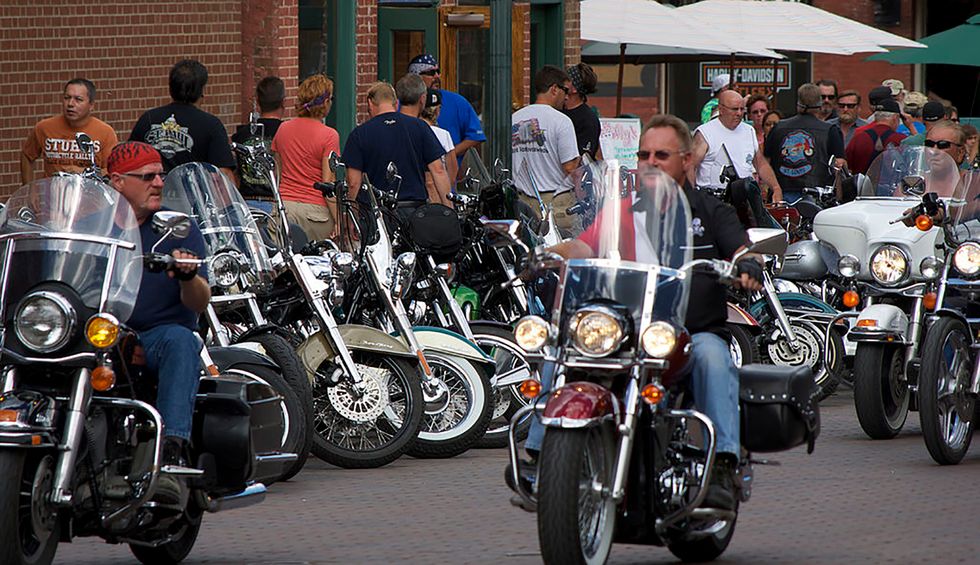 Just as many health officials feared, South Dakota’s annual Sturgis Motorcycle Rally is on its way to further the current health crisis. Cases of the novel coronavirus continue to grow nationwide and with bikers from across the country returning home from the event states are bound to see an increase in local cases. More than 100 COVID-19 cases have been linked to the event so far, the Associated Press reported.

The event brought at least 250,000 individuals, many who attended maskless. According to Camber Systems, which collects and analyzes cellphone data, 61% of counties in the U.S. have been visited by someone who was at Sturgis. Multiple states have already reported cases linked to the 10-day event which began Aug.7.

“Imagine trying to do contact tracing for the entire city of (Washington), D.C., but you also know that you don’t have any distancing, or the distancing is very, very limited, the masking is limited,” Navin Vembar told the AP, co-founder of Camber Systems. “It all adds up to a very dangerous situation for people all over the place. Contact tracing becomes dramatically difficult.”

According to the North Dakota Department of Health, cases in at least eight states have been confirmed to have been linked to the bikers’ rally. By Monday, the department noted 17 additional people “who are connected” with the rally tested positive for the virus, NBC News reported. "Those who attended the rally should closely monitor for symptoms & get tested at a free ND testing site," the agency said. As of this report, a total of 103 cases have been confirmed. Cases have been reported in both the Dakotas as well as Minnesota, Montana, Nebraska, Washington, Wisconsin, and Wyoming.

Director of the Minnesota Department of Health's infectious disease division, Kris Ehresmann, told reporters during a press conference that the department expects more cases to emerge in connection with the Sturgis event. "Thousands of people attended that event, and so it's very likely that we will see more transmission," she said.

The rally received widespread criticism after photos and videos depicted crowded areas with barely anyone wearing a mask. “I sat at a bar elbow-to-elbow with guys. No one was wearing masks,” Stephen Sample told the AP, an attendee who rode back to Arizona last week.

A survey sent to city residents prior to the rally found that 60% of the fewer than 7,000 residents did not want the event to be held. Residents feared the consequences of the city hosting the rally expressing they would have nowhere else to go, Daily Kos reported. Despite majority residents wanting to not host the event, South Dakota’s Republican Gov. Kristi L. Noem welcomed bikers from all over the country into the state in addition to expressing her hope for more people to come into the state. “We hope people come,” Noem said when she spoke of the motorcycle rally, according to The Washington Post. “Our economy benefits when people come and visit us.”

Like Donald Trump, Noem has also repeatedly downplayed the severity of the virus and pushed for the state to reopen amid the pandemic. Against stay-at-home orders and safety mandates, Noem has not passed any legislation requiring facial coverings in the state.

South Dakota health officials are unsure how many people were infected or exposed to the virus at the event, public health warnings of possible COVID-19 exposure have been issued to at least five businesses popular with attendees. According to officials, one case was linked to a person working at a Sturgis tattoo shop, while another to an individual who spent hours at a bar during the rally, CNN reported.

Most of those who attended the event had no regard for the virus. “We have no concerns—if we are going to get sick, then we’ll get sick,” a couple told The New York Times. Health experts are concerned that without a national testing and tracing system containing infections from an event like Sturgis is “almost impossible,” the AP reported. “We would need a finely orchestrated national system and we are far from that,” Dr. Howard Koh said, a professor at the Harvard School of Public Health who worked at the Department of Health and Human Services under former President Barack Obama. “We are really witnessing a 50-state effort with all of them going in different directions right now.” According to Sturgis’ city manager Daniel Ainslie, at least 850 people in the city will be tested.

Nationwide more than 5.8 million people in the U.S. have been infected by the novel coronavirus. As of this report, at least 178,700 people have died as a result of COVID-19, according to The New York Times database. As residents continue to ignore safety measures and partake in large events, the number of cases and deaths as a result of COVID-19 will continue to rise.