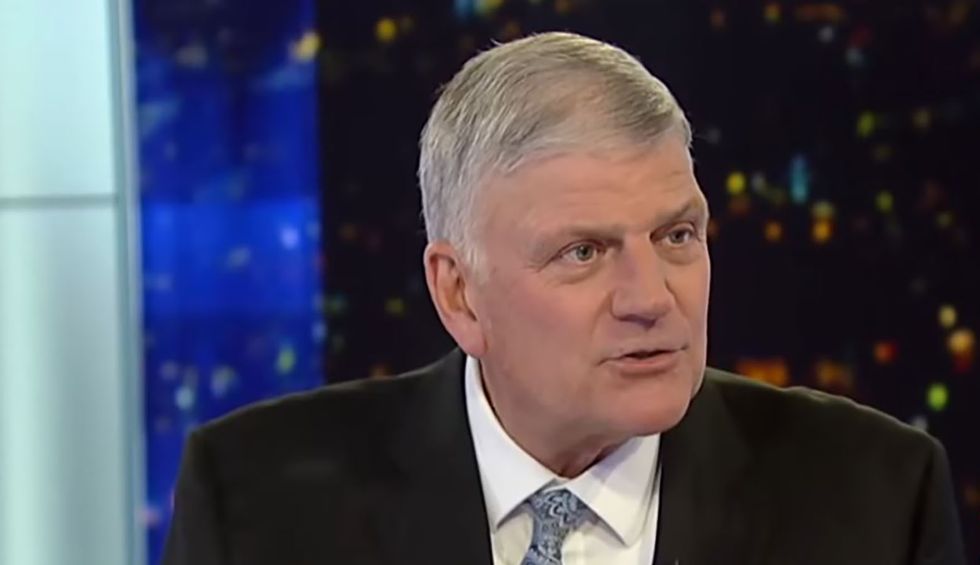 In watching some of the @DemConvention on TV, it's been interesting to see the absence of God. I don’t believe America’s finest hours will be in front of us if we take God out of gov't & public life. It's God who set the standards we're to live by. https://t.co/4acCbnbkUP

I am so sick of this.

Been sick of it for decades.

This year I am just NOT HAVING IT.

I am especially not having it because I was profoundly moved by the way the four nights of the DNC managed to include many, MANY testaments to faith, genuine faith, faith in action, without the kind of in-your-face proselytizing the GOP will try to stuff down our throats next week.

Fortunately I was able to rein myself in before my blood could start boiling.

First of all, I kept myself calm because that’s exactly the kind of “own the libs” reaction Franklin Graham and his ilk want when they post this kind of nonsense.

Second, I kept myself calm because the very next thing in my feed was the joyful noise of #ProgressiveChristianTwitter with an abundance of clapback to soothe my soul and remind me I am not alone:

What are you talking about?

Joe Biden has been a devout, practicing Catholic for 70 years.

The entire convention was about love, tolerance, inclusion, family, and faith.

There is something seriously wrong with you.

I will pray for you.

My main man JohnDPav linked to his fabulous essay defending JRB, stating the obvious: in comparison to DJT, Biden is not the “lesser of two evils”, he is straight up the better man:

Benjamin Dreyer asks a rhetorical question and gets a perfect answer:

Grew up in South Carolina. Baptized in a Southern Baptist church. Married in a Presbyterian Church 26 years ago. Served as a Deacon. Elder. Trustee. Lay Minister. Pray daily. Believe in Jesus. Watched your dad's revivals on tv with my parents.

I will never support Trump. Or you.

Hateradio has been spreading a talking point that Dems took “under God” out of the Pledge of Allegiance.  This was smacked down many times.

The two people below are responding to a tweet that was later deleted in embarrassment after multiple folks posted video of Dems saying the under God” version of the pledge:

They absolutely did not, and the pledge was given each night during the conference! God and specifically Christ was invoked many times during this conference. I'm a Christian and am getting so sick of the lies supporting this evil man Trump, being told by so called evangelicals.

Nurse Jules called Graham out for the bigotry of Samaritan’s Purse during the height of the C-19 crisis in NYC:

Katty McCatnip added with one of my favorite redhat memes:

Andrew Goss and G Shep said a lot with a very few words:

That's why the "Reverend" failed to notice. His concept of religion has very little to do with faith in God, except as a tool to manipulate in His name for consolidation of power and wealth.

So by the time I jumped in it felt like a mere afterthought, but I wanted to add my four tweets and my two cents:

I felt DEEPLY blessed by the thread of faith, hope and love that was woven through the personal stories of almost every person depicted: answered prayer, trust, hope, and the strength to persevere that comes from a lifetime of leaning on the everlasting arms. /2#FaithfulAmerica

A man who claims he's never made a mistake and never asked for forgiveness, in spite of a life filled with remorselessly evil behavior and completely empty of Love, is NOT a man of God no matter what #GOPropaganda says.

Now go read Matthew 7 until you figure out what it means./X