Why relentless enforcement will make or break the new NAFTA 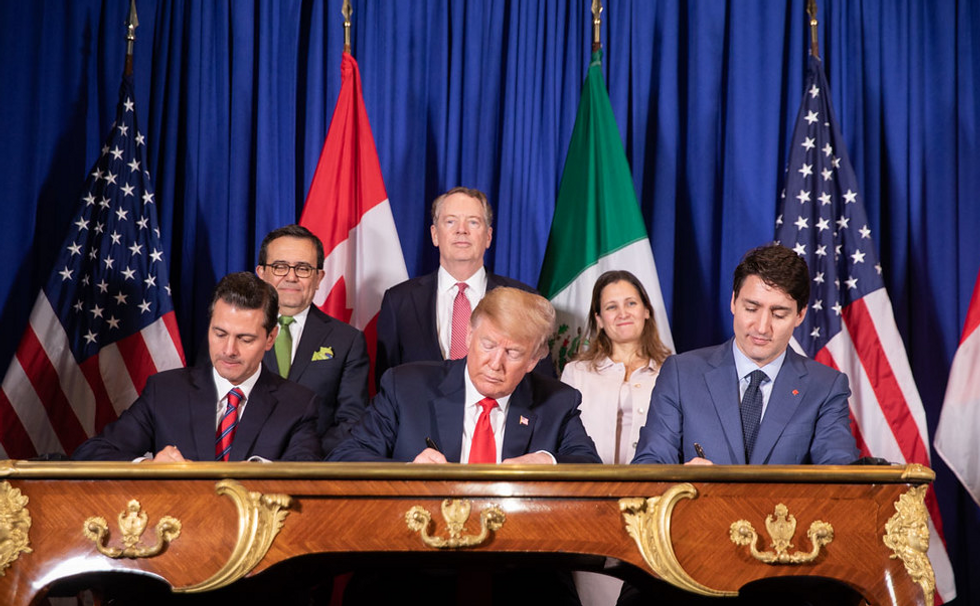 When thugs gunned down Óscar Ontiveros Martínez in May, they did more than silence a promising figure in Mexico’s beleaguered labor movement.

The 29-year-old’s killing sent a warning to anyone still thinking about organizing the mine where Ontiveros once helped to lead a strike.

And Ontiveros’ fate showed that labor activism remains a deadly undertaking in Mexico even though the new North American trade deal theoretically ushered in the first real legal protections for workers there.

Only strict enforcement of the United States-Mexico-Canada Agreement (USMCA), which took effect July 1, will end violence against union activists and give the Mexican people true freedom to organize for better working conditions.

Until then, no matter how lofty the rights enshrined in the USMCA, corporations will continue to exploit workers on both sides of the border.

NAFTA enabled U.S. manufacturers to shift about one million manufacturing jobs to Mexican plants paying workers just a few dollars an hour. When U.S. and Canadian corporations launched operations in Mexico, they did so intending to reap huge profits through the systematic oppression of poorly paid workers like Ontiveros and his colleagues at the Media Luna Mine, which is owned by Torex Gold Resources of Canada.

Mexican workers who tried to organize and improve their lives faced severe repercussions from corporations, their corrupt government cronies and employer-controlled protection unions.

Ontiveros was the fourth organizer of the Media Luna strike to be gunned down in three years. A fifth colleague, Oscar Hernández Romero, disappeared in October. The murders remain unsolved, and no trace of Hernández has been found.

The USW and other labor unions long fought for a new trade deal that ended the servitude of Mexican workers and created a more level playing field for their American counterparts. And in January, thanks to the hard work and support of labor unions and their Democratic allies, Congress passed the USMCA with the pivotal labor protections America’s unions demanded.

On paper, the USMCA gives Mexican workers the right to organize democratic, independent unions like the one Ontiveros tried to establish at Media Luna. It requires the Mexican government to eradicate the bullying of union activists and rewrite the thousands of sham labor contracts that employers foisted on powerless workers for a quarter-century under NAFTA.

The agreement provides Mexican workers a mechanism for reportinglabor violations, and it enables the U.S. and Canadian authorities, unions and other parties to investigate suspected abuses. Corporations that violate labor protections could even have their goods blocked at the U.S. border.

These provisions have life-changing potential for millions of families throughout North America.

Free to organize unions without risking their lives, Mexican workers could at long last throw off corporate tyranny and negotiate the family-sustaining wages, decent benefits and safe working conditions their employers denied them. They would even be able to afford products made in the U.S. and Canada.

As these workers improved their standard of living, corporations would lose the incentive to shift U.S. or Canadian jobs to Mexico. That would end 25 years of offshoring that hollowed out American manufacturing communities, eroded the nation’s industrial capacity and enabled employers to hold down U.S. workers’ wages on the threat of relocating still more jobs. Rising wages in Mexico would even force U.S. and Canadian employers to pay their own workers more.

Instead of being exploited on both sides of the border, workers could use their collective strength to hold corporations accountable.

While the USMCA has the potential to end decades of predatory corporate behavior and lift up workers across the continent, however, the agreement itself isn’t enough.

Enforcement of the new labor protections is crucial to realizing the USMCA’s possibilities. Right now, there are lots of reasons to worryabout Mexico’s ability to effectively police the deal.

Although Mexican President Andrés Manuel López Obrador strongly supports the agreement, the continuing attacks on labor activists show the brazen resistance of corporations and officials at other levels of government.

Ontiveros’ murder occurred five months after Mexico signed the USMCAand pledged to implement all of its provisions—a reminder that anti-worker elements in many parts of the country still prefer to resolve labor disputes with gunfire.

Capturing Ontiveros’ killers—and solving the cases of the other Media Luna activists—would signal López Obrador’s all-out commitment to protecting workers and living up to the letter of the USMCA.

Murder is one risk labor activists still face. Unlawful prosecution is another.

In June, authorities in the border state of Tamaulipas trumped-up charges against labor lawyer Susana Prieto Terrazas, who led strikes at dozens of factories and shamed employers for failing to protect workers from COVID-19.

Prieto knew she’d be arrested sooner or later. And while she refused to be bullied into silence, a continuing atmosphere of fear will have a chilling effect on other organizing efforts just as the USMCA legally paves the way for more of them.

Jailing Prieto enabled authorities in Tamaulipas—one of Mexico’s economic centers—to do more than punish one vocal activist. It allowed them to thumb their noses at the USMCA and mock López Obrador’s pledge to enforce it.

The USW and other unions demanded Prieto’s release. A judge freed her July 1, just as the USMCA took effect, but ordered Prieto to leave Tamaulipas.

If Mexico fails to begin safeguarding labor activists, she might disappear into prison for good one day or even suffer Ontiveros’ fate.

Every day Mexico struggles to implement the USMCA, corporations will continue to exploit workers and keep them from organizing the unions that are essential to protecting workers in all three countries.

As if the resistance of corporations and their allies weren’t enough, the COVID-19 pandemic also has affected implementation of labor reforms.

U.S. labor unions and American officials will have to keep pressure on Mexico to ensure it invests the money, resources and political will necessary to enforce the labor rights that are the linchpin of the deal.

Because if Mexico fails to relentlessly enforce the USMCA, the new trade agreement will be as big a failure as the old.