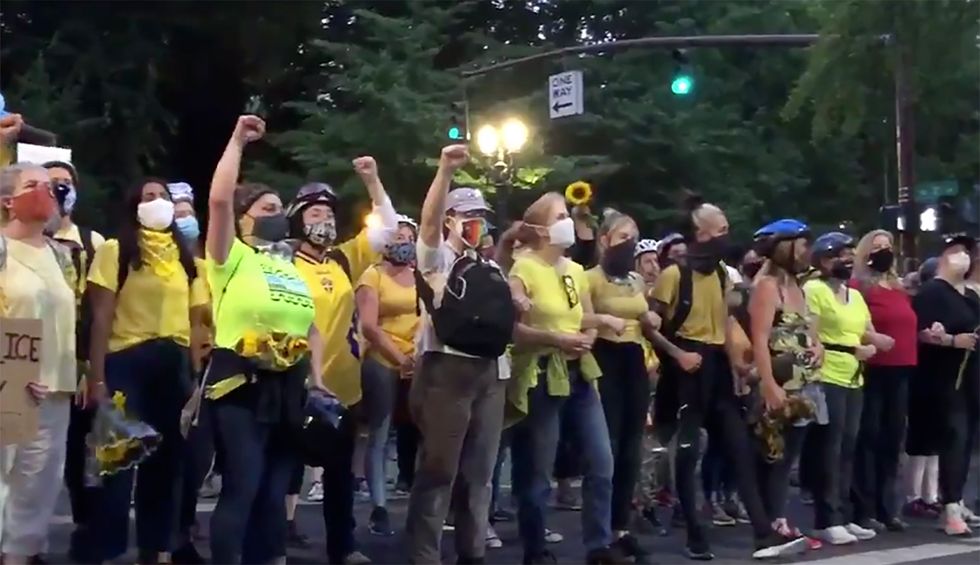 On Saturday several mothers in Portland, Oregon banded together to protect Black Lives Matter demonstrators who are protesting racism and police brutality. President Trump and DHS acting Secretary Chad Wolf have sent Homeland Security paramilitary SWAT teams to the northwestern city against the orders of the governor and mayor.

On Sunday, the moms were back, and there were a lot more.

They were “wielding sunflowers.”

The #wallofmoms is at the frontline and they’ve put sunflowers through the fence. SUNFLOWERS, y’all. They’re fearle… https://t.co/KhB6RY12n3
— Deborah Bloom (@Deborah Bloom)1595225323.0

And federal agents, called Trump’s secret police by some, and an “occupying force” by others, tear gassed them again.

The DHS paramilitary officers wear camouflage, riot gear, masks, have no name tags or any identifying insignias, and drive in unmarked vans.

They reportedly come from several federal agencies, including the Border Patrol’s BORTAC unit, which are SWAT teams. An internal DHS memo, The New York Times reports, warned they are not trained in crowd control. Their presence has “re-energized” the protests in Portland, which were dwindling down before the feds were deployed.