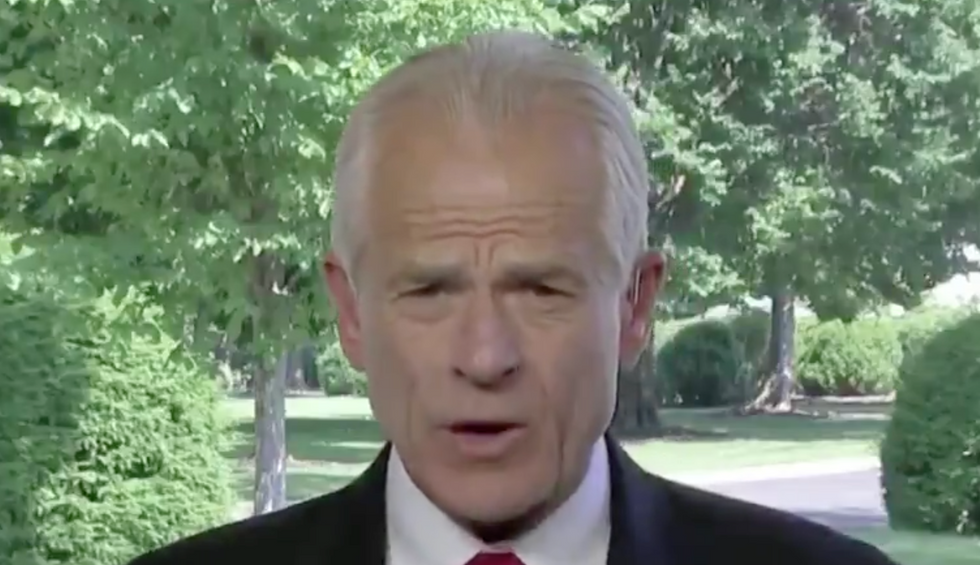 Trump White House Trade advisor Peter Navarro used the long Independence Day weekend to spin a fantastical conspiracy theory that directly blames China for creating the deadly coronavirus, then sending “hundreds of thousands” of its people to the U.S. to infect and ultimately kill Americans.

“It is the Chinese Communist Party that is making us stay locked in our homes and lose our jobs,” Navarro, the author of the 2011 book, Death by China, told MSNBC’s Ali Velshi Friday afternoon.

“They spawned the virus. They hid the virus. They sent hundreds of thousands of Chinese nationals over here to seed and spread the virus before we knew,” he continued, refusing to respond to Velshi’s questions.

“So, ah, the dateline is November. They spawned the virus, probably came out of the biological lab. For two months, they hid the virus from the world and the possibility of a pandemic, behind the shield of the World ‘Health’ Organization. While they did that, they vacuumed up the world’s protective equipment, including two billion masks, and,” said Navarro, plowing through Velshi who repeatedly asked if China did this deliberately.

“Here’s the point. While they were preventing any domestic travels from Wuhan to Beijing or Shanghai, locking down their transportation network, they freely sent hundreds of thousands of Chinese nationals on aircraft to go around the world.”

“They deliberately allowed Chinese nationals to come to the United States, Italy, and everywhere in between, who were infected, while they were locking down their own transportation network.”

“Let’s be careful and clear with the words,” Navarro said, very carefully and deliberately gaslighting viewers. “What they did, during this period of time when they knew there was a pandemic, they didn’t allow their people to travel inside of China, they allowed people inside of china who were likely infected to go around the world.”