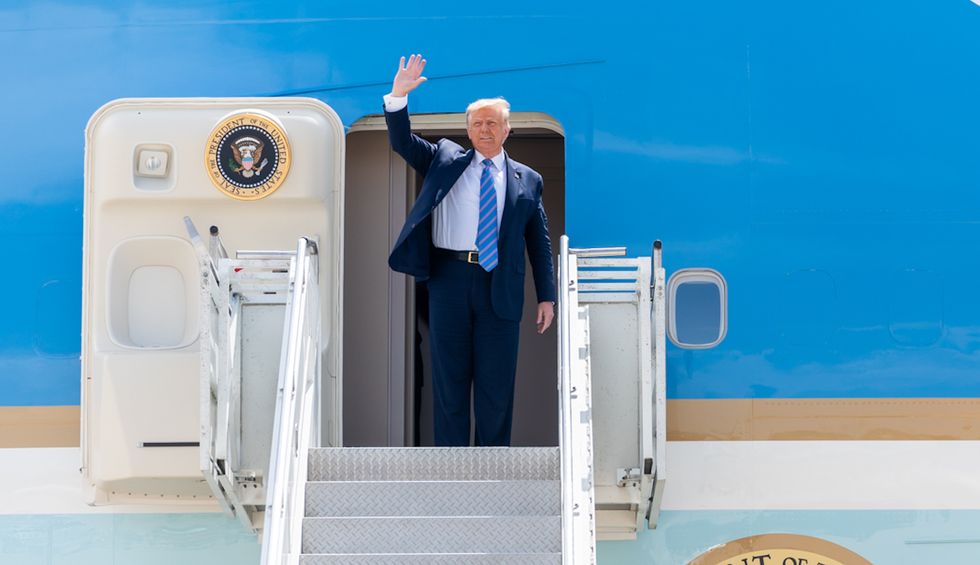 Despite his most inflammatory tweet of the day, President Donald Trump does not plan on moving the date of the November election. As many observers pointed out, his post floating this idea came shortly after news of the devastating economic growth numbers for the second quarter were released, and he was almost certainly trying to change the subject (not that threatening democracy will play well with the electorate). But Trump is likely aware that he lacks the power to move the election, and there's no sign that he's seriously lobbying his congressional allies to do so, especially since they'd need House Democrats to agree.

Yet his threat to democracy is real. Trump gave away the game on his plan to manipulate November's results in a follow-up tweet on Thursday:

He has been laying the groundwork for this attack for months now with his aggressive and bogus criticisms of mail-in voting. This campaign has drawn some quizzical responses since it's clearly discouraging Republicans from using mail-in ballots as they have done — quite effectively — for decades. Given that we're in a pandemic, one that will surely be ongoing if not resurgent in November, it seems on its face to be a form of self-sabotage for the president to discourage his own supporters from the safest form of voting.

But Trump's second tweet sets the stage for his strategy. If Democrats dominate mail-in voting, that may mean Trump could lead when the Election Day ballots start to get counted on Nov. 3. If Joe Biden has won, that may only become evident when the mail-in ballots are counted. Because there's likely to be a surge of mail-in voting, state election operations are likely to be underfunded, and the Trump administration seems to be deliberately slowing down the mail, it may take a while for these votes to be counted. It could potentially take weeks.

And there are bound to be other irregularities, as well, because there always are. What happens if the Post Office slows down delivery of the mail, and it's not clear if a certain set of ballots were sent at the right time? This kind of dispute — and many others — could lead to tense legal challenges.

The president is already making it clear, however, that he wants to simply accept the results as they're first reported Tuesday night (he'll surely do an about-face if Biden is the winner early on). Of course, this is a completely baseless demand. States are obligated to count all votes legitimately cast, and they are allowed time to do so:

Except that federal law gives states *at least* 35 days after the election to certify its results—and for good reas… https://t.co/ko0DnzTWRN
— Steve Vladeck (@Steve Vladeck) 1596140854

So there's no legal argument on the president's side, just as he has no authority to change the election date. But that doesn't really matter. Many people pointed out in April that, despite Trump's demands that states reopen their economies prematurely in the face of the pandemic, the president had no power to boss the governors around. But Trump won that argument — and triggered a resurgence of the virus — because the GOP will follow him off any cliff.

Trump's real power is his control over his voters and his party. He's coaching them to treat mail-in ballots as illegitimate — even as he hopelessly tries to make a distinction between mail-in and absentee ballots, which he uses (they're the same). If he wins the Election Day vote, but fears — as seems likely — that a deluge of mail-in ballots will hand the race to Biden, he could push to undercut these votes.

And he'd have multiple allies in that fight. For example, Republicans control the legislatures of Pennsylvania, Wisconsin, and Michigan — three crucial swing states. State legislatures are fundamentally in charge of determining how electors get selected for the electoral college. Of course, right now, in most states, the candidate who wins the most votes in the state gets all the electoral votes. And in theory, the legislatures shouldn't be able to change the rules after the votes have already been cast. But what if the ballot counting is dragging on, and legal disputes are breaking out. Irregularities will abound, and feed conspiracy theories. A GOP swing state legislature infected by Trump's propaganda may try to claim that the election is inherently corrupted, and it may decide to take matters into its own hands — and hand victory to Trump.

Could it actually do that? It's hard to say in advance, but any attempt would inevitably end up in court. There, the legal challenges would meet more Trump allies in the form of conservative judges and justices, who just happen to have a majority on the Supreme Court, where any consequential dispute would inevitably end up.

Chief Justice John Roberts may give the president's opponents some hope. He has been willing to break with Trump and the entire Republican Party in many high-profile cases in recent decisions, sometimes shocking his liberal critics. So there's no guarantee that he'd be in the bag to hand the election to Trump.

There's a big caveat here, though. One consistent feature of Roberts' jurisprudence, including in recent rulings, is a clear hostility to voting rights. The only consistency in his judgments on this front seems to be favoritism for moves that suppress the vote and help Republicans. So it wouldn't be surprising if Roberts led the court in a repeat of Bush v. Gore in some heated legal battle, handing the election to Trump.

It wouldn't even need to be this blatant, because the key to Trump's strategy is chaos. If, after some set of legal disputes and quarrels over which ballots are legitimate, there's no clear winner in the Electoral College, the decision gets sent to the House of Representatives. But because of a quirk in the Constitution, each member doesn't get their own vote — there's only one vote per state. This system would seem to favor Trump.

It's not clear the president has thought all this through and gamed out a complete strategy. He's not much of a planner. But he clearly knows the polls are not looking good for him, and it's undeniable that — as he did in 2016 — he's laying the groundwork for challenging the legitimacy of the election. The terrifying thing is that it could work.